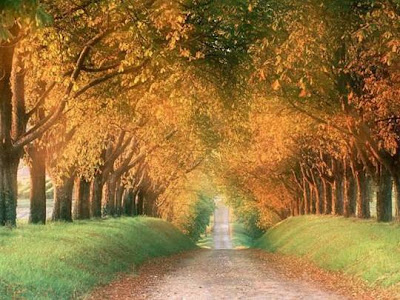 **********
We didn't know if it would arrive, but Indian Summer is here at last. It promises to be 73 degrees tomorrow!
The American Meteorology Society defines Indian Summer as "a time interval, in mid- or late autumn, of unseasonably warm weather, generally with clear skies, sunny but hazy days and cool nights. At least one killing frost and a substantial period of cool weather must precede this warm spell for it to be considered true Indian Summer. It can last a few days or a few weeks.
Walt Whitman was elegaic about Indian Summer: "that wonderous second wind" with its "mellow, rich, delicate, almost flavoured air: Enough to live -- enough to merely be."
In Europe, Indian Summer is sometimes called St. Luke's Summer, as the saint's feast day is October 18. In Italy, Portugal and Galicia (Northern Spain) it is observed with festivals or celebrations of Celtic origins in which bonfires, roasted chestnuts and wine have an important role.
The term Indian Summer has been used for at least two centuries. The term's first appearance in writing is credited to St. John de Crevecoeur in rural New York in 1778. "Sometimes the rain is followed by an interval of calm and warmth which is called Indian Summer," he wrote. "Its characteristics are a tranquil atmosphere and a general smokiness."
The spoken phrase probably originated with the Colonists. Does it actually have anything to do with Native Americans? Possibly. It may have been called Indian Summer because this was the traditional Native American harvest and hunting season. Or, Native Americans may have used this time to conduct raids on the settlers before winter set in.
Another theory is that the predominantly Southwest winds that accompanied the Indian Summer period were regarded by the Indians as a favor or blessing from the Great Spirit.
Early settlers may have equated Indian Summer with Fool's Summer, as it lulls us all into thinking that winter is still very far away.
**********
There is a harmony In autumn, and a lustre in its sky, Which through the summer is not heard or seen, As if it could not be, as if it had not been!
Percy Bysshe Shelley

Delicious autumn! My very soul is wedded to it, and if I were a bird I would fly about the earth seeking the successive autumns.
George Eliot

**********
The gilding of the Indian summer mellowed the pastures far and wide. The russet woods stood ripe to be stripped, but were yet full of leaf. The purple of heath-bloom, faded but not withered, tinged the hills...
Charlotte Brontë
Posted by Julie at 6:19 PM

Lucky you!! Ive woken to another cold morning here! No frost today, but a chill wind blowin' over the fileds, and I am off upstairs to find some woolly socks!

Beautiful post and poetry.
When I was in New England there was an Indian Summer.It was lovely. All the trees had turned colors and the sky was bright blue and it was warm. Enjoy!!

Wonderful Autumn quotes. I have been reading a lot of poetry lately to soothe my soul.
We are finally having some cooler weather down here, a nice change from the usual warm and muggy.

I found your blog through a friends blogroll. You have a beautiful place here and I plan to visit often.

No Indian Summer here but the weather is very pleasant just the same. Will e-mail you tomorrow.

Charlotte Bronte's reference to Indian Summer...as she was writing across the pond!

Beautiful picture and poetry. I love Indian summer. We have been having temps in the 80's again but the skies are a bit hazy from all the smoke.

Enjoy your Indian Summer, lovely quotes, Autumn comes a very close second to Spring for me *!*

We had our Indian Summer all of last week but now it's turned really cold so I guess it's over! I enjoyed reading how the saying Indian Summer came about and also love all the quotes!! xox

Finally some nice weather here as well. After weeks with rain.