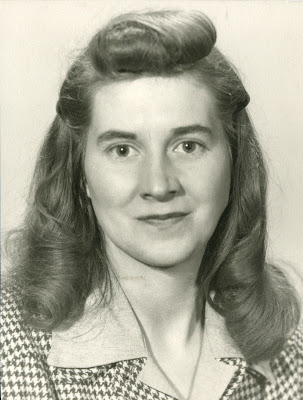 MYRTLE OPAL MUNRO
It will be 20 years ago this fall that my mom died, but I don't want to remember that terrible November day in 1987. Instead, I want to look back at her life today, October 1st, the day that would have been her 86th birthday.

I love this photo of Mom in her early 20s. Myrtle Opal Munro was a pretty, slim young girl with her whole life ahead of her. She looks so poised and confident to me. Unfortunately, my mom had a lot of hard knocks that robbed her of much of her outer beauty, but left her inner beauty intact.

Mom was teased from an early age about her name: "Myrtle the Turtle, wears a tight girdle." I tried to tell her she had a proud name, with a brilliant fiery gemstone for her middle name and a noble plant for her first name. (In addition to crowns of laurel, champions were also given crowns of myrtle.)

Not long after this photo was taken, Mom had to have a cyst removed from her face, and was left with a scar along her jawline. Although it was about four inches long, it was very faint in my mind. But she thought it ruined her face. I think that was the beginning of her losing her confidence and self-assuredness. It didn't help, either, that although she was the first in her family to attend college, she had to cut short her studies and return home.

The worst was yet to come, though, and that was me. At age 27, she discovered she was pregnant by her boyfriend, Sonny. (I only learned about him two years ago - she never spoke his name to me.) When she told him she was going to have his child, he said goodbye and was never a part of our lives again. My mom went to the Florence Crittendon Home in Fargo to await my birth.

Either before or shortly after I was born, my mom made the momentous decision to keep me. This did not happen very often with Florence Crittendon girls, who were usually forced to give up their babies. But my grandma, aunts and uncles had agreed that they would welcome me into their home. It was an extremely courageous act for my mother to bring me back to Crosby, back to the small-minded, small-town gossips. (When she was angry with me she would say, "I didn't have to keep you, you know.")

When I was four, she married my stepfather and they moved to the village of Larson. Within a few years, she had three other children. Was it having a tiny house overrun by four rambunctious kids? Was it being trapped in a village and not knowing how to drive? Was it the lack of outside support? Was it having a spirit-killing husband?

Whatever the reason, it soon proved clear that my mom could not cope. She couldn't keep up the house; she couldn't keep up her personal appearance. I hate to admit it, but I was ashamed to bring friends over to my house. Her food was tasty, but it always looked "smooshed up" and her fresh bread was coarse and full of holes. How petty those complaints of mine seem now.

She had few friends, most of them being the sanctimonious "church lady" types who secretly looked down their noses at my mom. My stepfather never bought her a single present for her birthday or at Christmas. If she wanted a box to open at Christmas, she had to buy herself a robe and wrap it. As adult, I was able to give her a measure of happiness by sending her fresh autumn flowers on her birthdays. She dabbled in art, and I would send her art supplies, but her work was primitive and messy. I wish she could have had art lessons or any other kind of outlet for her creativity.

My mom was, I think, just too fragile for this world. She eventually had a total "nervous breakdown", which is what they still called it in the 1970s. I never learned what the actual diagnosis was. She eventually got better, but she was never completely cured. When my brother, John, was killed in a car accident at age 25, it just about killed her too.

For all my mom's shortcomings, she was a beautiful person. She was a warm-hearted lady who loved nature. She was the one who taught me to appreciate flowers and birds and North Dakota sunsets, which she always said were "the most beautiful in the world."

She was wonderful to her mother, my Grandma Julia. My Aunt Mary, on the other hand, sneered at my mom, and she was mean to Gram. Mom was a great letter writer, corresponding faithfully with her old friends and her female cousins. She wrote me lots of letters too. I wish I had written back more, or called more often. Mom never asked for much, and she never had much, but she always gave abundantly of what she had.

One of my Mom's favorite poems was called "High Flight." The poem describes a pilot's ecstasy while flying. One line of the poem describes "the surly bonds of earth." I think the world was, in many ways, a surly place for my mom. On November 18, 1987, Myrtle Opal Munro Johnson "slipped the surly bonds of earth, and touched the face of God." I like to think my mom is now basking in the glow of God's love for his beautiful Myrtle Opal. Happy Birthday, Mom. 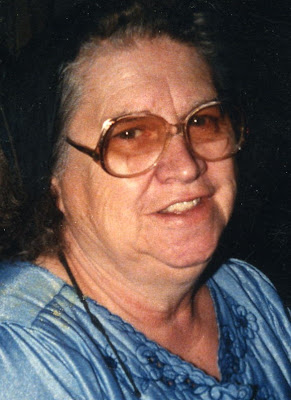 What a beautiful tribute to your mom. It sounds like she was a very special woman. Happy birthday Miss Myrtle...

I see a lot of you in the young photo of your mom! She was a brave and loving soul! I know you miss her.

Beautiful mother you have there.

Julie, I am in tears reading this... what a beautiful tribute to a woman who was your mother. I love her name. I love how you have told us her story - the whole truth - that is wonderful! thankyou for that xoxo

This is so touching. The times she grew up in were so hard for women who didn't follow the rules. She did follow her heart though and kept you....That was most important. Can't help but wonder what kind of phenomenal woman she would be in todays world.

A lovely tribute. Thank you for sharing all of this, including the old photos of course. I love old photos.

Many hugs to you,
Mari-Nanci

These anniversaries always bring back lots of memories, don't they?
This is a lovely tribute to your mother, especially because it honestly shows how much you loved her, for who she really was. I think all of us truly want that, more than anything else in life.

dThanks for sharing such a lovely remembrance of your dear mom. She certainly had a lot to cope with; but I'm sure your love for her kept a warm spot in her heart alive. Please vist: http://janepoe.blogspot.com/ for a wonderful poem that reminded me of my mom. . .perhaps it will for you too.

Oh Julie, that post has the tears running down my cheeks...my heart went out to your mom. Life certainly wasn't very kind to her and it's no wonder that she ended up with a total breakdown...isn't it wonderful, though, that she still kept her inner beauty shining through it all! Happy Birthday to Myrtle Opal...I can see her now, smiling down on you, her heart light and free:-) xox

What a beautiful tribute to your mom! I'm glad I've found your blog - I'd like to think I'm a little better person for having "met" you.

This is such a beautiful tribute to your mom. She must have been very strong. Thank you for sharing her with all of us. And I think her name is lovely!

oh Julie, tears are running out of my eyes, what a wonderful soul your mum had and what a beautiful gift Myrtle Opal gave you Julie, a mother's love *!*

What a wonderful tribute Julie. Thank you for sharing your Mom with us ~ she didn't have an easy life, but she had a beautiful daughter, I am sure she smiles down at you.

A wonderful heartfelt tribute to your dearest mother from her daughter with love..

Edger Allan Poe wrote
~In the Heavens above..the angels whispering to one another..
Can find among their burning terms of love..none so devotional as that of
~mother~
hugging you NG

Today, I finished a little handsewn angel for you.
I dare to give her a name:
Myrtle Opal

As soon as I can and our situation change, she will be flying in your direction.
I hope you enjoy it alot.
Today she gave me such a nice company.
She chose her embellishments
And my daughter make you a bookmark for your reading, too.
Thank you Julie for being my friend. God bless you!