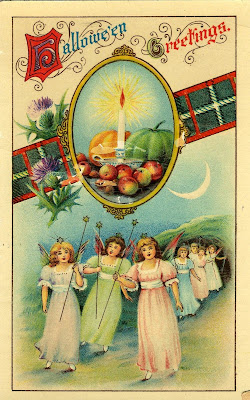 A fairy parade with a Scottish touch,
**********
Recently I wrote about the Irish immigrants bringing elves, goblins, sprites and brownies to the celebration of Halloween, as illustrated in vintage postcards. But we mustn't forget that the Irish also brought the fairies (or sidhe - pronounced shee or shay).

Fairies are especially active at Halloween, for this night they are leaving their summer homes, the fairy mounds in the hollow hills, and traveling along ley lines to their winter barrows.

Fairies aren't evil, but they are mischievous. They like rewarding good deeds, but they don't like to be crossed. Fairies were thought to disguise themselves as beggars and travel from house to house looking for handouts. The folk who gave them food were rewarded, while others who didn't received . . . repercussions.

Touchy and easily offended, fairies don't like to be talked about much. If you do speak of them, call them by their Gaelic nickname, "Daoine Maithe", the good people.

If you would like to leave a treat for the fairies this Halloween, put out some barley or milk, for they love these foods. Or you can even them some beer, for it is made of barley!

The Halloween fairy postcards I've seen all seem to paint fairies in a very benevolent light. 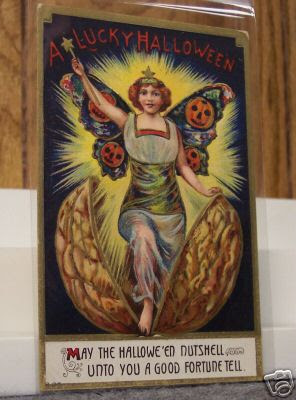 This fairy seems to be connected to the practice of divining one's romantic future from nuts placed in the coals of a fireplace (I wrote about this in an earlier post). 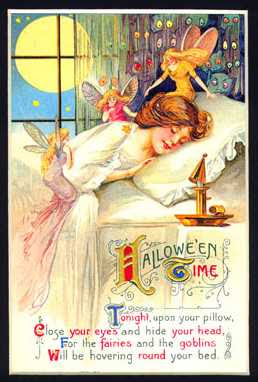 In a previous post regarding Halloween superstitions, I wrote that I owned most of the postcards illustrating the post. I collected most of my postcards years ago, thankfully. Some Halloween postcards have become incredibly expensive, including this fairy postcard by John Winsch. It now sells for a minimum of $100.00. I only own one of the postcards featured here (the one at the top of the post). 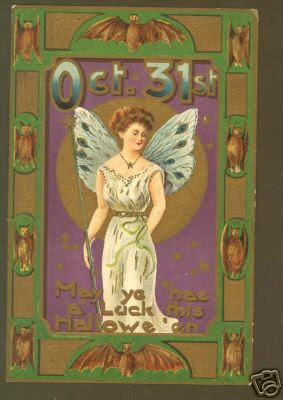 Isn't she a beautiful Halloween fairy? 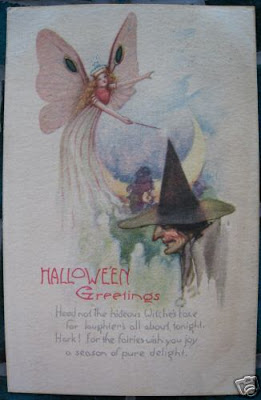 This fairy seems to be doing a witch-protection spell. 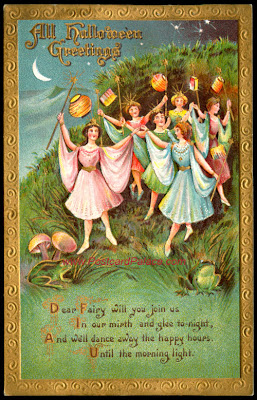 These are not fairies but young girls inviting
the fairies to their moonlight dance!
Posted by Julie at 2:19 PM

I so enjoyed reading this Julie. I have never seen fairy halloween postcards. I may gain a new appreciation of halloween with the addition of this very interesting icon.

Oh Julie, you knew I would absolutely love this post!! I, too, have never seen Faeries featured on Halloween cards so these are all new to me...I didn't even know they were associated with Halloween! Wonderful post!! xox

I love this post! And the postcard of the "scottish" faeries!

wonderful Julie!! what a fab collection of cards to own - lucky you! i never tire of seeing them!

where my sacred site is, under my pine tree.. where those faery mushrooms spring up.... I believe that there is a ley line... or a vortex.... I am always careful at times like midsummer and Samhain not to go traipsing down there just incase... I may be whisked away to faery land....
have a wonderful Samhain/Halloween xoxo