ANOTHER LADIES' NIGHT OUT The ring for marriage within a year;
The penny for wealth, my dear;
The thimble for old maid or bachelor born;
The button for sweethearts all forlorn;
The key for a journey to make all right;
And this you will see next Halloween night.
In my previous post I wrote about the Will Moses poster "Ladies Night Out." Back in Victorian times, women celebrated another kind of ladies night out on October 31. They would gather at parties to participate in rituals of a romantic nature. This event was sometimes called Witch Night.

I condensed the following "Witch Night" information from an article called "Halloween Fortunes" by Satenig St. Marie which appeared in the summer 1990 issue of Victorian Homes magazine. (Yes, I'm an article clipper.)

The hostess for the party would make handwritten invitations lettered with broomsticks, witches, a new moon and branches of witch hazel, for witch hazel is the sacred flower of Halloween. The day of the party, witch hazel branches were gathered for decorating the house.

The first event of the party, which would begin at 9 p.m. sharp, was the ceremony of cutting the Halloween Cake containing charms of fortune. One lady, designated Dame Halloween, had the responsibility to make the ceremony meaningful. Of course, the lady who found the ring in her slice of cake was the luckiest of all, for she would be married within the year.

Next, at 10:00, came the apple hunt. Earlier in the day, the hostess had hidden an apple for each lady throughout the house. When all the apples were found, the ladies gathered in front of the fireplace to again test their luck. First, they pared the apples, hoping to maintain one long unbroken peel which they then threw over their shoulders to determine the initial of their true love.

Next, they counted the seeds in their apples:

**********
One, I love;
Two, I love;
Three, I love, I say;
Four, I love with all my heart, and
Five, I cast away.
Six, he (or she) leaves;
Seven, he (or she) loves;
Eight, both love;
Nine, he (or she) comes;
Ten, he (or she) tarries;
Eleven, he courts; and
Twelve, he marries.
**********
The third destiny-testing activity was the burning of the Halloween nuts. Each young lady placed two nuts (often hazelnuts) side by side on the glowing coals of the fireplace, naming one for herself and one for the one she was dreaming of. If the nuts burned together, it was a sign that all would be well. If they snapped apart, or did not burn at all, the friendship would be tested.

Finally, each young lady, armed with a lighted candle given her by Dame Halloween, would go into a darkened chamber to find a package with her name on it. Would she encounter ghosts, or emerge safely with her package?

After the young ladies all returned to the drawing room, hopefully with their favors safely in hand, they would have a midnight supper. The party ended with them joining hands and singing.

"By then, the hour of ghosts was past, a glimpse of their destiny had been foretold, and for those who did not have their romantic wishes fulfilled, there was always next Halloween to test their luck again." 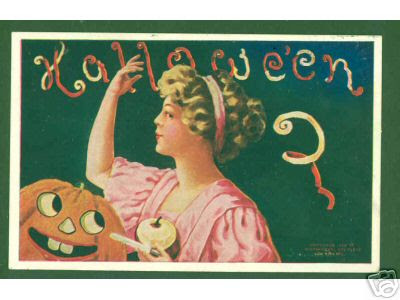 Above: What initial will the apple peel reveal?
Below: Another variation on burning the hazelnuts in the coals: 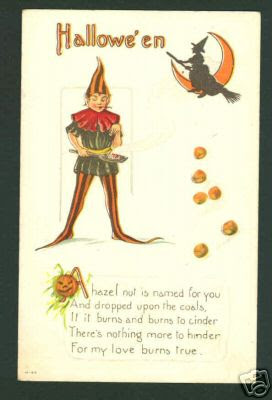 A hazel nut is named for you
And dropped upon the coals,
If it burns and burns to cinder
There's nothing more to hinder
For my love burns true.
**********
I finished writing this post and then went to check out other posts. Imagine my surprise when I found that Leanne (www.somersetseasons.blogspot.com) wrote a post today about Apple Lore.
Here's what she said about tossing the apple peel over one's shoulder:
St. Simon and St. Jude,
on you I intrude,
By this paring I hold to discover,
without any delay, tell me this day,
the name of my own true lover.
Poor lady - if the paring broke on impact, she would NEVER marry.
Posted by Julie at 6:58 PM

hi Julie! what a great post! Funny that on opposite sides of the atlantic we were both writing about apples at the same time! No problems with you using the poem I found, I may 'borrow' your apple paring postcardin return! its fab!

This is so interesting Julie - never heard of these Halloween traditions before.

Am almost done with that book and will get it mailed off hopefully before leaving Monday!

I love reading your posts, Julie, because I'm always shown wonderful images and I learn so much. You've been busy reading and thanks so much for the 'reviews.' Speaking of pumpkins, have you ever baked one with milk inside which is supposed to end up like a pumpkin pudding?
Happy autumn, Green-Eyed Lady.

Wow Julie...lots of fun information here. I love your Girls Night Out poster...and the cute little rhymes with the apple seeds and peels.
xx

I love the vintage postcards, and the traditions you have told us about. Such innocent past times, but I think they probably had a great time.

Hi Julie. You have taken us on a fascinating journey into the past. Loved it. The apple peels/letters was something I had not thought about in literally decades. What a darling visual.

Wandered to your blog today via Autumn's Meadow. Thanks for sharing all of the vintage images. I love them!

Thank you for coming over to my blog to learn about Kona's name. My little one is more than happy! It was a wonderful thing Annie did for us!

I loved reading about Ladies' Night Out! Sounds like fun to me!
I wish we did more of the things of why back when!
I would love to sit about with the ladies and find true love.
I will be back!

Those Victorian Ladies knew how to have interesting at home evenings didn't they *!*