MOVIES I CAN LOVE 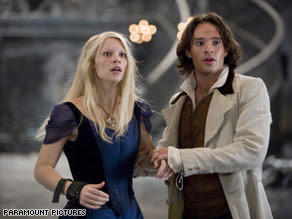 I saw "Stardust" yesterday and it was all I hoped it would be. I give it 4 stars out of 4. I consider it the best fairy tale ever. By the way, it is a fairy tale for grownups. Some scenes would be very scary for smaller children, but older children would enjoy it. Now I must put the illustrated book on my Amazon.com wish list, as even the used books are still very spendy for now.

I am heartened to see a film like this appearing in the theatre, as well as a couple of others I saw this summer and some upcoming films I've read about or seen the trailers for. I have hope for the film industry after all, when it comes to producing films for people - especially women - of a certain age.

There are so few movies I have wanted to see in the past few years. I don't like cartoons, so that leaves out a whopping number of new releases. I don't like horror films, most action flicks, comedies with high-school-boy mentalities, sequel upon stupid sequel, remakes of old TV shows that I grew up with, for heaven's sake.

I want good, meaty dramas and comedies with heart. I saw one of the latter this summer: Kerri Russell, whom I really like, appeared as the pregnant title character with a brutish husband in "Waitress", who dreams up scrumptious pies for the pie diner in which she works. (I have never heard of a pie diner. Is that a regional thing?)

I also saw "Evening" with a stellar cast that included Claire Danes, Meryl Streep and her daughter Mamie Gummer, Vanessa Redgrave and her daughter Natasha Richardson, Glenn Close and Toni Collette. Although I should not have, I read the reviews before I went to the movie, and they were not flattering. However, I thought, "How can you go wrong with a group of actresses like that?" I was right. I was totally engrossed by the film, which I liked far better than the book it was based upon, by Susan Minot. That will teach me to pay attention to movie critics.

When I went to the theatre yesterday I was surprised that one of the "Showing Now" posters was for "Becoming Jane" about literary lioness Jane Austin. I didn't know it had opened already. I plan on seeing it, even though American Anne Hathaway may not be perfect for the part. It will still be fun to see a lush period drama.

There's also, in my opinion, a great lineup of films opening from now through Christmas. I had better be saving my pennies because I think I will be going to Saturday matinees way more often than I have in the past few years. Here are some that caught my eye:

"Elizabeth: The Golden Age". I have been waiting for this film since I saw Cate Blanchett play Queen Elizabeth I as a young woman. Now she's back for Elizabeth's golden age, and is joined this time around by Clive Owen, one of my favorite actors.

Based on their book counterparts, these should be great: "Kite Runner," "Love in the Time of the Cholera", The Jane Austen Book Club", "The Diving Bell and the Butterfly" and "Atonement."

"Introducing the Dwights" with Brenda Blethyn. I saw the trailer for this so I think it will be very enjoyable.

"The Other Boleyn Girl." As you may know, one of my secret pleasures is English historical fiction. I have the book, by Phillippa Gregory, queen of historical novelists, now I must read it before the movie comes out. The film stars Scarlett Johansson as Lady Mary Boleyn, Natalie Portman as Anne Boleyn and Eric Bana as King Henry VIII. Once again, it will remain to be seen if American actors can fill these historical shoes, but I'll give it a whirl!
Posted by Julie at 12:07 PM

Glad you liked the movie, so maybe I was a little harsh in my review.I am new at doing that and of course I compare everything with Lord of the Rings my favorite movie. I missed Evening I still want to see it but I don't know if it came here or not. I agree that it looks like some good movies are coming out. I want to see more about womens journeys.

A fascinating list of movies (and books to read) to look forward to. Thanks.

Stardust had a double page write up in my weekend paper .... looking forward to seeing this movie and I love Cate Blanchett in anything she has so much class. And yes *!* Clive Owen ... I first saw him playing in a detective thriller called Second Sight ... he played a detective who was suffering gradual blindness ... you just knew he was destined for the big screen *!*

Gosh I have missed so many posts, it can't be that long since I was here...?!
I appreciate the film review, and the movie recommendations. I must make a note of them, as I tend to go to the show more often once the summer is over.

Great accont Julie. I haven't seen the film yet but will look out for it. Just ordered Loreena McKennitts new album...hopefully it will be here soon. Love her!

Hello to you, from across the Pond! Thank you so much for visiting my blog and commenting. {I'm so glad you _could_ comment, as this has been a new-but-on-going problem for me. People not being able to comment in one of my blogs. -sigh-}

Thank you so much for saying that you are enjoying my Smilnsigh blog. I hope you will visit my other blogs some time... My Photos of my City blog. My Grandmother's Thoughts blog. And my Seasonal Pictures blog.

Thank you much for coming over, from Dear Rowan's beautiful blog. And for saying that you too, like/need order around you. And Oh I so hear you on "paring down possessions." I call it "Getting rid of 'stuff.' -smile- Was it William Morris who said words to the effect that... We should have nothing in our homes, which we don't use or find beautiful? His style was too stark for me, but I do agree with those words. :-)

And thank you for your good wishes for my back. It is much better, due to my {finally!} being wise and listen to it.

And on topic for this entry... I love seeing movie suggestions. Thank you. And I'm sure I'll enjoy reading back through your older entries and getting to know you.

I am picky about my movies too, I really dislike stupid comedies I like films with meanings and good stories. I get quite critical of movies and am known to call many 'rubbish'. My friends say I can be too picky and a nightmare to go to the cinema with LOL! xx

Maybe I should run out the movies! It is usually so cool with lots of air conditioning...relief from the heat, and "pure escapism" is also good!
Thank-you for the list!

I haven't seen any of the movies you mentioned so I will have to look for them. Stardust sounds like it will be great!
Kelli

I saw "Stardust" last night. It was fun, and I laughed out loud at least once! Lovely to see Nathaniel Parker if only briefly!
I also enjoyed the qypsy/witch's van...so "folksy" and full of quaint wallpaper and crocheted things.