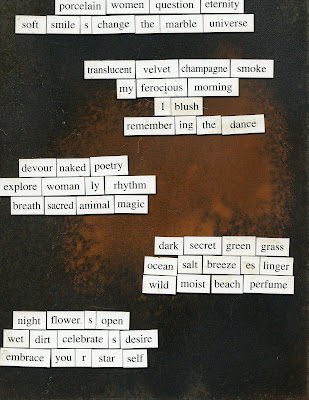 When I was at the arts and crafts fair at the Capital last week, I spotted what was meant to be a picture holder. It's a metal rectangle with a stand, plus four decorated magnets to hold a photo. I, however, thought it would be a great way to compose and/or display my magnetic poetry.

Some people scoff at magnetic poetry as not being creative. I beg to disagree. I certainly would not have come up with those poems "on my own." I don't see it as being any different than going to a poetry class and having a teacher give you "starter ideas."

In any event, I've removed the poems from the fridge and put them on this stand instead. I'll use the reverse side for composing new poems. I also have a new magnetic poetry kit that is advertised as being Haiku.

Haiku is the old traditional Japanese form of poetry containing 17 syllables - 5 in the first line, 7 in the second and 5 in the third. I'm not exactly sure what the makers of this kit thought constituted "Haiku" words - probably a lot of nature words - but they are delicious words and I am eager to get started!
Posted by Julie at 12:20 PM

Hi Julie that's interesting about Haiku poetry - something I haven't known about. I heard an author talking the other day about when she is stuck for words or ideas or needs to make something shorter she cuts lines of words up and let fall to the floor and reuse them how they have fallen *!*