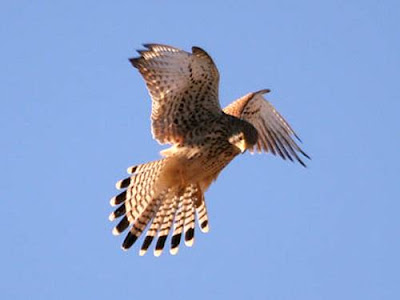 A windhover, or kestrel, a falcon known for its
ability to hover in mid air, even against the wind.
**********
When I was a teenager, I found a little article in one of those "magazines" that came with the Sunday newspaper. Charmingly illustrated, it was a list of actor Richard Burton's five favorite poems. I clipped that article and carried it with me for years. I probably lost it, finally, in our home fire.
It was my great introduction to one of my all-time loves, English literature. One of the poems was "The Windhover", printed below, and another was "Fern Hill," which I will print in my next post. A third was "Miniver Cheevy." At the moment, I can't remember the other two poems, but they may be somewhere in the nooks and crannies of my head.
I loved this poem even before I took a poetry class and learned that this is a poem that MUST be read aloud. And that's where I learned what "sheer plod makes plough down sillion shine" meant (Putting a plow to soil turns up bits of sparkle and shine where the sun hits it, is how our English professor explained it.)
**********
"The Windhover"
by Gerard Manley Hopkins
**********
To Christ our Lord
**********
I caught this morning morning's minion, king-
dom of daylight's dauphin, dapple-dawn-drawn Falcon, in his riding
Of the rolling level underneath him steady air, and striding
High there, how he rung upon the rein of a wimpling wing
In his ecstasy! then off, off forth on swing,
As a skate's heel sweeps smooth on a bow-bend: the hurl and gliding
Rebuffed the big wind. My heart in hiding
Stirred for a bird, -- the achieve of, the mastery of the thing!
**********
Brute beauty and valour and act, oh, air, pride, plume, here
Buckle! AND the fire that breaks from thee then, a billion
Times told lovelier, more dangerous, O my chevalier!
**********
No wonder of it: sheer plod makes plough down sillion
Shine, and blue-bleak embers, ah my dear,
Fall, gall themselves, and gash gold-vermillion.
~~~~~~~~~~~~~~~~~~~~~~~~~~
Stupid, stupid Blogger. Why will it let me double space sometimes and sometimes not?
Posted by Julie at 6:22 PM

New one for me but I will add it to me book against your name. Did you ever hear Richard Burton recite the poem ... sigh would have been a treat just imagining *!*