I HAVE NOT FORGOTTEN, DAISY 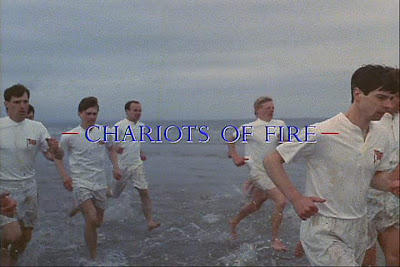 THE OPENING SEQUENCE IN "CHARIOTS OF FIRE"
**********
I have not forgotten that Daisy Lupin had planned to have a three-month long Summer Poetry Fest: June for poems we loved as children, July for poems we loved as teenagers and August for poems we love now. I am overwhelmed to have to choose an August poem, as there are still so many I love. Therefore, I will probably be picking several poems for August, woefully thinking of the many I don't have time and room to print.

So, the first poem is -and it is a total surprise to me, as strange as that may seem - "And Did Those Feet In Ancient Times," by William Blake. I say strange, because I only knew this poem as a hymn, from the opening and the ending of "Chariots of Fire," my favorite film of all time! YES. OF ALL TIME!!!

Those who know me well know I am an indefatigable Anglophile - a lover of all things English. I love to read about England - the England of today (the Aga Sagas); the England of the past. The England of Arthurian legends, of Elizabethan times, of Cavaliers and Roundheads, of Shakespeare, the Celts, the Druids, the pastoral times of the 1800s, the Victorian times, the Edwardian Era, the Brits in WWII, I don't care. If it's about England, bring it on!

So, to the time of the movie, Cambridge University, England, in 1920. An entire GENERATION of Englishmen has been lost as cannon fodder to World War I. But who of the new crop of young men from Cambridge will work and push himself hard enough to represent England in the 1924 Olympics as a runner? Is it Andrew, Lord Lindsey, an aristocrat, or is it the Jew, Harold Abrahams? Abrahams is so driven, so determined to prove himself, that we sympathize with him in his quest.

But, in the Highlands of Scotland, we find Eric Liddell, born in China of of Scottish missionaries. Now returned to Scotland ("A Scot whilst I live and breathe") to study in Edinburgh, he is a natural athlete, revered in Scotland first as a famous footballer (soccer player) and then as a runner.

This is the story of how the two come together in the 1924 Olympics in Paris. Fierce rivals, with Liddell having previously beaten Abrahams, they were meant to compete in a race in Paris. But Liddell, a staunch Christian, will not run on Sundays. Because of his faith, he will not run the Olympic heat for his race on Sunday. Can you - can you REALLY - imagine having such principles as that? He has the British Olympic committee over a barrel. How can they fault a man putting his God above his country?
Fortunately, Lord Lindsey steps in and gives his spot in another race to Liddell. So, the stage is set to see if both men can win Olympic Gold for Britain. Will it be Eric Liddell - the Christian runner who feels God's pleasure when he runs? Or Abrahams, the Jew, seeking to erase the lifelong bitterness accorded to him and his race?

I am not going to reveal who won. I love this film so much I would like you to rent it and find out for yourself.

This film is not for everyone. After extolling its virtues to my niece Lisa for years, I purchased "Chariots of Fire" for her for her birthday. She could not get into it (basically saying "What the
----. Are you nuts?)

This is getting way too long for Poetry Fest, so I will now proceed to the poem. But know that I have always heard it sung, as it was in the film, at elder British statesman Harold Abrahams' funeral:
AND DID THOSE FEET IN ANCIENT TIMES
(By William Blake)
**********
And did those feet in ancient times
Walk upon England's mountain green?
And was the Holy Lamb of God
On England's pleasant pastures seen?
And did the countenance divine
Shine forth upon our clouded hills?
And was Jerusalem builded here
Among those dark satantic mills?
Bring me my bow of burning gold!
Bring me my arrows of desire!
Bring me my spear! O clouds unfold!
Bring me my CHARIOTS OF FIRE!
I will not cease, from mental fight!
Nor shall the sword sleep in my hand,
Till we have built Jerusalem
In England's green and pleasant land.
**********

Thanks to Rowan from England for telling me the name of the hymn is "Jerusalem." See her comment.

I've always loved this poem and particularly the music to it and know it as 'Jerusalem' - it is such stirring and uplifting music and I had it played as the final piece at my mum's funeral - a triumphal exit for her rather than a mournful dirge. I think Daisy would have liked it too. I must try and come up with a poem for her August poetry fest as well.

oh dear sweet Julie xo Daisy would be tickled I am sure, that you are continuing this on... you are a treasure xoxo
I will think of a poem..

Daisy would indeed be so proud of you!! I've never watched Chariots of Fire but now you're making me want to:-) A beautiful poem indeed!! xox

That is a beautiful movie! thank-you for the information about the hymn!
You are wonderful to share your curiousity and knowledge!

This is beautifully written and it was wonderful to see the hymn's lyrics in print! This is one of my favorite movies. I had it on Video Cassette and played it so many times that the whole movie was running in slow motion! I do need to purchase it on DVD!