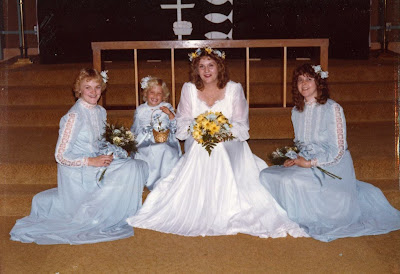 My Sister Glori's wedding day, September 1981. I'm on the right.
**********
Several of you have emailed to see if I'm okay, since I have absented myself from blogging for a while. Thanks for your concern. I am fine, just suffering from eyestrain due to my job.
Recently I've had several projects that have involved perusing very old documents (from Dakota Territory days.) The documents themselves were written in that spidery old copperplate of the time, containing as many as a hundred legal descriptions to comb through. Plus they were very poorly reproduced on film. And the tract books the documents were recorded in are a nightmare too - containing very cramped and tiny writing.
For a while I continued blogging and stopped reading but decided that was foolish so I went back to the books. My eyes are better now so here I am. (BTW, thanks, Robyn.)
~~~~~~~~~~~~~~~~~~~~~~~~~~~~~~~~~~~~~~~~~~~~~~~~~~~~~~~~~~~
Carmen from "Strawberries and Champagne" has asked us to share what was sacred in our lives this past weekend. Carmen is following the "My Sacred Life" project, which is explained in detail in a blog called "Zena Musings" by Carla Blazek (http://www.zenamoon.typepad.com/).
Every day for at least a month, Carla will be posting "a photo from my daily life - something that connects me to spirit. It might be my altar, a candle I'm burning, my dogs, the garden, a friend, a book I'm reading, nature, something I did, someplace I went, something important to me, or who knows, maybe just my morning bowl of Cheerios." The idea, she explains, "is to connect with the holiness of my every day life."
I know I do not have the discipline - or really even the urge - to post a photo every day for a month, and I'm hampered by the lack of a digital camera, but I think this is a very worthwhile project. From time to time I'll post about "the holiness of MY every day life."
What was sacred in my life this past weekend? Getting together with my sister. I have mentioned before that my sister and I have recently been spending more time together than ever before. Her two youngest children are now 20 and almost 17. They're both really great kids, and both work. Glori is finally emerging from the financial nightmare that her deeply-troubled, drug-addicted oldest son put her through, and so has a bit of money to go to lunch and do a bit of shopping.
I am eight years older than Glori, so she was only 10 when I went away to college. It is only in our later years that we've become best friends. I have to say that my little sister is my hero (heroine.) She became a mom at 19, had to leave an alcoholic husband, was abandoned by the father of her two youngest kids and had to be on welfare for a while. But she put herself through nursing school while earning top honors. She has been her family's sole support, and at one time had eight people living under her roof.
She cared for my stepfather (her dad) until his Alzheimer's forced her to put him in a home. An R.N. at a nursing home, she recently won "Employee of the Quarter." I can personally attest to her tender loving care as a nurse, so I know she really deserves the award. I am so proud of her.
While we usually go out for an entire Saturday afternoon, we only got time for a hurried lunch on Sunday, but that time was especially sacred to me, as Glori had just returned from a funeral for the youngest son of a family she was very close to while growing up.
I chose the photo above for a reason. Jake, the man who died, was the uncle of the little flower girl in the picture. His seven brothers and sisters have to grieve over the fact that their little brother passed first, a victim of drug and alcohol abuse. The flower girl herself is facing jail due to drugs.
The church in which Jake's funeral was held was the site of our Mom's, our brother John's and our dad's/stepfather's funeral. We also lost our other brother, Ron, recently. To go back home was a reminder for my sister - and consequently myself - of all that our own family has lost.
Every moment I spent with my sister on Sunday - even though full of sad reminiscences, was sacred to me. And every moment that I spend with her from now on will be equally sacred.
Posted by Julie at 6:59 PM

Hi Julie Marie: This is quite a story! Talk about the light at the end of the tunnel. Your sister has emerged triumphant! I don't have a sister, only 2 younger brothers. What a gift that there is a deeper bond between the two of you at this moment of your lives.

Your sister sounds like a very special lady. I'm an only child so have never experienced a sibling relationship, I would have loved to have 'a big brother' in my life. It's good to hear that the two of you are so close now.

drugs are a curse of our society - ripping homes apart and destroying lives. Your sister sounds like a wonderful human - bless her and you too xoxo

Thank you for sharing this with us! And I am so glad to hear that your sister is doing much better and you guys are so close and spend a great sacred time together!
Blessings!

WOW !! You two sound as if you have lost a lot along the way, but have had the courage to grieve over it all and just keep walking. Congratulations. You two know how to live the life. And attitude is a strong point.