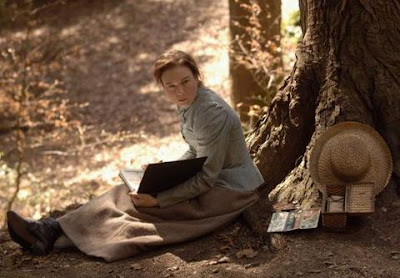 I finally got to watch the "Miss Potter" DVD, and I thoroughly enjoyed it. The film, based on the life of famed children's book writer and illustrator, Beatrix Potter, was enjoyable in many ways.
It outlines the difficulty of a woman of her day in becoming a published author or artist. It also gives a good picture of the repression of women in general during Victorian times. For example, Beatrix' mother was aghast that Beatrix wanted to pay a visit to her printer's office.

"Miss Potter" is also a love story, between Beatrix and her publisher, Norman Warne (played by Renee Zellweger and Ewan McGregor). Beatrix's parents considered Norman beneath their daughter, because as a book publisher he was considered to be simply a tradesman. Their story demonstrates that love needn't be dramatic, or filled with fireworks, but can be friendship that deepens with time into something more.

I loved the costumes and "look" of the film, and Emily Watson as Norman's sister. Best of all, to me, was the beautiful scenery featuring the Lake District of England.

I knew that animation was going to be a part of the film, and I was a little worried, because I don't like animation, but I needn't have worried. The animated scenes are few and far between, they are subtle, and the animals do not speak!

I knew about Beatrix Potter, of course, but what I didn't know is that she was a preservationist. She gave almost all her property - nearly 4,000 acres - to England's National Trust, so that her portion of the Lake District will be preserved forever. I hope to see it some day, still in its pristine state.

Rowan of "Circle of the Year" (link at right), wrote a lovely post about her visit to Hilltop Farm, Potter's home in the Lake District. 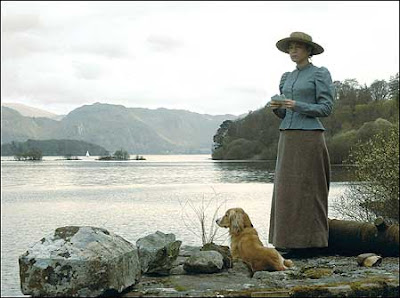 I still haven't seen this, and I really want to. I think I must buy it, as everyone seems to have enjoyed it so much.

I watched this movie for the first time a couple of weeks ago and had made a post about it too...like you, I so enjoyed it!! Having read so many of Beatrix Potter's books, it was delightful to learn more about her personal life, although some parts were very sad. To me, she was a woman ahead of the times. xox

Glad you liked it. What a lovely post you made in her honor.

Thank you for this review of the movie as I have not seen it but keep meaning to! Next weekend I am ~baching~ it dear hubby away so I shall sit and watch it.
Every mother is familiar with Miss Potter's writing but I did NOT know that she was a ~preservationist~
..a woman ahead of her time! hugs NG

P.S. I did not research the ~bee~ because when posting I was filled with grief due to my recent loss and was in the mood for comfort and
looking at my photos of nature comfort me.That particular bee put a smile on my face...particularly ~the butt.~

I loved this movie, my favourite character of hers is Mrs Tiggy-Winkle,a hedgehog who does all the laundry for the other woodland animals *!*

oooh! I loved that one too! Scenery and costumes!

I've heard such glowing reports of this film. And have yet to see it. -sigh- I'm still on a list for it, with Net Flix and at the library.

Someday, I will join the lucky gals who have loved this film. :-)