A DOG FOR ALL SEASONS 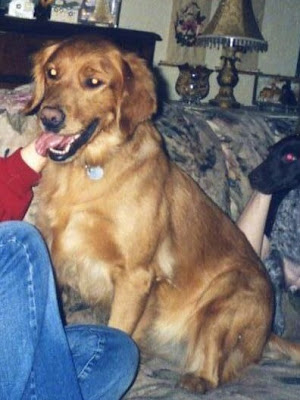 "GETTING SOME LOVIN' - AND THAT LITTLE STINKER
GRACIE BETTER STAY BEHIND ME!"
(Edge of photo far right)
I'm always posting about Gracie - naughty Gracie chewing up Dan's feather pillow; silly Gracie, bringing in flower pots from outdoors, Gracie this, Gracie that. I thought I'd better give some equal time to my beautiful girl, Penny, our Golden Retriever. How do I love thee, Penny? Let me count the ways:

You are so beautiful, a beautiful reddish-brown color. Your coat is never snarled, except for a tendency to get little clumps of knotted hair behind your ears. But you patiently let me cut the clumps out. (But don't let anyone else - and that means the vet - mess with her ears.) I love your gorgeous white rump and under tail. This white coloration in Goldens is not favored by show judges, but who cares? Penny's not a show dog, she's a house dog! When Penny tears across the yard that white rump is waggling like crazy and that tail is whipping like a white surrender flag. (Although her tail is quite bedraggled right now, thanks to Gracie.)

Gracie Who? Gracie, that little monster who came to live in our house last November. Gracie, only seven weeks old at the time, has harassed Penny no end. She has chewed on her tail, her ears, her legs, her snout. Penny has exhibited the patience of Job, only snapping back at Gracie once in nine months. Dan and I tell Penny it is just retribution for the trials she caused our poor old Cocker Spaniel, Lady, when Penny was tiny.

Penny, you are so smart. You love the words, "Wanna go for a ride?" But you don't need the words. For the longest time you have known when I am going for a drive. You just needed to hear my keys jingle or see me put on my coat to be raring to go. But now, now, you don't need outward signals. You just . . . KNOW.

We have our special Saturday mornings. We leave that rowdy Gracie at home and we go do errands. We go early so the car won't be so hot. I roll down all the windows so she can stick her head out and let her ears flap. First, the post office, where dogs are not allowed. Boo! But then to the drive through at the bank. The minute she sees the money canister, she goes nuts. To her, that equates dog treats. However, she has a difficult time realizing that the cashier is going to send treats BACK with the canister. She's trying to devour the canister as I put my deposit in.

Then, if she's lucky, we go to Taco John's, where I have a breakfast burrito and Penny gets - more dog treats!

Sometimes Penny and I just press our heads together, forehead to forehead, her golden one and my going-gray one, and we "commune" with each other. It's all unspoken, but we understand each other very well.

I love our daily morning rituals. Dan and I have taken to leaving our clean laundry hung up in the laundry room downstairs. So every morning Penny grabs her ball, brushes past me (nearly tripping me) as I go downstairs to get an outfit. When I get to the foot of the steps, she is by the laundry area, ready to roll her ball to me. I grab it, throw it to her, then proceed to get my clothes. While I do that, she leaves her ball for me to pick it up once again. One more throw and it's time to go upstairs, Penny once again leading the way.

Penny is not a paragon of virtue. She isn't really fond of a lot of people outside my family, including the vet (see above). "Don't you bring her anywhere?" he asked me. "Well, no" was my feeble reply. She and her ball slime me at every opportunity, she muddies my clothes and -at 70 pounds - she gives me black and blue marks, once in the perfect shape of a paw. Bought for Dan as a Christmas present almost five years ago, she was meant to be a hunting dog. Let's just say - erm - she has a long way to go. But then, Dan's not a great dog trainer either.

Golden Retrievers are known by French-speaking people as "Le chien qui sourire," the dog who smiles. (Hope I got that right.) And certainly Penny fits that bill. And while I'm on my mini French kick, "J'embrasse mon chien sur la bouche." (I kiss my dog on the lips.) No apologies! 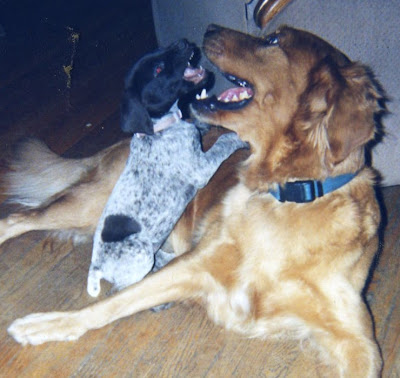 "YOU SEE WHAT I HAVE TO PUT UP WITH? LOOK AT
THOSE SHARP TEETH - AND SHE WAS TINY THEN!"
Did I mention Penny's ball? I do have to admit that when we first got Penny, I wanted to give her away. She was just so "needy." She either needed constant petting, or to constantly have the ball throw for her. I confess to having "disappeared" a few balls. However, getting Gracie has really taken away Penny's constant need for human attention.
And is she ever affectionate! When Kristen came home for Christmas last December, Penny, who hadn't seen Kristen for a whole year, remembered her immediately, and proceeded to lick her for 15 minutes. "Welcome back to the clan, Kristen," (Kiss, Kiss), "I missed you SO much!"
Penny loves winter. Plowing through the snow is great fun for her, if not me. I swear, she could lie down on a snowbank for hours and it wouldn't faze her. Yes, Penny is a dog for all seasons.
**********
"GIVING SOME LOVIN' TO KRISTEN!
(BUT MY YELLOW BALL IS NOT FAR AWAY!)" 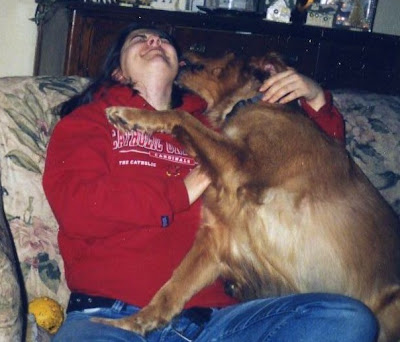 Golden Retrievers are almost always friendly, good-natured dogs, we meet quite a few on our walks in the woods. Penny looks like a real friend and companion.

It's "le chien qui sourit." "Sourire" is the infinitive. And let's be a little more accurate. You hated Penny at first

There is nothing like a dog. Mine is a little half Yorkie half something or other foster child. We got her when she was 6 months old and we are her 4th home. She's almost 5 now. Love her love her love her. In the sidebar of my blog, if you scroll down, you will see her picture. Give Penny and extra squeeze today from me ;-)

Thank you, "Miss French Major Daughter." I knew you would come through for me and help me out on that phrase.

But I never hated Penny. I just disliked her a lot. But how would you know anyway? You were in France that year. LOL

Ahhh...you gotta love our fur friends!! I really enjoyed getting to know all about your Penny and mischievious Gracie! Look at the smile on Gracie in one of her portraits...who said dogs can't smile! She is gorgeous!
Golden Retrievers are such a comfortable dog to be around.

I understand how you feel when you said that you thought it time to give equal time in posting about your pets.
I feel a bit guilty that I had not
posted more images of my sweet Freddi who passed away recently.I was alway giving Paisley exposure as she is always in the garden with me but the two that remained in the house I just never got around to posting..so I am now giving equal time ..equal exposre to my two ~black jewels.~
.. about the DVD..there is never enough time to get everything we want to do it seems so please take your time...
This was certainly a ~feel good~ post! hugs to you and Penny and of course Gracie.. NG

Give Penny a smile back from me and Gracie a hug too!

I don't have a dog - but if I did, one of the breeds I would consider is a Golden Retriever.
My last dog was a King Charles Spaniel...called Hilary (yes! before i ever met Daisy) but she was a complete nutter and chased my chickens so I gave her to a friend ..it was sad, but I love my chickens first :)
I have had border collies which I love but I find I am just too lazy to be a dog owner.. so I play with other peoples dogs. My son has two dogs - an australina blue cattle dog called Tess and a border collie called Kip - they are my grand-doggies

Animals...don't cha just LOVe them? And what a smile your dog has on that first picture! lol. Enough to put a smile on anyones face.