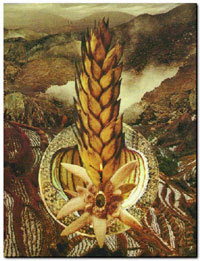 Today is Lammas, the festival of the first wheat harvest, an Olde English holiday I wish we celebrated here. Lammas means Loaf Mass. On Lammas Day, it was the custom to bake a loaf of bread from the new crop of wheat and bring it to church. Parishioners sang "Bringing in the Sheaves" and decorated their church with wheat sheaves and corn dollies. (When an English person talks about corn, he doesn't mean maize, but rather wheat - or other grains, I suppose). Lammas is also known as the festival of the first fruits.

Life size corn maidens and corn men were made and saved through the winter, to be plowed back into the earth in the spring. (Americans celebrating Lammas make corn husk dolls from maize.)

Lammas is the first of three festivals of the waning year. Technically, then, Lammas is the first day of autumn. Maybe that's why I'd like to celebrate Lammas this year. I can't believe that just one month ago I was lamenting that summer was 1/3 over. Now that it's 2/3 over I am sick, sick, sick of summer.

I guess that's not really true. What I am sick of is the incessant, oppressive heat and humidity we've experienced the past month. I am ready for crisp, bluebird fall days and freshening breezes.

Since I'm of Scottish descent, I'll throw in a little bit about Lammas celebrations in Scotland: "Until recent years in Scotland, the first cut of the harvest was made on Lammas Day, and was a ritual in itself. The entire family must dress in their finest clothing and go to the fields. The head of the family would lay his bonnet (hat) on the ground and, facing the sun, cut the first handful of corn [wheat] with a sickle. He would then put the corn sun-wise around his head three times while thanking the god of the harvest "for corn and bread, food and flocks, wool and clothing, health and strength, and peace and plenty." This custom was called the "Iolach Buana."

Lammastide was also a time for feasting, craft fairs and other festivities. Lammas fairs are still held today in England.

In North Dakota, there is no time for festivals now. Hurry is the word of the day. The wheat and other crops must be harvested before the hail and rains bring destruction. Hungry combines, as many as a half dozen in one field, look like giant insects as they scarf up the grain and spit out the chaff. Farmers harvest way into the night, the lights of their combines eerily lighting up the prairie.

By Labor Day, farmers might have a bit of time to attend an old-time steam threshing festival. I attended the Rollag (Minnesota) Steam Thresher Reunion once, and once is forever enough as it is an extremely noisy and dusty affair. But we reserve our true harvest celebrations for later in the fall.

To celebrate Lammas, it is suggested one might bake a loaf of bread or cornbread. Even though it is a bit cooler here today, my oven will not be turned on! Apparently one can substitute popcorn, so I might just make some of that instead.

Lammas is also known as Lughnasadh, an important Celtic holiday. Instead of writing about Lughnasadh here, I'm going to refer you to Autumn for her excellent discussion of this holiday at http://www.autumnsmeadow.blogspot.com/.

Note: Don't forget that our Aussie and New Zealand friends down under are celebrating Imbolc/Candlemas today. For a superb take on that holiday, check out Robyn's blog at http://www.talesofinglewood.blogspot.com/. Robyn asks if I have noticed - and I have - that "most of the Christian celebrations have actually been 'stolen' from pagan and Celtic beliefs."

Below is another Lammas scene. Because of our enormous fields of wheat and sunflowers, and because our state is known as the bread basket of the world, this would be a very fitting table for a North Dakota Lammas celebration. North Dakota isn't exactly known for its grapes, but we do have TWO wineries! As far as pears go, I've only ever seen one pear tree in North Dakota. But what on earth are those two orange-y blobs in the corner supposed to be? 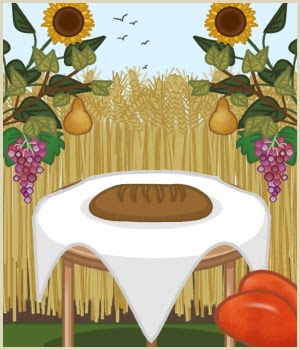 I have enjoyed reading all about Lammas... as you know I am celebrating Imbolc..

I am finding it very interesting that most of the christian 'celebrations' have actually been 'stolen' from pagan and Celtic beliefs. Did you know that I have traced my great-grandfathers family back to Scotland? Not sure where exactly but I am on a mission to find out.. and hey! with Daisy in spirit I will probably have more of a chance! so, Julie.. somewhere we may be related, if not in this life then for sure in a previous one, hee, hee

I hope you had a blessed day..Happy Lammas

I've never heard of this holiday/festival. Thanks for sharing.

I'm glad you found me and I found you. I've been too long away from paying attention to the celebrations of the changing Seasons. You will surely prompt me to stop forgetting.

Where did the pictures of the wheat sheaf etc come from?