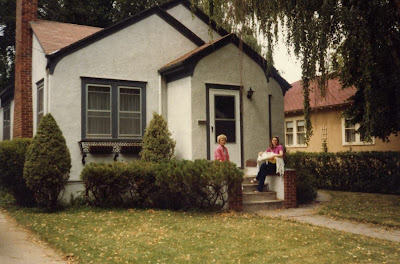 I found this picture recently and thought you might like to see where I live! This was taken the first fall in our new home, 25 years ago. That's my mother-in-law (no longer alive) on the left, me on the right (no longer slim) and my daughter (no longer an infant!)

It amuses me to think how much the house and yard have changed in the past 25 years. The dark gray trim eventually started to peel away and Dan undertook the massive job of scraping it. I had carefully matched the new paint with the existing color and was excited when Dan told me it was the day to start painting. Puttering around indoors, I didn't go out to look at what he'd done until he was almost through with the garage door. I was stunned to go out and find a bright blue door! Obviously the paint did not match the chip, but I had not checked.

Dan was adamant about not re-painting, so ever since we've had a bright blue front door, garage door and trim. I'll never forget what a neighbor said about the new color: (Barely disguised loathing) "Don't worry, dear, it will fade in time." No it hasn't, but that's okay. It looks like the cheerful trim on houses in the Mediterranean.

The evergreen on the left has grown almost as tall as the chimney and I have been thinking for several years that it must go, though I have not broken the news to Dan yet. The beautiful weeping birch on the right is gone, a victim of the tiny bronze birch borer. I have ripped out all the evergreens on either side of the steps and replaced them with flower beds.

We now have a picket fence around the front yard, with an arbor over the sidewalk leading to the house. I grow hardy shrub roses inside the fence on the driveway side. I let the purple lady bell wildflowers grow where they like. They are considered to be a weed by many, but I think they are beautiful intermingled with the roses. I also grow roses and other perennials inside the fence bordering the front sidewalk.

My plans are to make the entire front lawn into a flower garden. The patch on the right will someday be Daisy's garden.

My home is listed on the National Register of Historic Places. I had always thought that the National Register was for grand or famous homes, but that is not the case. A lovely lady in our neighborhood almost single-handedly and successfully ran a campaign to have a group of homes in this area placed on the Register as prime examples of the stucco bungalow style of architecture from the 1920s-1930s.

Our house is not technically a bungalow, because that definition would have to include a front porch. So my home is actually a 1929 stucco cottage. Or, as Kristen called it when she was young, "our cozy little house."
Posted by Julie at 8:35 AM

Love the picture of your house, and hearing how it has changed. Love Hugs and Blessings

I've just seen wild flower photos on another blog - they love them too - some people are funny but if you stop and think its the wild flowers that grow under all the worst conditions that the delicate horticultured types curl up and die. I saw a quote the other day along "the difference between a flower and a weed is a judgement" *!*

some people don't stop and think how tough those wild flowers are growing under conditions that the horticultured ones struggle under ... and just where did the early botanist get plants from ... the wild and "cultured" them for our garden taste *!*

that blue is very popular here right now - I think it is called Tuscan Blue..
your home & garden sound gorgeous and I Love the style.
Our home here in Woodford is a typical mountains weatherboard cottage built in 1927.. so we both live in homes of similar ages... do you have any 'spirits' living with you?

It's an adorable house. I'd love to see a picture of it now. I really want to get a picket fence up around our front yard - and an arbor with a gate. I also like making the front yard a flower garden....I've seen others that have done that and I loved it.
XOXO

I also have pictures of my house and yard from when we first moved here 29 years ago...and yes, it's amazing how different it looks now. Trees that were so little at the time are now huge, other trees are now gone, flowers have replaced grass, grass has replaced weeds, etc! lol I so enjoyed seeing what yours looked like all those years ago:-) xox

Your garden will be beautiful!
This was such a fun post to read. Not actually having an "after" photo was an ineresting exercise for my imagingaton. So much of blogging is instant visual gratification. I tire of that sometimes.
Your daughter's description on your home warmed my heart. You can tell she's been happy there.

I would love to see your house as it is today to compare :-)

We would love to see a current picture of your house!

Hi Julie! You might be surprised if you researched the superstitions (i.e. traditions) behind having a door painted blue...could be an old Celtic thing...maybe? I've noticed many a home in England (and other parts of Europe) where the door is painted blue. I'll check the internet too, for more information.

What a great picture. Thank you for sharing!

I *envy* you, living in a cottage.

i have "cottage lust." :-) I read books/magazines about them, and look at sites with blueprints of them, and etc. Just love them. But due to many reasons, we'll never move from the 2 story Dutch Colonial in which we raised our family.

But... I'm silly enough to "make believe" that the rooms we still use, are the only rooms in our dwelling. And if that were so, we'd live in a cottage. I therefore can live in a cottage, in my imagination.

Your writing is always so delightful and smart. I don't know if you have noticed that I am following your blog some days ago. I find it a great pleasure. It is full of spirituality, sensitivity and lucidity. Inspiring and motivating! I also have my blog, where I invite you to pop out whenever you feel like it. It is written in Spanish (though my friends and kindred spirits can read English) and it is a new one (I moved down some days ago, like you are planning to do to A Hopeless Romantic ;) I just needed some new place where to keep growing and exploring). Anyway, if you visit us, I will be particularly honored and cheerful.

Best regards from my little cozy house in the Mediterranean!