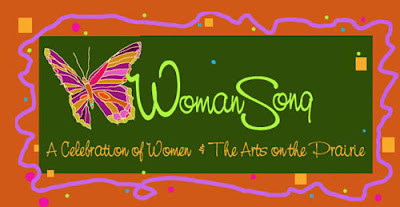 I'm very excited to have received confirmation of my registration and classes for the Dakota Woman Song retreat being held in September. It's billed as "A Celebration of Women & The Arts on the Prairie."

I'm signed up for two classes - one on creating a spirit doll, and one on goddesses. There'll also be speakers on women's topics, musicians featuring Celtic, folk and other types of music, vendors, artist demonstrations, a theatre/dance troupe, food, an open stage, and a bonfire to cap it all off. (And I'm staying only one night!)

Even though it's been taking place for few years now, I only learned of it last fall, too late to make plans. I had never even heard of Grand Rapids, ND, the small town in which it is held.

The only sad note is that I couldn't get any of my book club friends to go with me. They don't seem to be as excited about this retreat concept as I am. Dakota Woman Song seems to be right up my alley regarding "where I'm at" in my life right now. (That sounds very 60s, but I was a child of the 60s, so I can say it.)

There will be advantages to going alone, one being that while on outings my book club members (including myself) seem to act like a bunch of baby ducklings trying to wander off every which way while one member (our "Mother Hen") tries to round us all up.

What's ironic is that I know almost any of my blogging friends would be up for such a retreat if they lived nearby. As Mari-Nanci says, "Sigh."
Posted by Julie at 9:32 PM

Youare absolutely right, I'd go with you if I lived near enough. It sounds both interesting and fun. Those of us who can't get there will have to rely on a detailed report from you instead:)rfiswdw

This sounds fantastic! Well done you! And you will not only get some 'me' time but also have the opportunity of making new friends.
Can't wait to hear how you get on.

Sounds like a grand time to be had. Enjoy yourself.

Oh, I would love to be there! I'm afraid I've used up my quota of travelling for the year, though! And you won't be by yourself, will you? You will be with a lot of kindred spirits who have been drawn to this retreat too. Wonderful! Enjoy!

How wonderful that you will be going to the Dakota Woman Song retreat, I'm all excited for you:-) It's a shame none of your friends want to go with you but sometimes it's better when you can go alone!! xox

hope you have a wonderful time. xx

Good for you to forge ahead on your own. You will come back with such great stories, not to mention pretty things, that they will be smarter about going next year. Have a great time. I look forward to seeing all the goodies and reading of your adventures.

Great that you got confirmation of your registration!

And post away all you want about dear Gladys Taber! Heavens, we who have enjoyed her, love to see others who do the same. And the more we tell of her, the more people we may bring to reading her and loving her.

I would definitely have joined you, it sounds simply wonderful. I will be anxious to hear all about it and I hope it's all you anticipate and more. We'll be with you in spirit for sure!!
XOXOX

Yes...this is right up my alley too! Love these type of things Going by yourself is probably better....you can wander here and there without worrying about what your friends want to do.

Wish we lived closer :O). . .sometimes it is good to be on your own to soak up everything. This sounds like a wonderful experience coming soon.
Will look forward to hearing about new insights and memories.

The retreat sounds wonderful. I attended one this past June and it was so wonderful, I wish for you the same kind of experience.

Believe me if I could I would go with you, I would love to be part of those workshops and get to give you a big huge bear hug.
P.S. I can make you one of my sweet joyful dolls if you wish, say yes please!

I have been on one retreat and I came back a changed person! How exciting this one that you have planned!! The new spirits that you will connect with!!
you go girl!! hugs NG