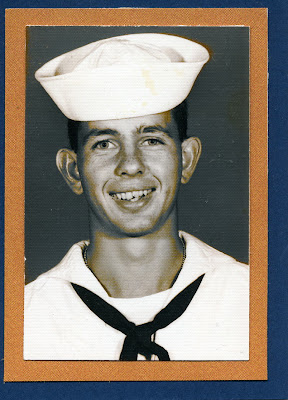 Today, Veterans’ Day, I salute my favorite veteran, my husband, Dan. With an offer to train as a medical corpsman, young Danny Fredericksen, from Williston, ND, age 18, joined the Navy to see the world. He never set foot on a ship; instead, he saw Vietnam.

Dan’s theory as to why he was sent to Vietnam is that he pissed off the head nurse at the Naval Hospital at Oceanside, California. Very shortly thereafter, instead of having a safe stateside job, he found himself, at age 19, in the jungle. Instead of a white sailor suit and hat, or dress Navy blues, he wore a helmet and flak jacket.

Dan – known to his comrades as “Doc Fred”, was in Vietnam from September of 1967 until September of 1968. That parallels my freshman year in college and the beginning of my sophomore year. While I was swanning my way through the University of North Dakota, he was living the hell that is war. Dan recalls that the only time – the ONLY time – he ever saw his Dad cry was the day that Dan went to Vietnam.

I did not know Dan while he was in Vietnam. I met him in 1970. Most of our first dates that late fall/early winter were held at The Highlander bar in Grand Forks, with its tartan-covered walls and blue-collar-neighborhood feel. During those dates, those tartan-covered walls and I absorbed Dan’s stories. I listened and he talked: about how he pulled dozens of leeches off his body after wading through rice paddies, about how he and his buddies, stoned, sat atop buildings back at the rear and watched flares light up the sky. About how terrible the Medevac choppers smelled while carrying the body bags. About how his best friend died in his arms.
(Below) A very different Dan from the one above. This badly-scratched photo is the only one from Dan's Vietnam days that we were able to salvage from our house fire. 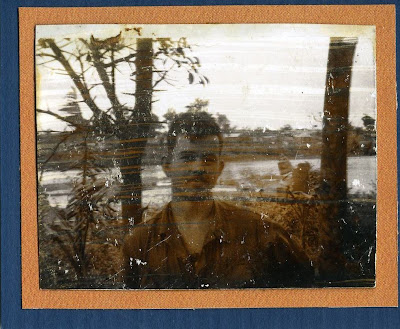 I learned the smaller, more personal things of war as well: That Louisiana Hot Sauce makes C-Rats (C-rations) somewhat more palatable. I learned that the sun goes down abruptly in Vietnam, with no sunset. I learned about short-timers’ calendars. I learned that Marines don’t wear underwear in the bush. When you get an attack of dysentery, it’s faster to get your pants down that way.

I listened, and I learned, and I saw. I saw how malaria racked Dan’s body with sweats and fevers for years afterward, and how tiny bits of shrapnel kept working their way out of his body. I see that Dan can barely tolerate hearing a helicopter pass overhead. And I know that it is true, what a blogging friend’s husband told me: that all Vietnam vets, whether they display overt symptoms or not, have post traumatic stress disorder.
(Below) The telegram Dan's parents received when he was wounded in action. 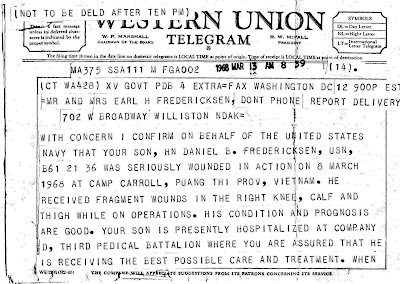 Thank you Dan, for serving your country, at a time when vets were reviled and spat upon when they returned home, not feted with parties and parades. Thank you for patching up your buddies and saving their lives. Thank you for enduring the serious wound you received.

We owe you and other veterans so much, no matter which war you served in – a righteous war or an unnecessary war, a declared war or a police action, a war that ended suddenly with surrender and armistice, or with retreat – it matters not.

(Below) Dan was interviewed by the local paper after returning home. About the situation in Vietnam, he said "We're just not accomplishing anything worthwhile. There's too much politics in the war and we should either go all the way or get out". 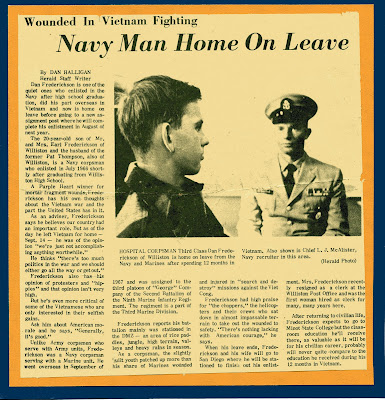 I am so glad that your husband, Dan, returned from that war alive. I would've been one of the 'hippies' he didn't care for, I was against that war but never against the soldiers. Some of my closest friends were drafted, a couple made it back... we lost too many.
Dan, Thank You.

Oh Julie, Dan's story just broke my heart...I can't even imagine the horror that he and the others went through while fighting in Vietnam. And that telegram his parents received...how worried they must have been about him. You have a very brave man as a husband and saying thank you doesn't even begin to justify what they did for us. We will never forget our heroes of yesterday, today and tomorrow. xoxo

This is such a loving tribute to your Dan. Please tell him "thank you" from me,.too I didn't have any loved ones who served in Vietnam but knew people afterwards who did. I think that blogger was right....they all have post traumatic stress disorder to some degree. How could you not?

This is a lovely tribute to your husband, Vietnam wasn't a war that we were involved in but I know the horror that existed there for the men who fought. There are so many apparently ordinary men with extraordinary pasts.

That is a wonderful tribute. Please thank your husband for me. Our soldiers are so young. My oldest son will be in the Army ROTC next year when he starts college.

From another Celtic Kindred Spirit,
P.

Wonderful entry! Ahh yes, a good Net friend of mine, was in the Nam war.

It is heartbreaking, how they were treated when they came home. And how they had to deal with this... Hug and thank your Dan, for me. :-))))

And btw, what terrorizes my friend now, is that the present generation of military, will come to be reviled, in a similar way, when they return. That really terrorizes a lot of Nam vets...

Especially when certain well known old vets call our present day warriors, by the names of killers and rapists. And those who called their generation, the same. If you 'get my drift.' Grrrrrrrr...

As the daughter in law of a WWII veteran and the daughter and friend of Viet Nam veterans, I can't talk about this subject in one liners, or keep it short. I will tell you, that I know that Viet Nam veterans need the support of those with a common experience to continue healing, such as it is. It all, never really goes away. I know that many Viet Nam veterans PTS symptoms have been triggered again by the events of Sept. 11th and this current war. My feelings are that the best way to truly honor all of our veterans is to continue to work for the cause of peace, while supporting veterans organizations that make a difference.

I salute you Dan!
All of my respects!
and thanks to you for sure!
Very proud and happy to be a friend of your wife and yours, too!

Thanks for the lovely story about Dan. And thanks, too, for the salute to all veterans. I never saw battle while I served in the Air Force, but I'm always proud to know that I was part of something that means so much to so many.

Tell your husband Thank You for his service, please. He sounds very brave and honorable and I am privileged to have read this small part of his story.
Kari

Hi Julie
My ex spent time in Vietnam too. Thankfully he was never hurt, but I know he saw some of the horrors of that terrible war. He still doesn't talk about it very much. I salute your Dan and all the brave men and women who have served and continue to serve our country.

I don't blame his dad for the tears. They are certainly called for!
Thank-you for sharing this we must not forget our vets!

I lost some friends and family in VietNam. Happy your Dan came home...he especially will never forget...Sending love and thanks to you both.
xx

Lovely tribute to your husband and all of these brave souls.

I salute Dan and all the other war veterans... I am amazed by the Vietnam Vets... we have many here and the hell they went through.
He is a true hero xoxo

I was so moved by this post Julie. All veterans have my greatest gratitude and respect.
Their experiences will stay with them forever.
xo