THE MAGIC OF ORDINARY DAYS 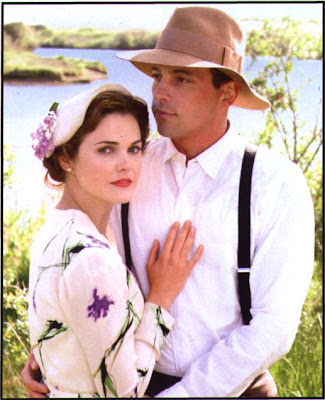 I am the hostess for the April book to be read by the CRS Book Club. I chose "The Magic of Ordinary Days," by Ann Howard Creel. I saw the Hallmark Hall of Fame movie first, and was so impressed that I ordered the book. You may be thinking, "Ewww", a Hallmark movie. But it was excellent. It was neither saccharine or treacly, due in large part to the sensitive performances by Keri Russell and Skeet Ulrich.
I am always impressed by the luminous Russell. In "Magic" she plays Livvy, a scholarly preacher's daughter and city girl who becomes pregant by a World War II soldier. When the soldier dumps her, her father arranges a marriage for her with a shy bachelor farmer, played by Ulrich. The characters do fall in love, but the development of their love is realistic. When I think of Ray, I think of the old fairy tale, "The Steadfast Tin Soldier". His love for Livvy is immediate, innate, steadfast and true. In contrast, Livvy's feelings for Ray grow slowly with the development of the seasons.
The performances by the two main characters, and Mare Winningham, as Ulrich's sister, are as strong and solid as the Colorado plains in which this story is set, as unassuming - yet as impressive in its own subtle way - as the prairie.
In praising the movie, I am primarily praising the book, for the movie has been adapted very closely from the book. Set in the 1940s, it captures the era very well, especially with the vintage clothing and autos. There is an interesting side story in which Livvy makes friends with two women from a nearby Japanese internment camp.
Not only do we learn how Livvy learns to live with a stranger, but how she comes to love the land and the people around her. She learns she does not have to give up her beloved books, and she even uses her archaeological training to explore the area, kindling an appreciation in Ray for his forefathers. Livvy may have been forced to give up her dreams of excavating treasures in foreign lands, but in return she finds equally rich treasures.
Posted by Julie at 7:04 PM

I loved this movie so much, mostly because of Keri Russell, she is just so believable. I wish there were other actresses as good as she is.

I, too, fell in love with the movie first, then the book. It is one of the most touching, tender, believable love stories ever.

Keri Russell, Skeet Ulrich and the entire cast literally breathed life into their characters. It is truly one of the best movies I've ever seen.

Nice to read your comments about it!