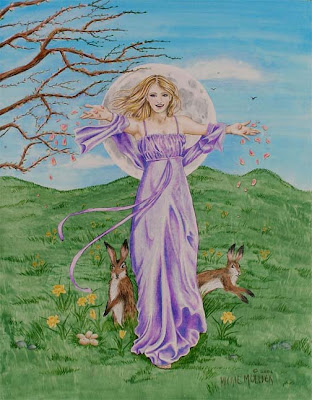 THE GODDESS EOSTRE AND SPRING HARES -
SYMBOLS OF THE VERNAL EQUINOX
*********
I never knew that tomorrow was such an important day! I've always known about the vernal - or spring - equinox, when days and nights are of equal length. But I didn't know about the sacredness of the vernal equinox until I started exploring the Celtic World.
I discovered that the vernal equinox was a holy time of transition for the Ancient Celts, who called it Alban Eiler, Light of the Earth - or Alban Eilir to the Druids. This rare balance in nature made these days a powerful time for the Magic of the Ancient Druids.
It's a time of renewal and new growth, when the natural world is re-born. On this day when the earth tilts on its axis away from winter, the God of Light conquers the God of Darkness.
But the Celts weren't the only ones who held this day in reverence. It was celebrated long before them, by the Megalithic people who lived in Britain before the Celts, the Romans and the Saxons. Ancient Greeks, Ancient Romans, Ancient Mayans all celebrated the equinox, as did Native Americans. Ancient Persians called it NawRaz, their New Year's Day. The Ancient Germans called it Ostara, after the Germanic fertility goddess.
To the Ancient Saxons this day was called Eostre. You can see that the word closely resembles the word Easter, a Christian holiday that became extremely intertwined with the pagan spring celebrations. The Legend of Eostre tells how this goddess found an injured bird. To save its life, she transformed it into a hare. But the transformation was not a complete one. The bird took the appearance of a hare, but retained the ability to lay eggs. The hare would lay these eggs and leave them as gifts for Eostre.
Other names for the vernal equinox are White Spring and Bird Festival. For some, it is the Feast of the Annunciation of the Blessed Virgin Mary. "The old and accepted folk name for the vernal equinox was Lady Day," writes Mike Nichols at geocities.com. However, Wiccans have appropriated this name for their celebrations of the equinox. "Christians sometimes insist that the title is in honor of Mary and her Annunciation," says Nichols, "But Pagans smile knowingly." 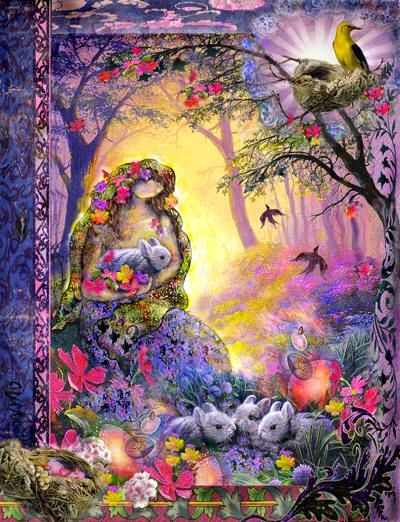 ﻿
I must emphasize that I am a Christian, not witch, Wiccan or Pagan. However, I see no harm in observing some of the rituals associated with the equinox. Egg decorating, egg rolling and egg gathering are three such rituals, but to me those are best left to Easter.

It is said that on the spring equinox, the sun dances with the water at sunrise. Neopagans gather at lakes or ponds at dawn to see this occurrence in warmer climes, but that's not very fun to do in North Dakota in March! Some things that a Northerner could do would be to tie colored ribbons or strips of fabric to a tree chosen to represent the Tree of Life, plant a pot of grass seed, buy spring-flowering plants, force lilac or forsythia branches indoors. Every culture that celebrated the equinox considered it a time for feasting, and I celebrate that!

Here, the trees and flowers have no buds, the grasses are not green, the birds are not yet laying their eggs. It's too early for riotous spring festivals. But we can observe the equinox in quiet ways too. Since this is the day when daylight and dark are equally balanced, we can use this day to examine the balance or lack thereof in our own lives. We can spring houseclean, either literally, by de-cluttering, or figuratively, by cleaning our psyches. It is a day to seek equilibrium, to re-balance our energies. It's a time for new hope, new beginnings, new relationships, a time to make life changes if we so desire. For me, it is enough to see if I can find some pussy willows to bring home tomorrow.

For an "Alban Eiler" greeting, go to http://dobhran.com/greeting/GRspring.htm. It will be accompanied by the MIDI version of "The Mummer's Dance," by Loreena McKennitt.(Featured in her CD, "The Book of Secrets.") It is fitting that McKennett's music accompanies this greeting, because she is a student of all things Celtic. However, DO NOT forward this greeting to anyone, as you will be put on mailing lists and bombarded with emails from this site if you do.
Posted by Julie at 7:11 PM

What a good article you write!
I always wondered what a rabbit was doing with eggs!