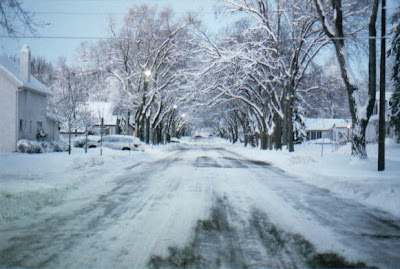 In looking for photos for my posts about winter, I found this one. After taking a good look at it, to my surprise I recognized the scene as being my corner! If you would turn right precisely here, and go one-half block North, you would be at my house!
Up until a year ago, I would have turned left, driven eight blocks and arrived at the parking ramp downtown, just a block from work. Now, I turn right and go eight MILES to work, usually feeling as bleak and blighted as a winter morn. (What fate will befall me today?)
I'm not not sure why the KFYR-TV photographer took this photo, unless it was to illustrate the frost on the trees, but at this time of the morning (street lights are still on), the sun wouldn't have caught the effect very well.
Five or ten minutes before I get in the car and reach this corner, I'm scraping frost and/or snow off my car, since I don't park it in the garage. I once read a not-very-good book (and even worse movie starring Julia Ormond) called "Smilla's Sense of Snow." In the book, Smilla can distinguish between different types of ice and snow, in the way that Eskimos are reputed to have hundreds of names for snow (I have read that this is a myth.) This sense serves Smilla well - I think I can remember her jumping across ice floes in an attempt to get to shore during her travails in trying to solve a mystery.
Anyway, I do believe that I have a sense of frost the minute I see it on my car. There's the kind that is heavy and thick (uff da, I'm thinking), but it comes off the scraper as easily as shaving cream comes off a razor. There's the kind that looks like Jack Frost has been at work. That type is pretty but surprisingly hard to scrape off. It looks innocuous, but isn't. It needs "elbow grease."
Then there's the kind that a scraper hardly puts a dent in. It takes 15 minutes of hard, hard scraping and a sore arm - or two - before this type of frost is conquered. Then there's just plain ice. One is tempted to use the edge of the scraper like an ice pick, but that's just futile. Nothing to do with this kind of "frost" but let the defroster melt it.
Then you have different levels of scraping. Some people, like my husband, clear themselves a little area on the windshield and call it good. They're the happy-go-lucky kind who only look forward in life. Some people clear the windshield entirely, the left and right front windows and a patch in the rear window. They're optimists. Others, like me (pessimists), clean the entire surface of all windows.
Like the Eskimos, I could give my different kinds of frost names, but I think they would end up all being of the %x#@* variety. I wonder if I can write a mystery based around "Julie's Sense of Frost."
(P.S. I PLAN for this to be the last post about winter this year.)
Posted by Julie at 6:42 PM