AND THE LION LAY DOWN WITH THE LAMB 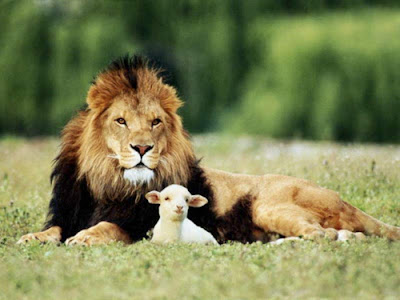 In Dakota Country, March came in roaring in like a pissed-off lion, riding in on the chariot of the gladiator he ate. (Translation: the lion was a nasty storm that dumped a foot and a half of snow in the eastern part of the state.) But in Bismarck the storm was tempered by a little bit of woolly soft weather. Although we, too, were supposed to get the brunt of the storm, we only got 4.5 inches. Plus, the temperature wasn't too cold and the wind wasn't whistling too sharply around the corners. So in Bismarck, the lion might have looked as content as the one in the picture above, with nary a thought about lunching on lamb.
The only problem is that the storm will probably "turn back west" and attack our flanks. When has a Dakota storm ever turned back west? We haven't heard the last of the lion's roar, I'm afraid. 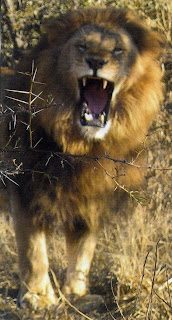 I, myself, came into March like a pissed-off, cranky, boorish, thorn-in-the foot lion. It was one of those days that my skin felt like it was stretched too tight, my eyes wanted to go crossed, my hair decided to grow sideways. A tight band was wound around my forehead. Even my teeth hurt.
I wasn't ill, couldn't call in sick. It wasn't the weather. I've dealt with worse before. It wasn't the job. Ditto on dealing.
Maybe my blood pressure was too high. Maybe my blood sugar was too low. Maybe the ion balance in the air was wrong.
Pure and simple, it was just one of those days when I wasn't in sync with my body. If I were a lion the burrs would be sticking in my coat, the wild game would be scarce and the flies would be buzzing around my head. Not to mention that pesky thorn.
In short, I was cross. Don't you love that word? "I'm cross, so don't cross me." Don't you wish that on those days, you could just let off a few well-timed roars? Just let it out in a primal scream.
Those are the kind of days that you want to tell the people that annoy you: "Hey, I've got one nerve left and you're getting on it." Better, yet, let's throw those annoying people to the lions and tell the lions "Bon Appetit."
"My damn paw hurts and somebody better come take this this thorn out of it," says the lion. The human says, feed me some soup, give me a hug, tell me how great I am. Better yet, just go away and let me take a nap. Tomorrow will be better, and it's just 45 days until spring by the Julie-n calendar.

Comment added Friday, March 2: Worse sh--, different day. Dakota storms do turn back west. The Bismarck lion ate the lamb. There's not one woolly curl left. This day gives new meaning to the phrases "ground drifting" and "almost wet my pants"due to near accident.
Posted by Julie at 7:50 PM