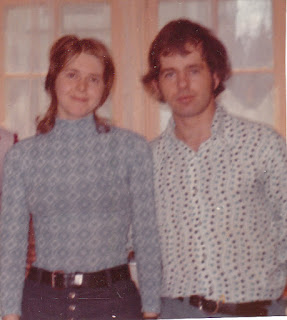 Don't we look terribly young and innocent?
(And what was I thinking with
that long shag haircut?)

I've been spending the past week in a fantasy land, but I'm back to real life today, on the occasion of Dan's and my 38th anniversary.
I've been listening a lot to Daughtry's song, "Life After You", because of its beautiful melody, but recently I've been paying attention to one special part of it. Most of the song is about a guy regretting that he ever walked out on his girl, and Dan never walked out on me, but I do think that the following verse speaks about our marriage:
"All that I'm after is a life full of laughter
As long as I'm laughin' with you
I'm thinkin' that all that still matters is love ever after
After the life we've been through
'Cause I know there's no life after you."
The line that strikes me most is "After the life ﻿we've been through." What haven't we been through in the past 38 years? Here's a partial list:
All four parents dying.
My brother being killed in a car accident.
Multiple career changes, some not by choice.
Between us, the loss of four jobs.
Almost constant financial hardship.
Three  miscarriages and one stillborn son.
Our daughter being hit by a car.
Dan having a heart attack.
Our daughter nearly dying of a serious disease.
Our home burning down.
Dan being diagnosed with colon cancer in 2011 (it eventually
turned out that the polyp was pre-cancerous. Whew!)
I could go on and on, but I find it too depressing.
Thirty years ago, I took a mental stress test that scored us off the top of the charts, and that, as I say, was a long time ago, with plenty of grief yet to come. Stressors tested were not limited only to negative events, so even the wonderful things in our lives, like the birth of our daughter and the purchase of a new home, added to our stress levels.
And then last December came the worst blow of all. Dan was told he had cancer again - not a pre-cancerous polyp this time, but a full-blown, Stage IV cancer of the esophagus. So began the bleak winter of 2011-2012, with 6 trips to Fargo for chemo treatments followed by truly wretched symptoms that only began to let up just before the next treatment was due. He lost weight, he lost his hair, he lost his physical strength. He didn't lose his will power, though.
Finally, he was told that his tumor was shrinking and the lymph node involvement was receding. And then in April, just before his sixth treatment, came the best news, that he was in remission.
So now we are putting our faith in a long remission, and enjoying our summer. Dan has gained some weight and strength back, his appetite is slowly recovering, and his mustache, if not his hair, is starting to grow. He may take several days to mow all the lawn, but it gets mown. He went golfing once and really enjoyed a four-day fishing trip.
When I was a reporter at the Bismarck Tribune, part of my job (my least favorite) was to be the Hometown Editor. We did not publish free wedding anniversary stories until the 40th, which miffed a lot of people, but I understood the reasoning completely. We would have had to publish a gazillion 25th anniversary stories, not so many 40th, and fewer and fewer for each major milestone passed.
But now, I feel that MY 38th anniversary should be celebrated with rockets' red glare and bombs bursting in air. This is going to be one of those significant anniversaries, milestone number or not. Thirty-eight years of love and laughter with this man. (More, actually, since I met him in 1970.) Amazing.
I truly know that "All that still matters is love ever after/After the life we've been through/"Cause I know there's no life after you."
Posted by Julie at 10:07 AM

how lovely! Enjoy your anniversary with your special man, you have come a long way and deserve every happiness.
Hears to many more years together.

Life is a journey and when you set down and recall all the events that made you happy, worry, cry and laugh, it gives us reason to wonder how we do endure. Arney and I are having our 48 this summer, so many things to recall and be grateful that we had each other to hold onto. Happy Anniversary! I love this adorable picture...you are so sweet together. And the hair was in style at the time...I hear the shag cut is coming back. Love you, Mary

How handsome. How pretty. And. HOW thin we all were back in the day. Happy anniversary, Julie.

I'm so happy that you and Dan are celebrating yet another great anniversary - congratulations dear and may you always enjoy each year together more and more.

Glad to know Dan is continuing to regain his health and manages to do things around the house - that's always good! Bob still mows for us despite the cancer - which now is 10 years behind him - where on earth did that time go!

We just arrived home from Africa, had a fabulous time - will be posting once I get myself organized!

Enjoy your anniversary - sending love to you both.
Mary

Happy Anniversary, and I wish you many, many more. I always remember the lines, though not where they came from: Abide with me the best is yet to come

Your summary of a life together is so life affirming, it brought tears to my eyes.

Hope your anniversary was wonderful. I think of you often Julie, with LOVE.