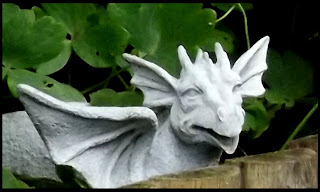 Hi, does anyone know where I can find this little cement (I think) dragon? I'd prefer a U.S. source, but would even order from a shop in the U.K. or Canada. I have become enamored of him and would like his brother to come live with me.
It is just nine days now until my Fairy Day/Birthday Eve "Gathering of Enchanted Souls" party. However, I have received only two RSVPs!! Sniff! I am feeling very unloved.
I know part of the reason is that I've been very remiss in corresponding with my blog friends lately, and they may not be reading me anymore. But you can be my guest even if you have just stumbled onto my blog after Googling Celtic, fairy, pixie, mermaid, selkie, dragon, goddess or other enchanted creature.
All you have to do is e-mail me a picture of how you will be appearing at my party. It can be a picture you found in a magazine or on the Internet, or even a photo of your dressed-up self. My two respondents so far will be appearing as fairies. Both also sent poems, but that is not a requirement. But it would be fun to have a sentence or two telling me about your enchanted self. My e-mail address is scottishlassnd@yahoo.com
Please don't make me cancel my party. Be fey, be whimsical. Let your freak flag fly and just go for it!! 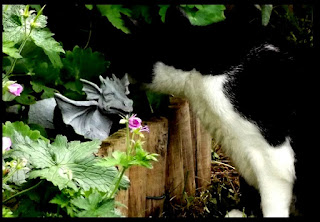 The photos in this post are by Leanne from "Tales of Simple Days"  (on my sidebar) and used by her permission. It seems as if one of her six lovely kitties is having a conversation with the baby dragon. How fitting that this handsome boy is called Merlin. What cat would be more likely to converse with a dragon than one named Merlin! 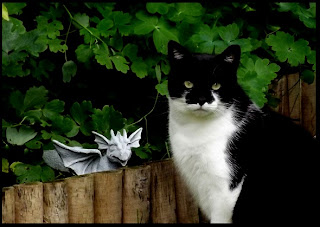 The little guy thinks his joke is funny but Merlin does not appear amused!
Posted by Julie at 3:10 PM

Julie- I cannot remember where I bought my little dragon from- I have had him a good while. ive spent a good while online today trying to track one down. Ive found one place who will post overseas but he is out of stock at the moment. however it may be worth you emailing them to see if they expect to get some more in?

I can see why you like the dragon, he is much nicer than most that I've seen around - I love the photos of Merlin and the dragon:) Hope you are successful in your quest.

Have you tried dragging one of your photos of him into google image search?
I actually JUST finished the watercolor I prepared for your party :) I'll be emailing a scan soon :)