A DAY OF FIRSTS 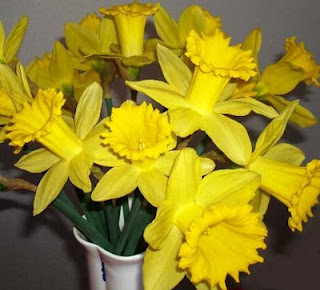 The more northern Native Americans knew it as the Crow Moon, when the cawing of crows signals the end of winter, or the Crust Moon because the snow cover becomes crusted from thawing by day and freezing at night. The Sap or Maple Sugar Moon, marking the time of tapping maple trees, is another variation. 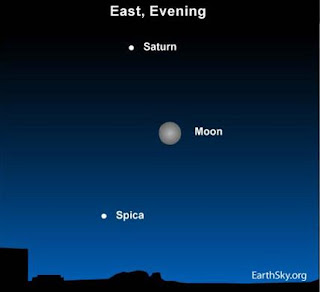 The moon turns precisely full tonight at 9:35 p.m. in my time zone, Central Daylight Time. If it stays clear outside, it will beam between the golden planet Saturn and sparkling blue-white Spica, the brightest star in the constellation Virgo the Maiden.

In the northern hemisphere, the first full moon of spring always takes place in front of the constellation Virgo. Moreover, Virgo is first seen at nightfall in early spring. It will continue to come out as darkness falls all through spring and summer. However, by the time the leaves turn color and start to fall, Virgo will disappear from the evening sky – not to appear at nightfall again until the following spring. No wonder people in the northern hemisphere associate Virgo with the goddess of fruitfulness!

You probably will not see much of Virgo except for Spica. However, the early Greek stargazers saw these stars as Demeter, their goddess of fruitfulness. It was said that the god of the underworld, Hades, fell in love with Demeter’s daughter, Persephone. But Demeter didn’t approve and refused to allow them to marry. Eventually, Hades’ passions got the best of him. He swept Persephone away in his black chariot and took her to the underworld to live.

Demeter is said to have roamed the Earth searching for her daughter, neglecting her duties as Earth goddess. Seeds didn’t sprout, trees didn’t bear fruit, and a famine hung over the land. Finally, the king of the gods, Zeus, forced Hades to let Persephone go. Zeus had warned Persephone not to eat anything while in the underworld, but she, overcome with hunger, had eaten six pomegranate seeds. As a result, she could not return to her mother permanently. She would have to spend six months with her husband and then six months with her mother each year.

According to the legend, when Persephone is spending her six months in the underworld, Demeter grieves and we have fall and winter. Then when Persephone comes back to Mount Olympus, spring arrives! 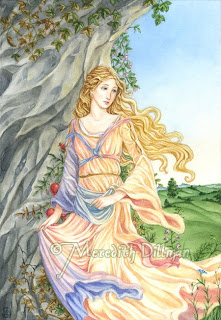 "PERSEPHONE" by Meredith Dillman
By the next full moon, on April 28, we in North Dakota will have experienced many more "firsts" of spring. We will have had green grass and dandelions. We will have heard meadow larks. The leaves will have unfurled. Perhaps the earliest of the flowering trees, the almonds, will be in bloom. By the full moon on May 27, we will have had apple blossoms and maybe even lilacs. People will be setting out their bedding plants and finalizing plans for Memorial Day.


But for now, what we have of spring is more than sufficient unto the day.
Posted by Julie at 5:14 PM

Glad you had such a great day! I think it was a bit warmer where you are than down here...but we are to have a warm week.
I love how you observed and noted the firsts of spring, and thank for reminding me about the full moon tonight!

We haven't hit a 70 degree yet, but I think one is forecast one day this week. We shall see. We're still getting an occasional upper 20's in the nights, and it is cold in the mornings still too. I know you needed this weather, Julie. It sounds just the ticket for clearing cobwebs.

Lol Julie- you finally get some springtime.... and we in the UK return to winter! Glad you have some sunshine finally, hope ours returns soon too!!

So glad you treated yourself to the daffodils. Flowers are good for our spirits.Sounds like a lovely day.
Hope you have a long stream of days like this.

Great to see that you have a few notions of spring - we have daffodils, snowdrops and crocus but also gale force winds, rain, sleet and in some parts snow and lots of it. Enjoy and revel in it.

Julie, what an auspicious day of 'firsts', you must have been gathering those lovelies and holding them close to your heart after the long, cold Winter.

We have been in the high 80's most of the week, really far too hot this early. My shoulders were sunburned (naughty me forgot sunscreen) on Friday when I spent the day gardening in a tank top (the only place I'll wear one at this age - other than at the beach!). I've been planting the side bed where the enormous split oak was recently taken down....no easy job because despite stump grinding there are still huge roots to contend with! Oh my garden how I've loved you, and how hard you are becoming to care for now that the once limber back muscles are screaming!!

The moon was beautiful last night, peeking through the new leaves of the trees.

Thanks for your thoughts (and your always welcome wonderful comments) on Blogger in Draft etc. Isn't it weird that one can't spellcheck? Do you know how to get rid of B in D Julie? I can't disable it. I still haven't mastered placing my pics - I don't seem to be able to move them once they've posted so have to delete and try again. Can't say this is the easiest program and can't find much help from Blogger. I do love the big pic format for showing details.

So dear friend, hope this Easter Day is full of blessings for you, Dan and your entire family. Enjoy the raspberry eggs!!

HAPPY EASTER!~Just taking some time to catch up on a few blogs that I love to follow....
"HOP" on over to win an antique sterling silver vase on my blog! Drawinig not till Wed....
www.cumberlandislandquiltchick.com

Wonderful day. Daffodils would brighten any day of mine. I absolutely love them.

Beautiful Daffodils(:)
your blog looks beautiful..
Am just strolling around blogland today ..
been awhile and am trying to catch up~ hugs,Patty

I came by to see if you had a new, always fabulous, post, and noticed the April pic on you sidebar Julie. That wisteria by the bridge is so pretty - do you mind if I borrow it please?

Hope it's warming up there and you are able to ditch that Winter coat at long last! Perfect here now - true Spring, everywhere is beautifully in bloom. The pollen choked us last week - it came all at once and was the worst ever - so this week I'm busy cleaning outside, gazebo, deck, porch.

We are still cold, It was about 50 today. I have been busy away from blogging for a few days. I am working on my family tree. It has taken alot of my time, but I love what I have found.
I love this post. Have a wonderful April, Hugs Mary

Julie, What lovely flowers..
Happy Spring to you!
Blessings ~Mary~ :-}