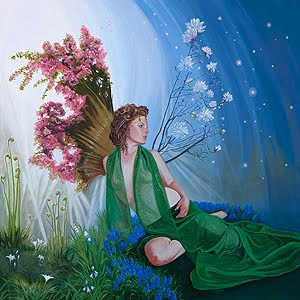 "SPRING, VERNAL EQUINOX" by Christina DeHoff
Today, March 20, is known as the day of the Vernal Equinox in the Western World. The vernal, or spring, equinox arrives this afternoon precisely at 12:32 p.m. in my time zone, CDT. But long ago, it was known by other names. One of those names was Alban Eiler, the Celtic name for the time when day and night are equal in length.
Alban Eiler, a Druidic name for the festival celebrated at this time, means "Light of the Earth". This rare balance in nature made this day a powerful time of magic for the ancient Druids. From this day forward the forces of light wax and the forces of darkness wane, but on this day they are equally balanced, poised on the razor’s edge. Alban Eiler is a between time, one of the eight portals of the seasons, during which we may more easily move from this world into the realms of Faerie. 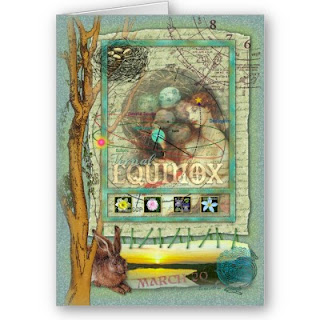 Vernal Equinox card by Ernestine Grindal
(greetingcarduniverse.com)
The Vernal Equinox was celebrated long before the Celts, by the Megalithic people who lived in Britain before the Celts, the Romans and the Saxons. Ancient Greeks, Ancient Romans, Ancient Mayans all celebrated the equinox, as did Native Americans. Ancient Persians called it NawRaz, their New Year's Day.
A cluster of megalithic cairns from ancient times are scattered through the hills at Loughcrew, about 55 miles northwest of Dublin, Ireland. Loughcrew Cairn T is a passage tomb which is designed so that the light from the rising sun on the spring and summer equinoxes penetrates a long corridor and illuminates a backstone, which is decorated with astronomical symbols.

The following is a link to the sun's path across the backstone of Loughcrew Cairn T at the vernal equinox: http://www.religioustolerance.org/spequi2.htm. (Scroll down to the U Tube video.) 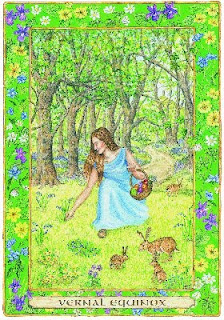 "VERNAL EQUINOX" by Anita Luckett
Spring officially begins on this day. Indeed, the earth does appear to glow with the burgeoning of new life. The tender green of new leaves in the sunlight creates a dazzlement like no other. Alban Eiler was associated with the "Rites of Spring," which had to do with the fertility of both plant and animal life.
The celebrations at the vernal equinox anticipated or celebrated the first plowing of the fields, which signified the land’s annual resurrection from the long, cold sleep of winter, inaugurating a new season of fertility. Homes, lanterns, hearths and children were all given a renewed blessing with earth. Crossing the forehead with soil as a symbol of one's connection with the earth was one way of enacting this.

Household animals were often led out to wooded hills to drink from freely flowing springs. This was done to cleanse and strengthen them, symbolically, for the summer’s work. As at all the equinoxes and solstices, rowan twigs were used in pagan Europe to make equal-armed crosses that—when placed over doors, on magical altars or over hearths—symbolized divine and psychic protection. 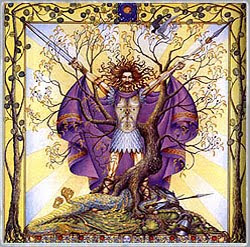 BRAN AND THE ALDER, Artist Uncredited
(Bran and the Alder tree are both
associated with the vernal equinox)
Alban Eiler was once thought of as presided over symbolically by the ancient deities Bran and Rhiannon. Bran was a Welsh Celtic king who always sought to bring enemies into peaceful accord with one another, and therefore may represent the balance implicit in the equinox. Bran is connected with ravens and was a god of prophecy. Known as “the blessed,” he was the brother of the Sea God (Manawydan ap Llyr in Wales; Manannán mac Lir in Ireland). He was “the Son of the Sun” and a god of music, writing and the arts. 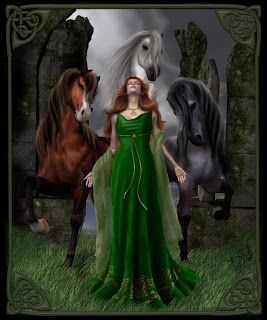 "RHIANNON", Artist Uncredited
Rhiannon was a Welsh mother goddess. She was connected with horses and birds, especially falcons and hawks. As the horse goddess, she may be the Welsh version of Epona, the horse goddess of ancient Britain. She was often seen riding a fast white horse, into which form she could shapeshift herself. She is the Mistress of the Gates of the Otherworld, Enchantment and Fertility. It’s this last role that links her to Alban Eiler. As the mother goddess connected with the vernal tides, she is thought to aid the new green vegetation, helping it to grow with her deep and craefty draíocht (i.e., magic). As a white mare she may be imagined as riding around plowed fields, chanting blessings over them to make the ground fertile. 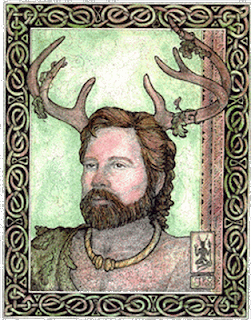 "THE HORNED GOD", Artist Uncredited
The re-awakening fertility of nature was long thought of in terms of Cernunnos, the horned god. Born at winter’s solstice, he is in his adolescence at Alban Eiler. Sometimes known as the Green God, Cernunnos will come into his own powers between now and Beltane (May 1). Connected with the revivification of green vegetation, Cernunnos may be imagined cavorting through the in the woods and playing around fields, dancing wittily, playing his pipes (pan pipes or the more traditional uilleann pipes) and singing to bring the goddess' powers to greater manifestation. 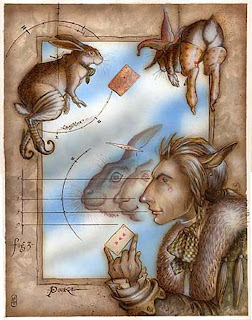 An Irish Pooka, Artist Uncredited
The pooka is one of the Old Irish spirits long connected with Alban Eiler. In its most ancient, mystical guise, the pooka was either a man transformed into rabbit form or else a rabbit transformed into the likeness of a man. The pooka has now been demonized in Christian mythology, but before that it was known as the consort of the Fair Lady of the Vernaltides; i.e., the boyish lover of the goddess. The pooka was a spirit servant who acted as a helper in bringing the powers of the vernaltides to presence in field, garden and wood. In some stories, the pooka acts as the boon companion spirit of the Irish Earth Goddess Tailtiu as the vernal equinox approaches.

The pooka is connected with rabbits, which are an old Celtic icon of the fertility of the land. Rabbits have been symbolic of the potency of life in many pagan traditions. To have a rabbit living near where you live is to be reminded, day by day, of the ancient goddess. It was said that if you fed rabbits near your door, the Triple Goddess would come and visit you over the course of the summer months. 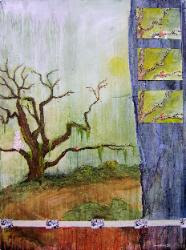 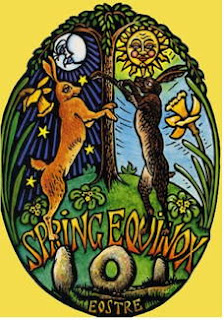 "SPRING EQUINOX", Artist Uncredited
GREETINGS TO THE SPRING EQUINOX
Glad Bringer of Brightness, hail!
Maiden of Grace, Lad of Laughter
Gifts of vigor are returning,
Spring's surprise, rainbow's embrace
Quickened be the heart within us,
Opened be our souls to grace,
May the blessing be abiding,
Welcome sit in every face.
Caitlin Matthews, "Celtic Devotional"
Posted by Julie at 9:57 AM

Once again - so much information - so much beauty. Thank you so much.

One of my favorite days of the year.
Many good wishes to you this day and always.
xx

blessings to you Julie, as we move into spring!

Gosh, Julie. As always, these selections of Celtic art are truly magnificent and magical. They always leave me in awe.

As always, I love the graphics!

thanks for all the good info. It is so interesting and a so much I didn't know!

I hope your area has stopped raining.

Lovely and interesting site. So nice of you to feature my image on your blog. Would you mind giving me name credit with a link back to my page (I guess Zazzle in this case) when using one of my copyrighted images?

Happy to! I went back and edited the post. I didn't find your Zazzle link so I added the greeting card link.