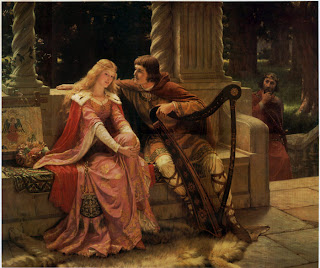 "TRISTAN AND ISOLDE" by Edmund Blair Leighton
Before there were Romeo and Juliet, before there were Lancelot and Guinevere, there was another pair of star-crossed lovers, Tristan and Isolde.
The tragic tale of the love between the Cornish knight Tristan and Irish princess Isolde has been told and retold retold by numerous writers with as many variations. Virtually all versions evolve around conflicting themes of romantic love for one person and loyalty to another.
The best-known version is the one by Sir Thomas Malory, who set the story in Arthurian times. Malory's treatment of the material is notable for its concentration on Tristan's chivalric behavior and feats of valor. 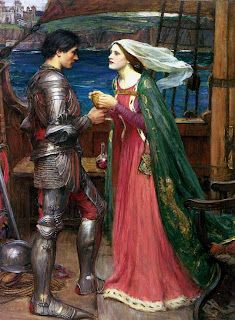 "TRISTAN AND ISOLDE WITH THE POTION"
by J. W. Waterhouse
The name Tristran was sometimes spelled as Tristan, and Isolde's name has many variations, including Isold, Isolt, Iseult, Yseult, Ysolde. I will use the spellings Tristan and Isolde. Here is one version of their story:
Isolde was the daughter of Angwish, King of Ireland. She was betrothed to King Mark of Cornwall. King Mark sent his nephew, Tristan, to Ireland to escort Isolde back to Cornwall.
Before Isolde left Ireland, her mother, fearing that Isolde might not love the much older Mark, gave Isolde's handmaiden a love potion, with strict instructions to keep it safe until they reached Cornwall. It was then to be given to Isolde on her wedding night. Sometime during the voyage, Isolde and Tristan drank the potion by accident and fell forever in love.

Isolde did marry Mark of Cornwall, but could not help but love Tristan. The love affair continued after the marriage. When King Mark finally learned of the affair, he forgave Isolde, but Tristan was banned from Cornwall. Tristan moved to King Arthur's court and later went to Brittany. 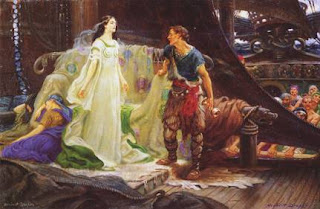 "TRISTAN AND ISEULT" by Herbert James Draper
There he met Iseult of Brittany (also known as Iseult of White Hands). He was attracted to her because of the similarity of her name to his true love. He married her, but did not consummate the marriage because of his love for Isolde.
After falling ill, Tristan sent for Isolde in hopes that she would be able to cure him. If she agreed to come, the returning ship's sails would be white, or the sails would be black if she did not agree. Iseult, seeing the white sails, lied to Tristan and told him that the sails were black. He died of grief before Isolde could reach him. Isolde died soon after of a broken heart. Iseult regretted her actions after she saw the love that the two had for each other.

The two were buried in Cornwall. From Isolde's grave a rose tree grew, and from Tristan's came a vine that wrapped itself around the tree. Every time the vine was cut, it grew again - a sign that the two lovers could not be parted in death. 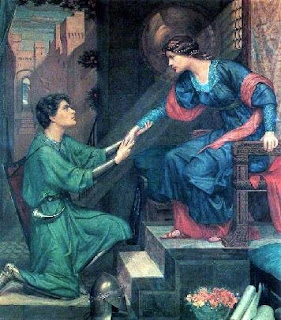 "TRISTAN AND ISOLDE" by Sidney Harold Meteyard
As with the Arthur-Lancelot-Guinevere love triangle, Tristan, King Mark, and Isolde all hold love for each other. Tristan honors, respects, and loves King Mark as his mentor and adopted father; Isolde is grateful that Mark is kind to her, which he is certainly not obliged to be; and Mark loves Tristan as his son and Iseult as a wife.

The story has Celtic roots. Tristan may have been based upon a real person, the Pictish prince named Drust, believed to have lived in the Highlands of Scotland in c. 780. By the time story had reached south into Wales, Drust had evolved to Drystan. The Welsh Drystan was clearly a fictional and romantic figure, compared with that of the historical Drust.

From Wales, the story found its way to Cornwall and then arrived in France, where it circulated in Celtic folklore in the northern region of France known as Brittany (that region also being a Celtic stronghold).  The legend was eventually set down in writing, including French romances by two poets in the 12th Century.
A hundred years later, the French "Tristan de Léonois" ("The Prose Tristan") appeared. Written by an unknown author, it provided the background for the writings of Malory, who completed "Le Morte d'Arthur" in 1470. Malory has Tristan appear as a full-fledged knight of the Round Table, for example, jousting with Sir Kay and (unknowingly) with Sir Lancelot, and saving King Arthur’s life. 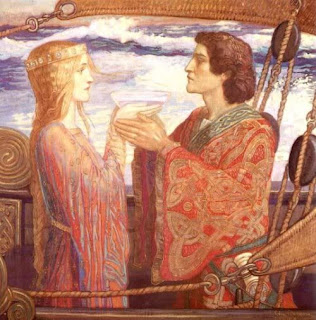 "TRISTAN AND ISOLDE" by John Duncan
Tristan and Isolde's conflict of love and loyalty is one of the classic tales of Western literature. Their tragic trajectory rivals and complements that of the later story of Lancelot and Guinevere, and likely influenced it.

The tale has had a substantial impact on Western art and literature since it first appeared. Matthew Arnold, John Masefield and Thomas Hardy have been among modern authors to retell the Tristan story. Painters, especially the Pre-Raphaelites, loved to portray the doomed lovers. Indeed, the tale of potion-induced passion has proved irrestible to artists in all media, including music. German composer Richard Wagner premiered his opera "Tristan und Isolde" in 1865. 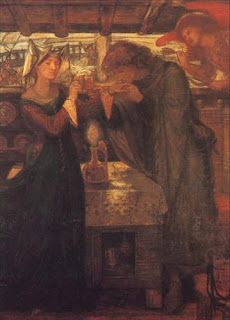 "TRISTAN AND ISOLDE DRINKING THE LOVE POTION"
by Dante Gabriel Rossetti
The tale of Tristan and Isolde continues to be told to this day. The movie "Tristan and Isolde" was released in 2006. As mentioned above, there are many variations to the legend. The movie has Tristan and Isolde meeting and falling in love in Ireland. After King Mark discovers their affair, he forgives them both, partially because they had fallen in love before Isolde ever married Mark. From there, events in the movie are markedly different from the version printed above. In my research I did not see any versions that the movie might have drawn upon, so what occurs in the movie may be a brand new version.

Knowing very little of the legend before I saw the movie, I enjoyed it very much. The scene of splendly-dressed Isolde arriving for her wedding on her torchlit Celtic barge is alone worth the price of admission. 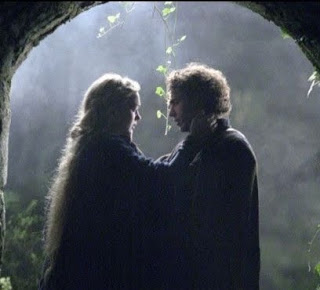 Scene from the movie "Tristan and Isolde"
with Sophia Myles and James Franco
Posted by Julie at 11:00 AM

What a wonderful story...I also love the pictures.I also read the post before this one and it was really good too. You always find the best things to share...
hugs, Mary

Tristan is my precious grandson.I'm partial to stories about him. Even liked the movie Legend of the Fall.
A very different story where Brad Pitt played Tristan.
:-)

Star crossed lovers, bah! (I am so not a romantic! LOLOL) But I have to say that the artwork is stunning, Julie! I love that you find such beautiful paintings to share!

I never heard of this story ~ where have I been?
I hope you have a wonderful weekend and maybe it's getting a tad bit warmer.

Tristan and Isolde is a beautiful story even though it's so sad, I didn't realise that a film had been made of it. I've known the story for most of my life from Malory's poem. I love the J.W.Waterhouse painting - lovely post as usual.

i lost myself in that for a few minutes julie- thank you! I do know the stories,as you would expect, but i really enjoyed reading again!