OUT OF AFRICA, A DAUGHTER OF EVE 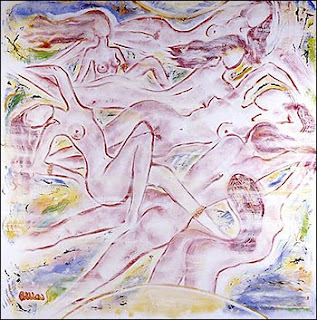 "THE SEVEN DAUGHTERS OF EVE"
by Ulla Ploughman-Turner
Sometime last fall, I think it was, I wrote a post illustrated with photos of my daughter, myself, my mother, my maternal grandmother and my maternal great-grandmother. Those are all the photos I have of women in my matriarchal line. And beyond that, I had only the name of the other identified woman to whom I am linked by mitochondrial DNA.
Mitochondrial DNA, or mtDNA for short, is DNA that is passed down only through the mother. (Even though men have mtDNA, they cannot pass it along to their children.) So for me, the known direct line is Kristen, Julie, Myrtle, Julia, Margrete and her mother, great-great-grandmother Margrete for whom there is no photo. Other than my sister and daughter, the only other living person that I knew of who shared my mtDNA was a male cousin, the son of my Aunt Ina.

That has changed. After I wrote my post, a blogging friend sent me a mtDNA testing kit through Gene Tree (www.genetree.com). Since the test costs $150, that was quite an early Christmas present! (Thanks, CB, for your generosity.) I took the test by swishing some mouthwash around in my mouth and spitting it into a container. I mailed it off and then sat back and waited. Usually, the test takes about 12 weeks. Unfortunately for me, there were changes at the lab and my test had to be re-done, so I had to wait five months, but late Monday evening, I received my results via e-mail!!

Oh, gobbledygook. Those numbers meant no more to me than they probably do to you. I found out that learning my mtDNA is only the beginning. Tracing my lineage is going to take a lot of study and hard work. But Gene Tree will help me, as will corresponding with other people who have been tested, and tons of research.

I did learn that I have one perfect match, meaning that there is a person out there who took the test and has my identical mtDNA from a common ancestor, probably many generations back. That person, it turns out, wishes to remain private, but he/she, I was disappointed to learn, is American with Norwegian roots. Plain old Norwegian?? I want to move away from Norway, way-far away.

I know that I originally came from Africa. We all do, there's no denying it. There was an ancestral mother there from whom we all descended. But I want to know where my people went from there. What lands, what continents did they traverse before they ultimately reached Norway?

One Theory of the Spread of  Haplogroup W
They say a little knowledge is a dangerous thing and that is probably the case with me, after having spent a couple of days perusing the Internet.
In the little bit of research I've accomplished (or understood), I've learned a few things. I learned that my haplogroup W, which Gene Tree calls a subgroup and other sources call a group, is relatively rare. (Well, I always knew I was special!) Back in 2001, a man named Bryan Sykes wrote a book called "The Seven Daughters of Eve: The Science That Reveals Our Genetic Ancestry". According to him, there were seven "clan mothers" from whom the majority (95%) of Europeans are believed to obtain their mtDNA. They were given the names Ursula, Xenia, Helena, Velda, Tara, Katrine and Jasmine. As you can see, there is no "W" name.
I learned that geneticists now believe that there were 10-12 Daughters of Eve, including a woman classified by the haplogroup W.  One site has nickednamed her Wilma and fondly uses Wilma Flintstone as a graphic for the Wilma clan mother. I am a daughter of a Daughter of Eve!
Apparently, the first Wilma was born somewhere in northwest India or northern Pakistan from 49,000 to 28,800 years ago. Her people had left eastern Africa via the southern edge of the Arabian Peninsula (there being dry land then at the mouths of the Red Sea and the Gulf of Arabia) and headed east along the coast of the Arabian Sea.
On one site devoted to the W haplogroup, I found that I am just one mtDNA marker short of being a match to a Wilma group of people who lived solely in Russia, and one marker short of a match with a group out of Poland. I also share markers with a lot of people from Finland. Does that mean my long-ago ancestors perhaps traveled west from Russia to Poland or Finland and then further west to Norway?
Or does missing that one marker totally mess up the formula and geographically place me somewhere else entirely, like Turkey, the Balkans or Eastern Europe? And if my ancestors were Russian, did they come north from Mongolia, China, Japan? When my aunt had her quintuple bypass her surgeon asked me if she was of Japanese ancestry (though she was as WASP as WASP can be). He said she had a very, very strong heart, the kind he had seen in Japanese people (strong heart, bad arteries). I laughed in his face at the time but now I wonder??

If I am understanding it correctly, this test is more anthropology than genealogy, less an indication of whom I came from than where I came from. And I want to - I NEED to - know where I came from, so I am determined to gather as much information as possible. Sigh, there is still so much to learn, and it's so complicated. I know what it means to be a "zero difference" match with another person, but what does a 1- or 2-difference match signify? My understanding of DNA sequencing, haplogroups, HVRI and HVR2, clades and subclades and all the rest is miscroscopic. And of course with a mtDNA test I still know nothing of the ancient homelands of my maternal grandfather's Scottish relatives or my father's Norwegian and Irish relatives.

But it's a start, and I'm really glad I took this mtDNA test. 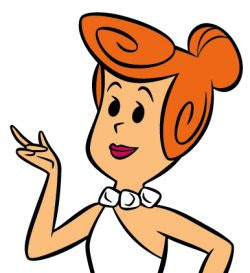 Holy Wilma, Julie! This was fascinating. I also got a headache just following the possibilities. I would not have the patience, however, my DH would LOVE it. Hmmmmm. Christmas possibility for him, maybe?

JULIE, have you had a chance to play with the DNAvigator? It's an inter-active map that you see the dots (your ancient ancestors) go back in time and you see the migration patterns {!!}
Also, we have private one-on-one DNA consultations with DNA experts that will use YOUR mtDNA reading and give you personal training on how to utilize the results even better :-)

Glad you are finding this interesting! If you have questions, just contact us :-)

Absolutely fascinating, Julia. Now you have me wanting to do the test too! LOL Not that those numbers would mean much to me either.

Since I am in research mode, your post was right on time. I have always known that we are all related...It just depends on what you find in your line as to who you might call yourself. I am apart of everyone before me, and it is really interesting to put names and faces to some of them. My sister and I are working together. She was researching our family line when it wasn't popular to do so. With the help of my Mothers notes and the computer, we have already made some real finds. And as I put this all together, I will share what I have.
Digging into history is hard work, and you get pretty dusty and tired.
Just when you think you have found a warm body...well, forget it and put him back in the ground because he or she doesn't belong to your family....Having fun, hope you are too, Mary

I enjoy learning about family history because of their stories.My parents studied geneology so I have a start from them.Learning about my mitochondrial DNA may be too deep for me.It is a fascinating subject though.

Who knew?
I never heard of any of this, but I find it fascinating.
Gee, I thought I was doing good when I (recently) found out I had some Scottish mixed in with all that Irish.

Hope you have a wonderful time at lunch with your sister.

fascinating stuff julie, i can see why youre hooked!

How exciting to have had your mitrochondial DNA tested! What a generous gift too. It looks as though it's going to give you a full time interest doing further research. I've wondered whether to have have mine tested at some point, I'd like to know whether I have Viking ancestry, it's a fascinating subject.

I think that test and its results are fascinating! I agree with you, I'd be wondering about the "where" as much or more than the "who".
[After all, I think most of us are aware of existing blood relations or relatives with whom we have no deep "bonds", so why seek more "bonds" with others, long ago and far away?]
This is a wonderful post!