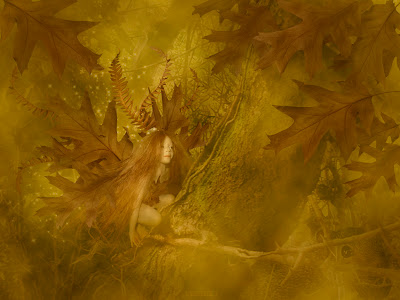 Back in September, I received an e-mail from a young lady named Brittany telling me she had found a tiny skull and wondered if it belonged to a fairy. She also wondered if she, herself, could be a fairy or a sprite.

At first I thought it was a joke and was quite upset to have received the e-mail (I thought someone was making a fool of me), but after several exchanges back and forth I was convinced that she was an actual 13-year-old girl. I asked Brittany why she had contacted me and she said it was because I "knew so much about fairies." Huh?

And then today, I received an e-mail from another 13-year-old girl named Alina, who made a comment on my post on "Pixies, Fairies, Elves And Other Week Folk," written back in March. http://celticanamcara.blogspot.com/2009/03/pixies-fairies-elves-and-other-wee-folk.html.

She too, asked me if these things are real.

Both girls must have been cruising the Internet for information about fairies and found my blog. I mentioned Brittany to my blogging friend Lila ("Indigo Pears") and she replied, "You ARE The Fairy Maven!"

Hmm, "The Fairy Maven"?? I never set out to be one. It's true, I have written quite a few posts about fairies. However, I have never said I believe in fairies. Although I have a couple of blogging friends who swear to their existence, I would have to say that as for myself, as much as I would like to see a fairy, I never have.

I wrote and told Brittany that I think she must have found the skull of a little animal. If she had found the skull of an actual fairy, I said, she would be the first person in the world to have done so. Moreover, I said, I think that a fairy is too unsubstantial to leave behind a skeleton. A fairy is gossamer and thistledown, not flesh and bone.

Having gotten to know Brittany a little, I was delighted to find that she is unlike the typical 13-year-old girl of today - unsophisticated, unspoiled, fresh, still having childlike beliefs in "the great possible." Although I could not correspond with Alina because she was a "No Reply" blogger, I think of her in the same vein.

As a child I often used to imagine how wonderful it would be to be a fairy; to be small and light enough to climb a flower stem, to live at the bottom of a tree behind a tiny door, to nap on a mushroom and sail on a leaf. I hope that Brittany and Alina, as they grow into adulthood, never lose sight of that other, magical and mystical world just behind the veil.

To that end, I sent Brittany this link, which Lila sent to me. It's from the Sept. 10, 2009 edition of The London Daily Mail online: 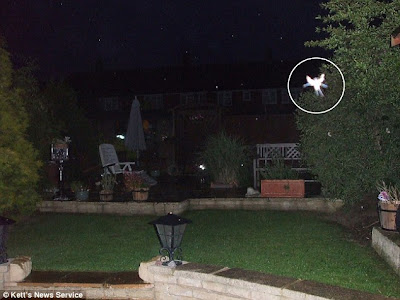 This is the photo Phyllis Bacon took from the doorway of her South London home of what appears to be a fairy in her garden. 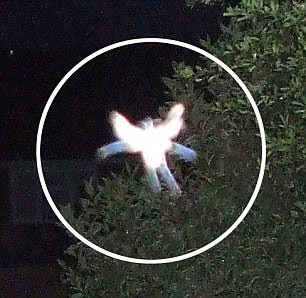 Close up of "the fairy" 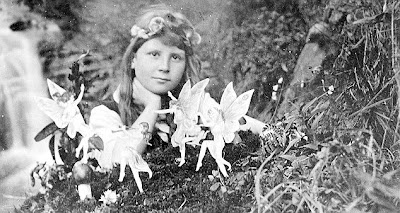 The famed 1917 faked photograph of the Cottingley Fairies,
mentioned in the London Daily Mail story

Back in 1917, a great many people believed in the authenticity of the Cottingley Fairies photo. In 2009, there are probably a lot of readers who believe Mrs. Bacon had a fairy in her garden.


Belief in fairies - and other wee folk - was once very common, especially in England and Europe. That belief has never truly died out. There are people out there today who claim to see fairies on a regular basis; others see orbs and wonder if they are fairies. As for me, do I believe in fairies? Let's just say that I believe in the belief in fairies.

(NOTE: I wrote this post months ago but other interesting or more timely subjects intervened and I never published it. Having received the e-mail from Alina today, I thought now would be a good time to trot it out.)

And it seems especially timely, since it was just a few days ago that I read about the Scottish movie "Kirk" in Ruthie's blog ("5 Precious Things"). The movie (which has nothing to do with Capt. Kirk of Star Trek), is about a 17th-century Scottish pastor named Robert Kirk who believed in faeries. He wrote a book called "The Secret Commonwealth of Elves, Fauns and Faeries". The movie looks and sounds extremely interesting and I hope to get my hands on it when available.  Here's a link to info about "Kirk": http://www.mjsimpson.co.uk/reviews/kirk.html.

Those girls came to the right place. I like that....The Faery Maven....it fits you somehow. I've told you before, you've taken up where Daisy left off. And for that I'm very thankful!

Great article. Boy, do I love faeries. You know, we do have them here in Brooklyn. I used to have them when I had my magical garden at my other house, but haven't seen them in my new place. But, the other night it was after dark and I was walking home from work and saw the familiar flash of light out of the corner of my eye. I was thrilled to say the least.
Mary

What an enchanting story. I've believed in fairies ever since Tinkerbell convinced me as a child. Brittany and Alina - keep on believing. You many never see a fairy but they will know you are out there sending them good wishes.

Faeries and leprechauns, eh? I wish I believed...

i have gotten my fair amount of emails too but yours are way cooler than mine
mine are mostly funny ladies asking me to advertise their mermaid books or fiction books or giveaways and even sponsor them!
aren't they funny? te-hee!

what i truly believe is in keeping a child like state of mind when i am enjoying myself.
hugs!

A wonderful post for all of us who enjoy your "take" on things!
The girls who write to you will find an ally and trustworthy mentor.I think that having room for imagination and folk legends in our minds can only make us more creative and resilient!
Thanks for the link to the new fairy movie!

I went to an exhibition recently and saw the famous Cottingley Fairies original photograph.
I went to see some Arthur Rackham originals, as I adore his work.

There were many beautiful Fairy illustrations, as it was an exhibition of the history of childrens books and of course Fairy stories. I saw some beautiful Fairy pictures, as children we are enchanted by them.
You make a lot of sense in this article.