THE HOLLY AND THE IVY 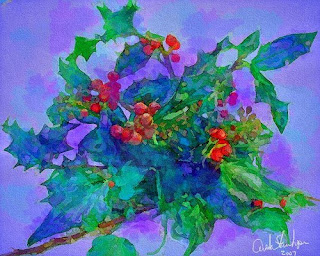 "HOLLY AND IVY" by Anita Stanhope

THE HOLLY AND IVY CAROL

"The holly and the ivy,

When they are both full grown

Of all the trees that are in the wood

The holly bears the crown.

"O the rising of the sun

And the running of the deer

The playing of the merry organ

Sweet singing of the choir.)

"The holly bears a blossom

As white as lily flower

To be our sweet Saviour.

"The holly bears a berry

As red as any blood

To do poor sinners good.

"The holly bears a prickle

As sharp as any thorn;

On Christmas Day in the morn.

"The holly bears a bark

As bitter as any gall;

For to redeem us all.

"The holly and the ivy

Now both are full well grown,

Of all the trees that are in the wood,

The holly bears the crown." 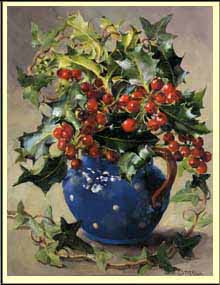 VASE WITH HOLLY AND IVY

The Holly and Ivy Carol has been around since the 17th or 18th century. While its author is unknown, it was first published by Cecil Sharp. It is most unusual for a carol like "The Holly and the Ivy" to have survived over the years, especially during the stern Protestant period of the 17th century.

However, bringing in the holly and ivy began long before the birth of Christianity. Pagans had customarily decorated in winter with evergreens culled from the landscape. When everything else on the landscape was dead or dormant, evergreens reminded them of better times to come -- the return of a green landscape in spring.

Ivy had close ties with the Roman god of wine, Bacchus. Holly, meanwhile, figured prominently in the Roman celebration of the Saturnalia (upon which the Christmas holiday was directly modeled), as it was considered sacred to Saturn. Among the Celts, holly played a major role in summer and winter solstice observances. 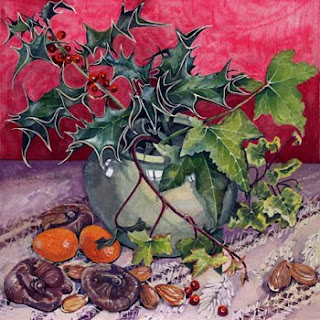 "HOLLY AND IVY" by Roger Cockram

Holly and other evergreens were subsequently adopted by Christians as Christmas decorations. This, despite protests from disapproving church fathers, who regarded the decorations as 'too pagan.' Such protests notwithstanding, evergreen decorations were well on their way to becoming Christmas institutions, symbols of the pagan past co-opted by the new religion.

The holly, especially, took on Christian symbolism. As reflected in the carol, holly's "white as lily" flower is an allusion to Christ's purity, through Mary. The red color of holly's berry is associated with Christ's blood. Holly's thorny prickle is an allusion to the crown of thorns worn by Christ. And the bitter taste of holly's bark could be a reference to the drink offered Christ as he hung on the cross. 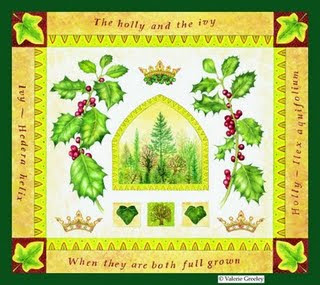 
Did you notice that the holly is the focus of the song, with the ivy being mentioned only once (not counting the repetition of the first verse)? David Beaulieu, who provided the above information in an article called "The Holly and the Ivy - Meaning Behind a Curious Christmas Carol", says the answer may lie in the fact that the carol is based on older songs, such as "The Contest of the Holly and the Ivy".

In that song ivy plays a role equally important to that of holly. The mention of ivy in "The Holly and the Ivy" is therefore a hold-over, says Beaulieu, a remnant from an earlier era. He writes, "The influence of the earlier songs about the holly and the ivy was apparently so strong that the ivy was given a cameo appearance in this one, too -- despite the fact that only the holly has any major role to play in it."

He adds, "What we see played out in 'The Contest of the Holly and the Ivy' and similar songs (perhaps dating back to medieval times) is the rivalry between men and women, thinly disguised as a contest between the holly and ivy. Holly was conceived of as being masculine in the plant symbology of the time, probably because it is more rigid and prickly; while the softer ivy is associated with the feminine in this tradition." 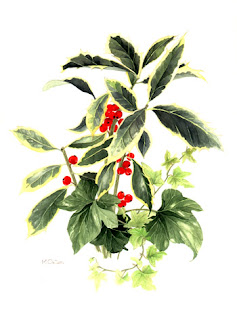 Although I had read the pagan lore about the battle between the Ancient Celts' Holly King, who ruled over winter, and the Oak King, the Green Man who ruled over summer, I had not heard of the contest between the masculine holly and the feminine ivy. However, it does make a lot of sense to me! The reference to the holly's crown in "The Holly and the Ivy" should now make more sense, says Beaulieu, as should the inclusion of the ivy. 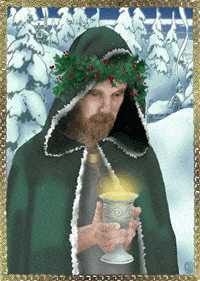 Concludes Beaulieu, "The people of earlier epochs were, by and large, closer to the earth than are we moderns. They paid attention to plant relationships that probably escape most 21st-century folks. They were also more inclined to the use of symbolism, including plant symbology.


"Noticing an ivy vine in the forest twining itself around a holly tree, for instance, afforded them ample reason to compare the two plants. Out of that comparison, a piece of plant symbology was born. And as a result of that plant symbology, the holly and the ivy will remain intertwined for ages -- not only in the forest, but also in song." 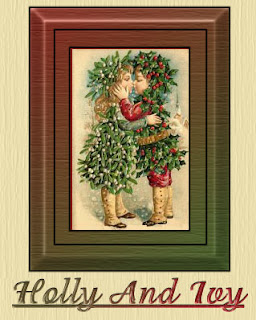 In Scandinavian mythology, the holly belonged to Thor and Freya. The plant’s association with Thor's lightning meant that it could protect people from being struck by his bolts.

Norsemen and Celts would plant a holly tree near their homes to ward off lightning strikes. The crooked lines of the holly leaves most likely gave rise to its association with lightning, as well as the fact that holly conducts lightning into the ground better than most trees. 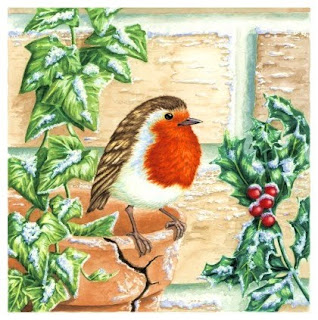 CHRISTMAS ROBIN WITH HOLLY AND IVY

The holly and the ivy, with their green and red colors that are traditionally associated with Christmas, have always been taken indoors during the winter with the hope being that the occupants would survive difficult conditions just like these hardy plants.  This holiday season, I plan to use the holly and the ivy as symbols of Hope for me and my family in our trying times. They will also help me celebrate Olde Christmas in the midst of modern-day Christmas.
Posted by Julie at 3:47 PM

Very informative...and I just love those pictures. This is such a special time of the year. I am just so excited.
Mary

Aaaah! Holly, ivy............I sometimes curse them in the garden, prickly holly and fast growing ivy......but I also LOVE them both and must have them around at Christmas. We always tucked sprigs of holly behind mirrors, pictures etc. when growing up - had plenty in the garden for free, and money wasn't available to purchase a lot of glitzy baubles. We also made paper chains and hung them across the living room. Funny, now I have some money to buy the baubles but much prefer Nature's free offerings - they are so beautiful.

Oh Julie! That painting by Stanhope (first one) is gorgeous!!!

Great holiday reading - and the pictures are wonderful! Hope all is well with you this season. Enjoy the little moments...

Lovely pictures - and great information. I learn so much and enjoy your posts. I always save it for last so I can spend plenty of time reading and learning. I especially like the robin postcard.

I too luv the Holly and the Evergreen. Great Post.

I've just read Norman Iles interpretation of the auld Carol The Holly and The Ivy where he has removed the obvious crude Christian substitutions. It reads as follows,
The Holly and the Ivy
When they are both full-grown
Of all the trees that are in the wood
The Holly/Ivy bears the crown

Makes much more sense to me.

This version rewritten by a pagan makes the crude christian rewrites look awkward.

The Holly and the Ivy

makes much more sense to me.