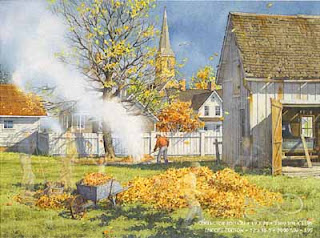 I'm not sure how many people know the meaning of the title of this post. I Googled the phrase and found a lot of confusion and not many answers. Apparently one or more dictionaries defined it as warm, and occurs when seaports are free from ice.

On one word usage forum I looked at there were many Americans who were stumped by the phrase. It may be of Midwestern or far northern states' origin. It is a well-known term here in North Dakota.

Open Winter occurs when the temps are unseasonably mild and the snows of winter are held in abatement. The big waters remain free of ice and wildlife are easily able to get out and about to feed in fields and along rivers. But it does apply to humans as well! 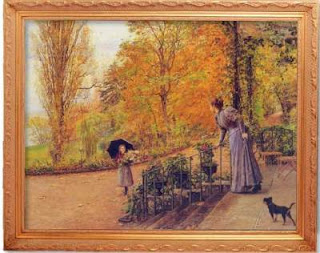 "WAITING ON THE VERANDAH" by Marie Firmin Girard

In dramatic contrast to November 2008, our spate of mild weather continues into the last week of November. It's generally been in the 50s and even some 60s. I've been able to go outside on a  comfortably warm afternoon to observe dozens of cedar waxwings enjoying a feast from red-fruited trees (crabapples?) Since the berries are fermented, I do hope the birds didn't have far to fly.

On late afternoons, the light slanted very low, turning the bare tree branches into an orange-y rust. It is pure pleasure just to drive along the Bismarck streets and observe the patterns of the branches against a blue sky.

Blue skies. It may not seem much to you, but it means a lot to us. The sky has seldom been blue in Bismarck for almost an entire year. Winter - which came early - was pure hell, spring was a wet hell, summer was not quite hell but cloudy and wet. After an unbelievably beautiful September, October reverted to deja vu - cold, wet, cloudy, and gray. 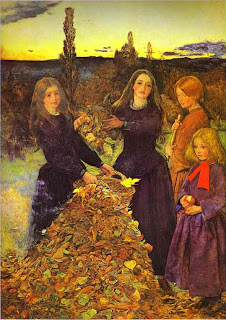 And then came November, an open November - with mild and dry weather. One of the clerks at the post office told me it's because the 2008-2009 winter is an El Nino season. That may be the cause, as other El Nino years have meant mild winters for us. I hope so. But whatever the reason, I'll take it. I wear just a light jacket, not a winter coat. No warming up the car - just a quick defrosting of the windows. No slippery or snow-clogged streets to maneuver.

I know, I know, I blog about the weather a lot. We North Dakotans get kidded about talking so much about the weather. But at least it means that we are more connected with nature than our city cousins. Bismarck is classified as a small city, but because of our northern location, we are often cast into the role of rural pioneers as we shovel out from blizzard after blizzard.

"A SUSSEX AUTUMN" by Henry LaThangue

This year, we got to experience a Thanksgiving that most of America enjoys: seeing the subtle colors of late fall - the browns, the grays, the golds - instead of a blanket of white. We were able to put pumpkins out on the stoop without having them freeze to the steps, not to be pried loose until spring thaw.

We could travel "over the river and through the woods" to Grandma's house for Thanksgiving without having to break out our winter survival kits (which should always "be kept replenished and stored in the trunk of your car"). When Thanksgiving dinner was over, we could send the kids outside to play without jamming them into snowsuits, mittens, scarves and boots. 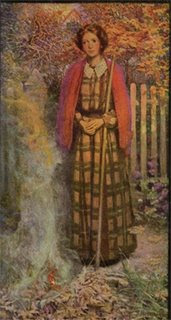 Artist Unknown to me

The turkeys were the only things that were frozen. The person carrying the pies from the car to the house didn't slip on the ice and fall. The smokers could be shooed outdoors without guilt. The weather at the Macy's Day parade actually matched ours for once. We could take an outdoor stroll to walk off our turkey dinner without forging through deep snow.

The freshly-cleaned house did not have an entryway full of smelly wet wool coats and dripping overshoes. People going to the Black Friday sales didn't fall over dead in line like so many frozen toothpicks. 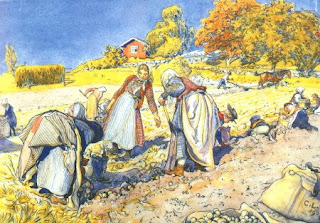 For now, the snowblowers are parked, the shovels sit unused, the cars start happily without protest, the pheasants and other wild birds forage at will. The sidewalks and streets are bone dry, the dog doesn't mind going outside, the Christmas lights could be put up without sliding off the slippery roof. If it were allowed, we could still burn leaves (most ND cities have burn bans). We could even do last-minute gardening chores.

As my husband said, every day without snow is a day off winter. We've already shaved a month off winter this season.

God's in his heaven and all's right with the world.

And for all of this, I am so truly, truly thankful. Hallelujah for an Open November and let's hope it continues into an Open Winter.
Posted by Julie at 4:23 PM

Ah, yes, we have been having some strange weather, too. One day it is in the 60's, the next day 20 degrees cooler. I am actually longing for a nice snowstorm. It has been so long for us. For the past few years we have gotten so little snow.

By the way, I love those pics on your blog.
Maru

What a lovely post - I'm so glad you are enjoying the Open November - that phrase meant that boats could get out and about in Alaska without having to deal with ice in the bays.

We are in the stormy mode here - every day or so another whopper comes walloping in from the ocean - high winds - rain whipping you as you try to go about chores - no one is putting up outdoor decorations this weekend.

I'm familiar with the phrase 'open weather' and of course in the UK we spend as much time discussing the weather as you do in ND:) Not all that much in the way of blue skies here though, we've had a great deal of wind and rain and yesterday there was a dusting of snow over the moors.Enjoy your open winter while you can.

Those art works are exquisite, Julie. Somehow I wear the badge of northern winters with honor. That said, it is nice not to have had to dig out as of yet. When I lived in WA, el Nino winters were nice as the temps were indeed milder. I thought I remember reading that they occur about every 7 or 9 nine years; something like that. But I wouldn't have a clue. At any rate, I just especially love the 4 girls by the pile of leaves painting!

We have been having an open November here also. We know to get out and enjoy it while we can because here in New England it can close quicker than you can bat an eye!
I have never heard the term "open winter" before but it does make sense. You have posted such pretty pictures.

I'm so happy you're having some good weather....finally! You seem to get your share (plus some others) of bad weather and gloomy days. Hurray for sunshine and blue skies!!

May your open winter continue!!!
Here's to sunny skies!

We Idahoian's understand. Although we have been in the 40's and night time 20's we are snow free here in the valley. We had a dusting of snow a few days ago and then the blue sky broke in and the sun was shinning. And since we are used to winters past, we are also on the watch for the turn into what we know best. Doors that are frozen shut on our cars and house doors. Falling on ice is the topic of conversation along with the weather. We have ice things to put on our shoes because of the ice. But it is dry as can be, and I think our plants are even a little confused.
I love the snow for awhile, but then I am ready for spring.
My kids are waiting for a big storm...they want to skii.
Happy Blue skies Dear friend, Mary

As always, your posts are not only beautifully illustrated, but full of knowledge and little known facts :-) And we LOVE them :-)

Hi Julie, You always have such interesting posts and I love all of he art you include in them. Our weather here has been unusually warm too but yesterday it turned cold in a hurry. We had our first snow flurries last night. I hope you and your family had a wonderful Thanksgiving. I had never heard the term open either until I read your post. I'm sure I must have read it somewhere but it went right over my head. Thanks. great post.