WHAT A DIFFERENCE A YEAR MAKES 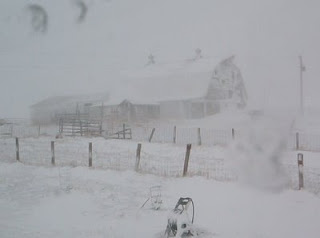 Does anyone remember this photo that I posted on my blog last November, taken EXACTLY one year ago today? Trying to find a single positive thing about the horrid snowstorm that whalloped those of us living in North Dakota in the first week of November 2008, I posted this photo borrowed from the KFYR-TV Sky Spy Photos. In it, I saw what today I still see in the lower right hand side - a happy snow couple dancing their hearts out in the midst of a North Dakota blizzard.

And what's more, they remind me of the Scottish dancing snow man and lady in "The Snowman" video which came out in the 1980s when my daughter was little.

Today, in Bismarck, it was 72 degrees. It was the warmest day of a lovely warm week that none of us took for granted, especially after the weird fall we had. October was a dull, dreary, dark, grey litany of cold, cloud and wet (rainy and/or snowy days). Given the wretched winter we had last year, we were all dumbstruck that we would have to endure yet another slap in the face by having to accept an early winter this year. So, this week, when we were granted a reprieve - October weather in November, we responded.

We raked leaves - those multitudinous leaves that this year never turned into the blazing colors of fall. They had died on the trees, still green. They did eventually turn brown, and all fell off in about two days.

We walked our dogs along the pathways of the Bismarck Municipal Golf Course. (Okay, I didn't walk Gracie - she is uncontrollable on a leash, never having been trained on it. But she did tear around our big back yard in perfect abandon.)

We groused that there was no snow on the ground for the benefit of hunters on opening weekend of deer hunting season. Okay, you guessed it - not me again. I don't want to see Bambi get shot!! Dan used to be a deer hunter, but work has prevented him from going deer hunting for many years. (I'm secretly glad, and so is Kristen. But although even more of a Bambi lover, she does like deer jerky.)

Deer hunting is almost a religion in North Dakota, and - at least in my day - school was dismissed at noon on Friday of opening weekend. It is also known as "Ladies Shopping Weekend", with hunting widows attending craft fairs and other ladylike venues that have not one whiff of testosterone about them. The theory behind this is that if you - the husband - can spend all that money on rifles, bullets, blaze orange jackets and hats, gas, food, lodging, beer, etc. etc., then I can spend an equal amount of money on frilly, fluffy, cute stuff that guys hate. 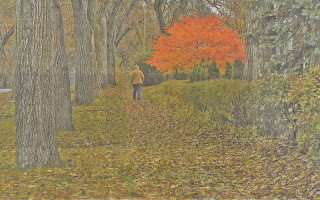 
We ran as many errands as we could think of, sans the coat and gloves we had already taken out of storage. I am sure that good little church mice stocked up on new boots, snow shovels, antifreeze, sidewalk salt, snowblower parts and the like. Me, not so much. But I accomplished a lot too.

Having sold a bunch of items on eBay, I ran to the post office many times this week, plus I went to the bank, the grocery store and shopping for my sister's birthday yesterday. A belated birthday greeting to my dear sweet sister Glori! (I'm taking her out for a celebratory lunch tomorrow).

We took beauty where we found it. Above, a photo from the Bismarck Tribune shows a solitary walker
strolling through the historic Cathedral District on a sidewalk obscured with leaves, accented by a small blazing orange tree. This year, while the larger trees were a disappointment, the small trees and bushes stepped to the forefront, giving us a range of colors - orange and red, scarlet and vermilion - not provided by the trees. 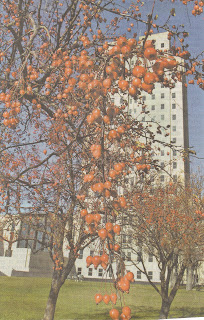 This very morning, we in Bismarck awoke to this sunrise: 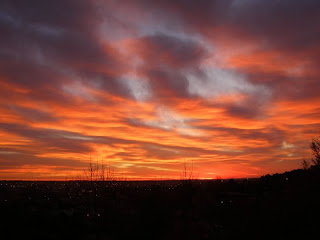 I ask you, what could be a better gift to start a day, a better present from the new month of November? I don't know if this glorious sunrise was from the Christian God, or the Native American Great Spirit Wakan Tanka, or Mohammed, or Buddha, or the Hindu gods, or the Higher Power. I don't really care. It is a wondrous gift, where ever it came from, and I accept it with gratitude.

I've expressed the same sentiments here before, but I can't help but reiterating them. No matter how technologically advanced man has become, there are still things, like this sunrise after weeks of cloud and rain, that stir the primordial human that resides within our modern selves. No matter how we have trained ourselves to not feel it, we still respond to the change of seasons.

It is the same with the call of the geese, either heading north in the spring, or south in the fall, that makes all of us respond in the same basic, primitive way. (By the way, I have not yet heard any geese heading south - perhaps there is hope for an even more protracted fall?)

And as for those dancing Scottish snow people? They'll be back. Aye, ye can count on it!

For more photos of the blizzard of the first week of November, 2008, go to: http://celticanamcara.blogspot.com/2008/11/week-in-life-north-dakota-style.html.
Posted by Julie at 10:54 PM

I'm glad you have finally had some good Fall weather and been able to enjoy warm colourful days before the winter begins. The sunrise photo is beautiful. Glad also that you managed to sell some things on E-Bay:)

I always love reading your thuoghts, Julie. Fabulous pictures as always. Than sunrise is truly beautiful.

What a lovely fall report. So glad that those snow people are only dancing in memory - or at least waiting to come back on a colder day. Enjoy the nice weather as long as you can.

What beautiful photos and what a lovely part of the country you live in. This is my favorite time of the year.
Mary

Your words are welcome to my heart - as you always write from yours! I need for you to email me your address, please. colleen_blake@comcast.net

What a contrast to a year ago! I am so glad you have had a wonderful week! And, thanks for wrting so well about it!

IT is very amazing at what can be taking place one year later from the previous year. We have BAD weather in our Gulf coming our way...weird to have a hurricane so late in the season.

But we, like ya'll have had a VERY warm October...even for Louisiana. Blah....
I'm ready for some cooler weather...but not a hurricance thank you very much.

Enjoy the beauty and warmth and think of all the $$ ya'll are saving on gas and utilities! HA!

Take care Julie.....
OHHHHH....I went to something today that you would have LOOOOVED.
Check my blog in a day or so...I will have more photos up there then. I'm too pooppppped out tonight to do it. HA!

What a wonderful difference, I am so glad that you are warm. Idaho has enough weather for this Southern California gal. When we moved here, it was a real treat to get snow until we could not open our car doors and had to burn more wood than I can tell you. At 25 below this one year, I was ready to move back to Lotus Land and forget the 4 seasons, but here I am and we do love it here. Fresh air and deep blue sky is a gift to us all. We here that snow could fall this week...We are used to having snow at Thanksgiving.
Happy Fall, Mary
I am still filling trash cans and giving stuff away. It is fun to make a few dollars on e-Bay:)
Fun!!!

It is almost time for Samhain to be upon us. I do hope you have Samhain information like you did last year. Looking forward to seeing it. Like you I am Irish and Scottish and I love Samhain.
Go robh maith agat!