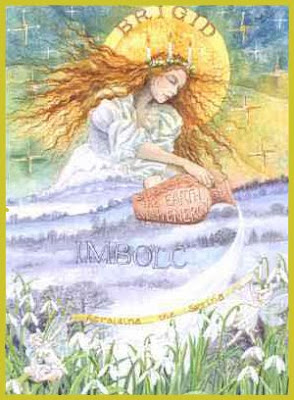 "IMBOLC" by Wendy Andrew
**********
Tomorrow is the day usually chosen to celebrate Imbolc, one of the four major holidays of the Celtic Wheel of the Year. However, Imbolc - also called La Fheile Bride (Breed) in Gaelic, or Brighid's Day - is celebrated by some on February 1, so I thought I would write a post today to feature many of the wonderful Imbolc images I found on the Internet.
In fact, I found so many images that there are plenty left for tomorrow's post when Aine will tell us all about Imbolc/La Fheille Bride.
Many of the artists used symbols associated with Imbolc in their artwork. (I attributed as many of the paintings as I could.) See how many symbols you can identify.
Enjoy! 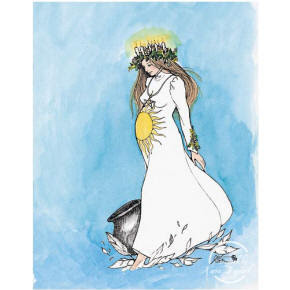 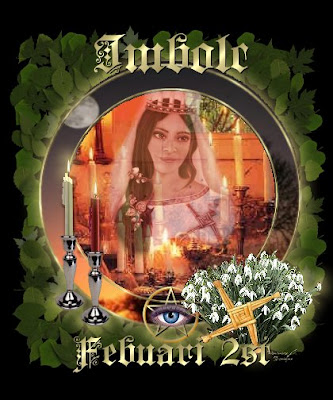 Imbolc card from Healings of Atlantis 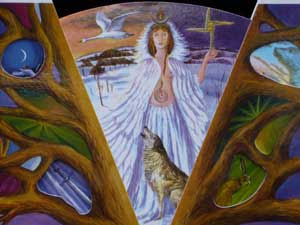 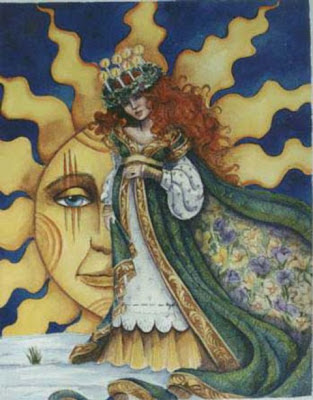 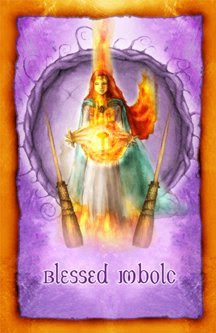 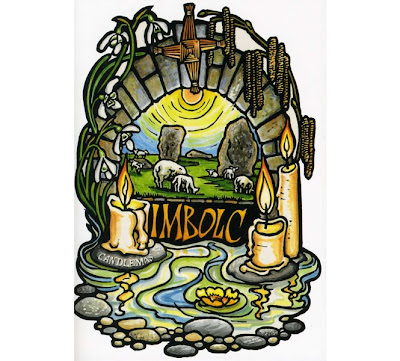 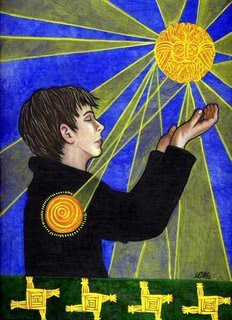 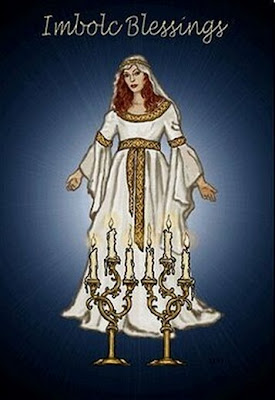 I tried to eliminate all images that contained pentagrams, for I do not want it thought that I am a Wiccan. However, I see that one image slipped by me. Sorry about that. I also did my best to not show Imbolc images containing snakes, as I hate snakes. However, the snake is a symbol of the goddess, and one image here does show a snake - however, it is the smallest image so perhaps you didn't even spot the snake.

I also apologize if some of the images are haunting, as one commenter said, or startling or unsettling. I have seen so many images in my research that I am used to them, but some viewers might think them very vivid.

ADDED TUESDAY: I had to add the comment by Sue, The Purple Pixie, of The Creative Spirit. She wrote:

"Happy Imbolc Julie, and wonderful pictures. The pentacle doesn't always mean you're wicca, we use it as a symbol of the 5 elements of man, Earth, Air, Fire, Water and Spirit. also I know many Druid friends who wear them too. It's a sign of protection and also one of Paganism. I know the symbol has been over used in far too many spookie, horror films.... much to my amusment. lol."

Blessed Imbolc! We will be celebrating next Sunday.

I have no idea what these mean, but it looks wonderful.
You are my teacher...
Hugs, Mary

Lovely images, with lots of light.

I too, have not heard of this but am anxious to learn more! The images are lovely & haunting at the same time..

I always know I'll learn something new here....and I just did! I had not heard of this celebration. The images are lovely....even that little one with the snake!! Yes, I noticed! But being one who doesn't like snakes, I'm always on the lookout for them.

Happy Imbolc Julie, and wonderful pictures. The pentacle doesn't always mean you're wicca, we use it as a symbol of the 5 elements of man, Earth, Air, Fire, water and Spirit. also I know many Druid friends who wear them too. It's a sign of protection and also one of Paganism. I know the symbol has been over used i far too many sppokie, horror films.... much to my amusment. lol.

Well done on your wonderful blog post as per usual.

For many years I knew this day as Candlemas. In recent years found it is also called Imbolc. Lighting candles in honor of the wheel of the year and the order in the universe.
Beautiful post!

Julie,
Is this the same as "St. Brigid's (Bridget) Day???"
I saw the "St. Bridget' Crosses" in the one image.
I'll have to look into it further.....never heard of this other.

I know your blog through Michelle, Poland (Miszelkowy schowek) and visit it quite often. It may be of interest that the Roman Catholic church kind of incorporated Imbolc - by making 2nd day of February the day of Holy Mother of the Candles.
You are a valuable source of knowledge of Celtic traditions for me. Thanks a lot.

Blessings to you from Ireland with hope of a beautiful spring to come.
-Susanne

Blessed Imbolc to all. Bring on the light!! The pix are beautiful! However If you post a pic, please state name of original artist, if you enhanced it then great, but tell who originally drew it as well. The pic "Imbolc" posted by Karen Bagnard was copied from the book Celebrate The Earth by Laurie Cabot and Jean Mills.page82.If you are curious about this and other holidays this a wonderful book for you. Thanx, Jo Anna in Cleveland. Ohio

You confuse me, Joanna. I did attribute the drawing to Karen Bagnard, and I certainly did not enhance it. It is as I found it on the web.