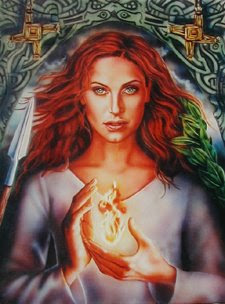 Aine of the Celts here ~


On our Celtic Wheel of the Year, today is Imbolc, the Midwinter Festival that is one of our four major holidays of the year. It falls exactly halfway between Yule, the winter solstice, and Ostara, the spring equinox. Here in Britannia, snowdrops are peeking through, the first sign of spring. Ravens are building their nests, and larks are singing overhead.


Sheep are also lambing, and they give this holiday its name. It marks the onset of lactation in ewes soon to give birth. Imbolc means "in the belly (of the mother)". Another name for Imbolc is Oimelc, which means "ewe's milk". With the lambs comes milk, our first fresh food of the season. 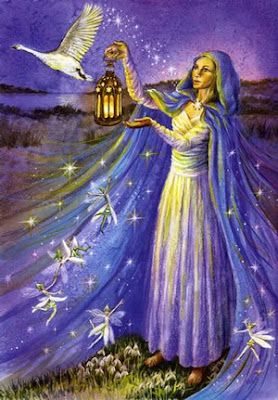 "BRIGID WITH SNOWDROP FAERIES" by Wendy Andrew
Today is sacred to the Goddess Brighid (also spelled Bride (breed), Brigid, Brigit, Bridget, Briganta, Brigan, Brid and other variations). Her name means Bright One, High One or Bright Arrow. In Scottish Gaelic, her day is "La Fheill Brighide". In Irish Gaelic, it is "La Fheile Bride". 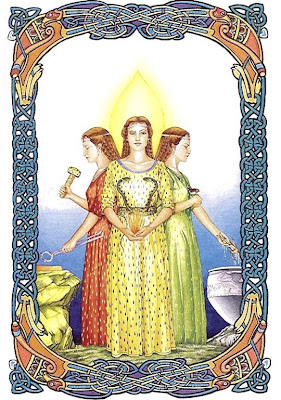 Artist Unknown
Purification and fire are important aspects of this feast. The lighting of fires today represents the return of warmth and the increasing power of the sun. The presence of Brighid reminds us that the strength of women is manifest in the invincible fire that burns steadily through the heart of winter, no matter how dark and cold the world. Another name for this day is "The Feast of the Waxing Light".


For us, the success of the new farming season is of great importance. At this time of year, our precious food stores are getting low. We perform Imbolc rites to harness Brighid's divine energy so as to ensure a steady supply of food until the harvest in six months. "BRIDE OF IMBOLC" by Jennifer Galasso
Women and girls make Bride dolls and beds and decorate them prettily with beads, shells and flowers. They also make Brighid crosses.
Other sacred rituals include blessing our seeds and decorating and consecrating our farming tools. We clear the fields and sprinkle ashes on them. We leave offerings of bread, milk, grains and seeds for Brighid. We clean and purify our homes and light new hearth fires dedicated to the goddess. From these, we start a giant outdoor bonfire. We set torches alight and circle the fields in procession. Afterward we hold a great feast. 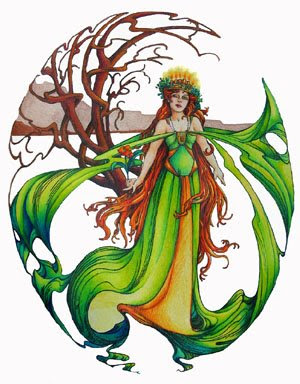 "BRIGHID" by Teri Rosario
Bridghid is also associated with sacred wells. On this day, Calleach, the ancient hag, bathes in her sacred well and becomes Bride the maiden. Brighid has a holy well in Kildare, Ireland. The Sacred Flame at the well is kept by 19 virgin priestesses called Daughters of the Flame. No man is allowed near the well, and the preistesses do not consort with men. 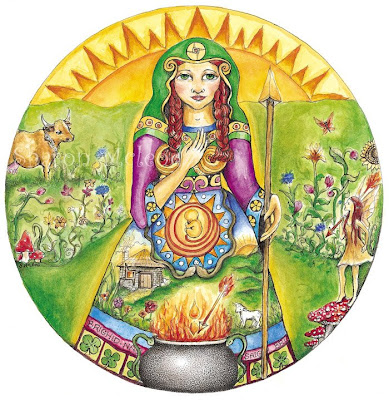 "BRIGHID" by Sharon McLeod"
As I peer into the future, I see that Brighid is one of the few Celtic goddesses who survived after the days of us pagans. Her sway over Ireland was so strong that the Church "borrowed" her and turned her into Saint Brigid or Brigit. The Christians say that St. Brigit was the daughter of a Druid who was converted and baptized by St. Patrick. Catholic nuns now tend Brighid/St. Brigit's sacred flame.
This day is also celebrated by the church as Candlemas, the day to bless all the candles that will be used in the following liturgical year. It is also called the Feast of the Purification of the Virgin Mary. 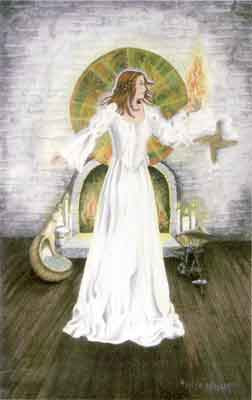 "BRIGHID - GODDESS OF THE HEARTH" by Mickie Mueller
**********
Imbolic/Brighid's Day is a time of rebirth and inner transformation, of inspiration and creativity. I hope you experience all these today. 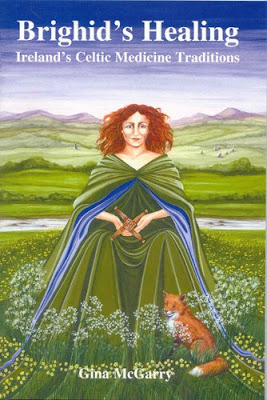 ~~~~~~~~~~~~~~~~~~~~~~~~~~~~~~~~~~~~~~~~~~
Julie here: Did you spot all the symbols for Brighid in today's and yesterday's images? In addition to the snake I mentioned in my previous post, there are: fire/light/sun, snowdrops,
white candles (and candle crowns a la St. Lucia), sacred wells, the wolf (February is the wolf moon in Britain), the swan, pregnant women to symbolize fertility, sheep and lambs, brooms or spinning wheels in honor of the keeper of the hearth, a white cow with red ears, arrows, spears, the new moon and Brighid's cross. 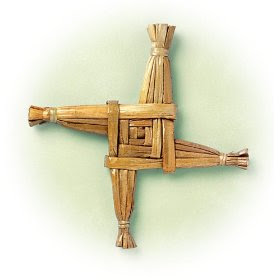 Thank you for the lovely post and the lovely pictures. Your posts are always a pleasure - and always teach me something.

This is a lovely and interesting post Julie, the artwork you have found is beautiful.

This is Fascinating! And I love how you wrote it. Thanks!

Wow! So informative ind interesting!
I will tend my hearth and think of Brigit!
I made a quilt with a block based on St. Brigit's cross once!

I didn’t have time to read this before so I came back…
I enjoyed this post, when my kids were little we used to
Celebrate Candlemas. I didn‘t realize it was also called Imbolc. We use to make beeswax candles while the gingerbread was baking.
A few of our friend would join us for the day and would bring homemade applesauce and other wonderful things to eat…

Hope you are feeling better,

So glad you posted this. It is absolutely beautiful!

Excellent information Julie! thanks for the lesson. I've taken quite a liking to Brighid. love all the pictures you display with the explanations.

Hi Julie! Just dropping in to say hello. Hope all is warm and cozy in your corner of the world. it has been rainy and cold here. Well, cold for us.

This is a lovely post and I love the pictures. The first picture is by Lisa Iris by the way. I only know because I just bought a necklace with the image on it. Her website is http://www.lisairis.bizland.com/\

FYI...The third illustration of the Triple Brigid labeled "Artist Unknown" was painted by Miranda Gray for R.J. Stewart's book Celtic Gods, Celtic Goddesses. Just thought you would want to know, and that Miranda should have credit. :-)