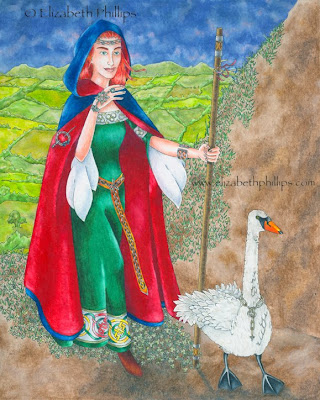 "BRIGID MAKING HER WAY" by Elizabeth Phillips
**********
I FINALLY PUBLISHED MY POST ABOUT IMBOLIC/BRIGHID'S DAY! BUT BECAUSE I STARTED IT YESTERDAY, IT SHOWS UP AFTER THIS POST. (BLEAGHHH TO BLOGGER.)
I really put a lot of work into writing it and finding the artwork, so I wanted to make sure I posted it. But I had a good reason for not finishing it yesterday. Robbie Burns, that old Celt, said it best: "The best laid schemes o' mice an' men gang aft a-gley."

I badly wrenched my knee yesterday afternoon and now cannot put weight on it. I can scarcely walk on it, and only with a great deal of pain. I spent a couple of hours sitting in a wheelchair at the after hours clinic after work.

The result is that I have an order to stay off my feet for a few days, and got a pain/anti-inflammatory prescription and the recommendation to use a heating pad.

By the way, I have nothing but bad to say about Dr. Dipwad, the after hours clinic doc I saw. He was all brusque and business and very much in a hurry. He never once asked me how much pain I was in or even touched my knee! What an a--hole! Thank goodness the nurses and clerks were so nice. They had the extra detail of wheeling me from reception area to waiting room to exam room to the bathroom to the x-ray lab to the pharmacy and back to the front (where my dear husband took over from there). Thanks, ladies!

I had a very restless night last night, so I am going back to bed, from which I won't venture for a few hours, except to crawl to the bathroom. The only reason I am out here right now is that I had to get my medication, which I had left on the dining room table, and to get the phone to call my office. Must go make that phone call right now.

A friend had e-mailed me this joke but I didn't read it until this afternoon:

Boy, if this doesn't hit the nail on the head, I don't know what does!

Two patients limp into two different medical clinics with the same complaint. Both have trouble walking and appear to require a hip replacement. The FIRST patient is examined within the hour, is x-rayed the same day and has a time booked for surgery the following week. The SECOND sees his family doctor after waiting 3 weeks for an appointment, then waits 8 weeks to see a specialist, then gets an x-ray, which isn't reviewed for another week and finally has his surgery scheduled for a month from then. Why the different treatment for the two patients?

The FIRST is a Golden Retriever. The SECOND is a Senior Citizen. Next time take me to a vet!

I agree! Our family vet is much nicer, and at least he would have patted me on the head and checked my paw. BTW, Dr. Dipwad isn't my regular doc. Dr. Jeff is a good dude. In fact, I think he would have had a great deal of sympathy for me, having had knee surgery a couple of months ago.
SEE BELOW FOR THE IMBOLC/BRIGHID'S DAY POST!!
Posted by Julie at 7:47 AM

Oh my! How did you wretch it? Aren't those "Doc-in-a-box" guys SUPER! Yeaaaah, right.

Too many patients, too much sleep-deprivation and too high a mortgage, probably! Just wait- I think Karma will take care of 'em - heehee
In the meantime, rest, recuperate and repair!

How sad that you got such "treatment" at the hands of a doctor - but so often it is the case, doctor rushing, nurses and aids doing the helping.

Hope your knee is doing better soon - I know knew pain and it isn't fun. Will be watching for your next post - I enjoy them so very much.

Ouch! Please take care of yourself and get lots of rest. We'll be here to read your post when you post it.
Hugs, Susan

Those vets also get appreciative slobbery licks and kisses from their patients ... perhaps our doctors are a little grumpy they don't get the same ;) Wishing you a speedy recovery with plenty of reading and researching*!*

Oh Julie,
So sorry. Sending prayers and extra long hugs.Hope you have some meds to keep you from hurting too much.
xx

Very sorry to hear that. I totally can relate to the "disillusionment" of Doctors anymore. I have had my own BAD experiences and my family has been having their own up in Iowa right now with my Step Father.
Ugh!!

Just try to relax and take a few days off and keep off your leg.
I will send you an e-mail soon.
Hang in there.....
Joyce

I'm so sorry that you're in so much pain, it's a shame that your doctor had such a poor bedside manner. Take care of yourself and rest and I hope it mends very soon.

Sorry to hear about your knee. Stay off of it as much as you can & try to get better soon!

Oh, your poor knee! So sorry you're going through this. I hope it heals up quicker than quick.

Oh Julie! I'm so sorry you're hurting! Rest up so you feel better soon! **hugs**

Isn't that the truth about vets vs doctors! Very sad ...

I do hope your knee gets better real soon..

Hope your knee is better soon.
I do love the art work you post :-)

I am so sorry you are hurt...just rest. I have also been to the Doc in the box, not my first choice, but sometimes we have no choice.
I hope this has found you improved.
Be well friend, spring is coming. I hope! Love, Mary

Hope so much that you are feeling better and getting about again Julie. Sounds like you really got stuck with a poor excuse for a doctor - they can be so self-centered and uppity at times, seem to have forgotten that Hippocratic Oath they took!!

Oh no Julie. How terrible for you. I hope your recovery is swift and hassle-free and you don't miss too much work time.

So sorry about your knee hope it's better soon (I've wandered over from Leanne's blog).

hola!
I love your blog ^^
I like the Celtic culture, in addition the rococo, the Victorian era, the Renaissance, all the old European culture in general ^^
I like Celtic and Classical music too ^^
and I like fairies ^^
we have many tastes in common ^^
forgive the bad spelling u.u
I am just learning English ...
I'm sorry what happened to your knee u.u
Forgive my audacity
^^ chao
Nice to meet you ^^

Lila coming by again! I have access to a computer...Steve being at work and I have a day off!

ANd the vet would have given you a cookie too! I am way past due on catching! I am SO sorry to hear about your knee and the awful doctor!! Hugs