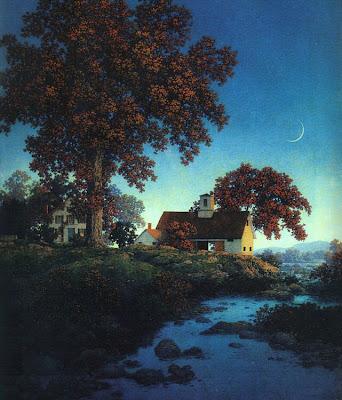 I follow the old meaning of new moon, which is "the first appearance of the waxing crescent moon". (In astronomy today, "new moon" means "dark moon", when the moon is invisible.)

Following are some poems whose authors, like me, followed the old meaning by celebrating that first sliver of moon as it reappears in the sky:


The new moon, of no importance
lingers behind as the yellow sun glares
and is gone beyond the sea's edge;
earth smokes blue;
the new moon, in cool height above the blushes,
brings a fresh fragrance of heaven to our senses.


I saw the new moon late yestreen,
Wi' the auld moon in her arms:
And if ye gang to sea, maister,
I fear we'll suffer harm.

What have you got in your knapsack fair,
White moon, bright moon, pearling the air,
Spinning your bobbins and fabrics free,
Fleet moon, sweet moon, in to the sea?
Turquoise and beryl and rings of gold,
Clear moon, dear moon, ne’er to be sold?
Roses and lilies, romance and love,
Still moon, chill moon, swinging above?
Slender your feet as a white birds throat,
High moon, shy moon, drifting your boat
Into the murk of the world awhile,
Slim moon, dim moon, adding a smile.
Tender your eyes as a maiden’s kiss,
Fine moon, wine moon, no one knows this,
Under the spell of your witchery,
Dream moon, cream moon, first he kissed me.

Here's a favorite from my childhood (and that's how Mr. Lindsay spelled cookie!)

The MOON'S THE NORTH WIND'S COOKY

And here's a new moon poem by one of my favorite poets:


Day, you have bruised and beaten me,
As rain beats down the bright, proud sea,
Beaten my body, bruised my soul,
Left me nothing lovely or whole —
Yet I have wrested a gift from you,
Day that dies in dusky blue:

For suddenly over the factories
I saw a moon in the cloudy seas —
A wisp of beauty all alone
In a world as hard and gray as stone —
Oh who could be bitter and want to die
When a maiden moon wakes up in the sky?

When I see the first New moon,
faint in the twilight,
I think of the moth eyebrows
Of a girl I saw only once.

The winner of my Two-Year Blogiversary celebration is Lynda from "Among the Hedgerows " in Ontario. Congratulations, Lynda! I will be contacting you.
Posted by Julie at 8:33 AM

Oh such lovely poems - I am going to have to learn a few of them and teach them to our grandsons. We love poetry when said in unison - and when said separately - and when thought about - we just love poetry.

And congratulations to Lynda - I love her blog too.

All of the poetry was all great. I couldn't decide if I liked any one better than the others. It is auspicious to start new projects on the new moon.(Something I learned from Daisy)I have a good project in mind.
:-)

The poems are lovely ... now if only the cloud would clear so we could see the beautiful new moon!

I am a moon girl...this was lovely and I learned once more from you my friend.
I started putting Ruth on my blog...It will be seen easier.
We have been under a inversion for almost 3 weeks...with snow. It is snowing right now. So I haven't seen the Moon. Yesterday we saw the sun for a few hours and today not so much.
Big Hugs, Mary

I so enjoyed reading those lovely poems...I can just imagine reciting them while looking up in the sky at the new moon!

Congratulations to your giveaway winner:-)

Hope all is well with you, I'm still hibernating! lol xoxo

Congratulations on your two-year blogiversary dear Julie - you have certainly brought a lot of beauty to the blogosphere!!

I missed the giveaway but congratulate sweet Lynda on her win - she's another lovely friend.

Hugs - and thanks for your friendship.
Mary.

Lovely - just lovely -I love the poems you are introducing me to- I need to print them out and into a book they will go - thank you for this lovely gift :-)

I always feel a blip of hope with the New Moon.

Love these moon poems. Thanx for posting them. Congrats on your Celtic listing w/Best! xoxoxo

There was a very pretty sliver of a moon that night wasn't there?
Congrats on your blogaversary.....HA!
Joyce

What a lovely post. I love anything moon related. The Maxfield Parrish painting is beautiful. I feel I could walk right into it. Also love the Sara Teasdale poem. As always, you have brought a bit of beauty to an otherwise cold and dreary day.