MY SACRED LIFE: THE RIVER 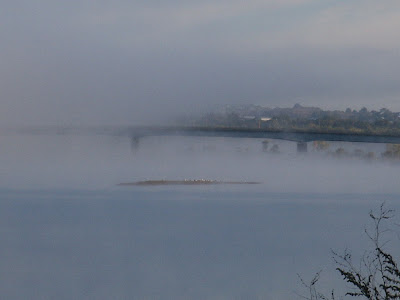 (This photo is REALLY cool when enlarged. Just click on it.
You'll even see the birds on the sandbar!)
What is this place, emerging out of the mists? Is it is the enchanted Isle of Avalon, home of the priestesses of the ancient goddess? Is it Brigadoon, the Scottish town which is visible only one day every one hundred years? No, it's Bismarck! But today it appeared enchanted.

When I left home this morning the sky was morning-glory blue. As I drove west, I couldn't believe my eyes. Was that fog I saw a few blocks ahead? Indeed it was. By the time I reached the river's edge, I was enveloped in fog. Emerging from the mists which shrouded them were the construction crane for the new bridge and the beautiful lacy ironwork of the old bridge. (The photo above shows yet another bridge - to the south of the one I drive across every day).

As soon as we got to the Mandan side of the river, the fog was gone, instantly! When I reached my office a few minutes later, I looked out my second-floor window toward the river. A dark grey ribbon of fog followed the river's course. Fifteen minutes later, and the fog had turned pure white, but still clearly delineated the river's path. By 9:00, the spectacle was gone.

In recent days, the Missouri has looked so serene and calm as I cross it. It's hard to believe that underneath its surface it is shifting sandbars, eroding banks, and moving hundreds of thousand of gallons of water in its quest to meet the Mississippi River and eventually drain into the Gulf of Mexico.

A mighty dam holds back the river at Garrison, about 50 miles north of Bismarck. We folks upstream, the Montanas and Dakotans, want the river levels to be high here. When they are down, recreation suffers, and our states need the recreation revenue. (And our residents deserve to enjoy their lakes and rivers.) The U. S. Corps of Engineers has a different idea for this river. They have lowered the water level here so that it will be high down south, for barge traffic.

I am not going to get into this argument at the moment. And the Mighty Mo, in the long run, doesn't care. It just keeps on a-rollin' toward the sea, and it will do so long after we are gone. But today it showed me part of my sacred life.
Posted by Julie at 6:07 PM

Fog is always so mystical to me. I rather enjoy it. You painted a wonderful picture with your words. I felt as if I was there with you.

sometimes, Mother Nature sends us magickal gifts - and this is one of them. Oh yes, people will explain it away.. with their silly sensibilities but deep in your very soul, you know that it was meant for you - to remind you of times past and to stir your soul xoox
of course it is Avalon - what else could it be??

I love this photo!
It is full of mystery and promise.
It could have been taken at any of the places you mention as it has a mood all it's own.