THE LAST DAY OF SUMMER

Yesterday, my book club friends and I celebrated the last day of summer by driving to Dickinson. What, you might ask, would entice us to travel 90 miles to this small North Dakota city with few attractions besides a very good dinosaur museum (southwestern North Dakota is excellent dinosaur fossil country).

One of our members moved to Dickinson some years ago, and we drive out every September to see her. The day always includes lunch at a local restaurant, some shopping, visiting with dessert and coffee at her home, and of course, discussing the book. Dickinson actually has several nice shops, including one called "The Village", which is far nicer than any home decor/gift shop in Bismarck.

It was a beautiful day, and I think the best part of it was the drive there and back. Although I followed the conversation of my fellow travelers, and joined in from time to time, for the most part I was content to gaze out the windows and note the subtleties in the scenery. 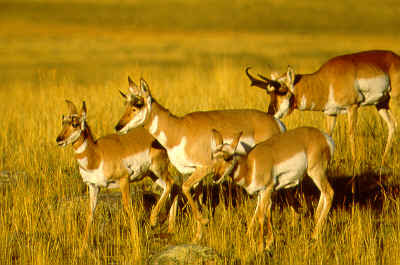 Hundreds of thousands of cars follow our route, it being Interstate Highway 94. I am sure that for most of those drivers, North Dakota is flat and boring. They put the pedal to metal, hurrying to see real scenery in Montana. But I - and my fellow passengers - found beauty in this warm turn-of-the-seasons day.
Many of trees have now changed color, just a week after I reported here in this blog that parts of trees but not entire trees had turned. A small stand of trees (yes, the prairie has trees) in a coulee was a mix of green, yellow and red, breathtaking when paired with a red barn in the background. The yellows, golds and light oranges of cottonwoods against gently rounded hills was our backdrop to the south. To the north were prairie potholes with deep indigo coloration at the centers and lighter blue at the shorelines.
The crops have been harvested, except for the sunflowers and the corn. I was amazed to see miniature sunflowers, and actually had to ask what "those yellow flowers" were. The corn is no longer green, but beige. One harvested field still bore the colors of its crops - strips of green alternating with tan. I am a North Dakota girl but I am not a farm girl. I can't tell wheat from barley even when they're ripe, and I can't ever recall seeing different crops planted in stripes across a field.
I remember thinking to myself that I would need to use a thesaurus to describe the various colors I saw. The prairie grasses had turned as well, and covered the gamut from rust to russet to brown, tawny, ochre, bronze, auburn, cinnamon, fawn. Were the leaves on those bushes in the ditches red, or were they vermilion, scarlet, maroon, or crimson? I settled on vermilion.
Did the drivers in the cars breaking the speed limit see the small herd of pronghorn antelope that we spotted? Did they notice the subtle difference in the hay bales? Bales in the fields are covered with plastic wrappers, while bales in the ditches are left bare.
Do the truckers rushing to deliver their loads note that there are many different kinds of buttes? There are ones with rock outcroppings on the top, little ones that look like miniature volcanoes, ones containing rosy red scoria, and the stair-stepped butte near New Salem whose bottom step is home to Salem Sue.
Salem Sue (or New Salem Sue), by the way, is the world's largest fiberglass Holstein cow. Located at New Salem, a little town 30 miles from Bismarck, Salem Sue is near the beginning of our trip. Near the end of the trip is a highway exit featuring "Geese in Flight", the world's largest scrap metal sculpture. "Geese" marks the turnoff for the 32-mile Enchanted Highway of metal sculptures - jumping deer, fish, Teddy Roosevelt, the Tin Family, grasshoppers, pheasants. It's a fun little side trip, if one has time. 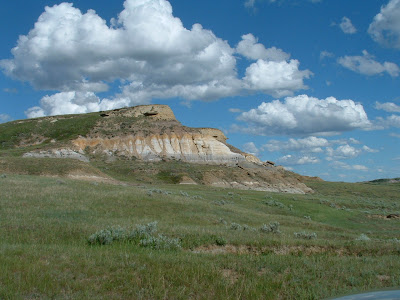 Our group has always meant to take another side trip, to tour the beautiful Assumption Abbey at Richardton, and to visit the monks' bluebird trail. As it was, we didn't leave Dickinson until 6 p.m. By 7:30 p.m., we were nearing home, and long soft blue shadows began to cross the land. We didn't do it this time, but usually at this point one of us begins to sing "North Dakota" and the others join in: "You oughta go ta, North Dakota, see the cattle and the wheat, and the folks that can't be beat. You say hello ta, North Dakota, and you just can't say goodbye. The skies are bluer than blue, the sun is sunnier too, and if you don't believe it then there's only one thing to do (repeat from beginning)."
And as I arrived home I saw, peeking over my front fence, the last pink rose of summer. 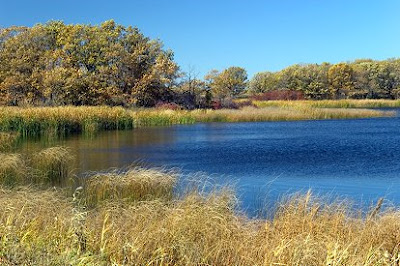 What I wouldn't give to have a cabin out there!

Oh your areas both sounds and looks beautiful. I love the way you described the changing colors!. We still have boring green here. Our leaves wont change for at lest another month.

I could sit near that big rocky outcrop and just ground. Amazing - no, wait, not amazing - a gift, that's what it is - Our Mother Earth gives us gifts each day, some of us see them, some of us don't.
If I were you, I would be pleased that the tourists bypass your gorgeous state..

You could be a one-woman advertisement for ND!! But are you sure you want all those people to discover your beautiful spot on earth?! Sounds heavenly to me.