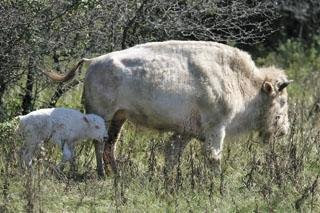 North Dakota has a possible second albino buffalo (actually bison), an extremely rare occurrence. The white calf was first spotted with its mother, "White Cloud" over Labor Day weekend. White buffalo are sacred to the Lakota, or Sioux, Indians.

The following is the newspaper article on the calf, copied from the Grand Forks (ND) Herald:

White Cloud, the albino bison that has been a tourist attraction here for 11 years, has given birth to a calf that could be a rare albino as well.

Bob Mountain, the treasurer of the board of Jamestown's National Buffalo Museum, said White Cloud and her calf were spotted for the first time Saturday. The calf was believed to have been born late Friday night. Officials said they did not know whether it is a male or female.

"It has a pink nose and ears, so I think it's an albino," Mountain said. "But it will be awhile before we know for sure."

White Cloud is a DNA-tested albino bison. The calf was her fifth since she joined the Jamestown museum herd 11 years ago.

Officials say the odds of a white calf being born are extremely rare. Many bison born white eventually turn brown.

"The problem is, there's nothing to compare it to," Mountain said.

The odds of White Cloud giving birth to an albino bison are considerably better than normal, however, Mountain said, because she was bred back to her only bull calf, Dakota Thunder. The process called line breeding gave her a 50-50 chance she would have a white calf, he said.
"You line breed for certain traits," he said.

Daniel and Jean Shirek, of the northeastern North Dakota town of Michigan, own White Cloud and lease her to the buffalo museum. The Shireks also are joint owners of the new calf with the museum.

"It took us by surprise, and we think it's wonderful," Daniel Shirek said. He planned to come to Jamestown to see the calf and discuss DNA testing with museum board members.

"We'll do whatever they want to do," he said.

The white buffalo is sacred to most Plains Indian tribes and is often seen as a sign of great changes in the world. To some tribes it is a blessing. Others believe it is a sign of peace, prosperity, unity and hope.

The birth of a white calf is a boost for tourism in Jamestown, said Buffalo City Tourism Director Nina Sneider.

"White Cloud has been a tremendous draw for the last 11 years, and I'd guess we'll have even more visitors now," Sneider said. "We get visitors, even in the dead of winter, who want to see her."

Sneider said it doesn't matter whether the calf is an albino or was just born with a white hide; it's still a rarity. Part of the Lakota legend speaks of the white buffalo changing to a brown one as it walked, she said.

"So, it's in keeping with the legend and, spiritually, makes the calf precious to them," she said.

**********
When I go to my Woman Song Retreat this weekend, I'll be turning south right at Jamestown (which is about 90 miles east of Bismarck). It would be fantastic if I could see White Cloud and her calf. That would really make my trip special.

In the post below I have reprinted the Legend of the White Buffalo Calf Woman.
Posted by Julie at 5:19 PM

Oh that is so cool that there is a baby now. I would love to see that buffalo. I had read the article about the Sioux and the buffalo before, but had not seen it in a long time so thanks for re-posing it (your privious post)
If you do get a chance to see the baby PLEASE take some photos.

Have the best time in your retreat!!!
I have been doing my research (and saving money) to go to one real soon hopefully, cross fingers ;-)

Enjoy yours!!! I will be thinking of you and waiting to hear of your experience.

Although there are great changes in the earth I would like to think of this baby as a sign of peace prosperity unity and hope!! We all need some hope!
I do wish you a wonderful time at the retreat and hope you do see baby bison!!

My rose photos taken yesterday!! I am really enjoying them! hugs NG