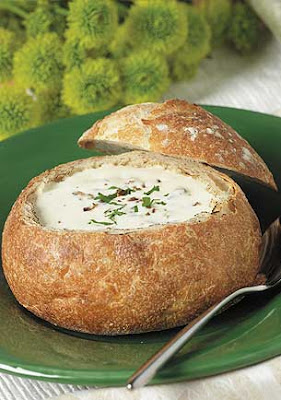 I love soup - but nothing beats my nan's Beef & barley soup!
I had cheese soup in a bread bowl when I was in Pennsylvania a few years ago and it was delicious.. yes, nothing like a yummy soup on a cold day!

I'm starving now after reading this wonderful post! It was really fun to see your 'soup' history unfold. My dad's idea of chicken soup was to boil the heck out of a stewing hen and throw in a carrot or two. We traditionally made clam chowder on Christmas Eve but tomato soup & grilled cheese rules! I found Poland's Best brand of condensed soups at Cubthat are tasty -- Buckwheat & Bean.
Thanks for sharing!

Now you've got me hungry for soup!! I remember when we were kids, mom would make us Campbell's Tomato soup and would add crushed soda crackers to it while it was cooking so that it was nice and thick and very filling. She would also use milk instead of water. To this day I still love it that way. I won't eat cold soups...to me, it has to be hot or it's not a soup! lol I'm really not a big eater of soup but give me a bowl of chili and I'll be happy!! xox

I'm afraid my creativity comes out in my soup making too! I seldom make any soup the same way twice.
I love to eat soup in Thai restaurants...usually they use a chicken broth and coconut milk base!
My grandmother made homemade noodles using cream and egg yolks! I remember her rolling them out, cutting into ribbons and drying a bit before they went into the soup!
Delicious!!!

Make your own onion soup-slice 4 large onions to taste--saute in a stick of real butter till ready... pour in 1 can Campbells beef consume, 1 can boullion...simmer to reduce...a dash of sherry is optional...devine with garnish of cheese etc