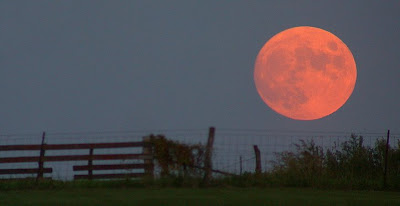 The Harvest Moon is the full moon nearest the autumnal equinox, which occurred here Sunday. Tomorrow evening, we'll see this yellow-orange orb floating near the horizon. The moon has fascinated mankind since time began, but is there anything so mesmerizing as the Harvest Moon? It appears bigger, brighter and more colorful than other full moons.

The brightness of the Harvest Moon is an illusion. Wikipedia gives an excellent explanation: "The yellow or golden or orangish or reddish color of the moon shortly after it rises is a physical effect, which stems from the fact that, when the moon is low in the sky, you are looking at it through a greater amount of atmosphere than when the moon is overhead. The atmosphere scatters the bluish component of white moonlight (which is really reflected sunlight) but allows the reddish component of the light to travel a straighter path to your eyes."

I hope I didn't destroy your romantic illusions about the Harvest Moon with this scientific explanation! This also happens to a lesser extent with the next full moon, The Hunter's Moon.

Our eyes actually do see the low-hanging Harvest Moon as being larger than ones that ride high in the sky. This is known as Moon Illusion. I'm not even going to begin to try to explain or understand this visual or optic illusion.

In addition to color and size, the Harvest Moon is special in another way. At this time of the year, it rises about the same time the sun sets, but more important, instead of rising its normal average of 50 minutes later each night, the moon seems to rise at nearly the same time each night. The extra light these evenings gives the farmers hurrying to finish their harvest added time to work their fields. Hence the name "Harvest Moon." In some years, the Harvest Moon occurs in October.

By the way, I misquoted the lyrics to "Shine On Harvest Moon" in an earlier post. Here is the song as it is supposed to be:

(By Norah Bayes and Jack Norworth)

"Shine on, shine on Harvest Moon, up in the sky

I ain't had no lovin' since January, February, June or July.

Snow time ain't no time to stay outdoors and spoon,

So shine on, shine on Harvest Moon, for me and my gal."

I wish I could take credit for these amazing photos, but I can't. I found them on the Internet. I think the last one was digitally enhanced.

Spectacular photos of the moon! You didn't destroy any of my romantic illusions....I still think the moon is made of cheese!

Oh my, these are beautiful images. Thank you for sharing them. I remember the first harvest moon I saw as a girl. It actually frightened me, because I'd never seen the moon that color before. Now I sit in awe of it, when it appears, and just enjoy it.

Julie - dh and I went outside to view the moon this evening - it was spectacular but WHITE as could be here. You got the harvest version, ours was made of goat cheese I believe!!

How did you get those amazing photos? What kind of camera do you use? Just beautiful.

Thank you for all your kind comments - I really do appreciate them.
Hugs - Mary.

I surely wish those photos were mine but they aren't. I found them on the Internet.

We didn't see the moon at all tonight. I am hoping for tomorrow night.

those photos are stunning Julie! I was going to ask if you took them, but i saw your reply to Mary! they are fab though! Our full moon is tonight, but I was out there taking a few pics last night, and will try to get some tonight as well. I am lucky that she shines right outside my bedroom window, and fills my room with a beautiful silver glow. I had the curtains open again last night and she shone so magically right into my room.

Illusion or not, the Harvest Moon is always such a beautiful sight to see:-) It was interesting to learn why it's called a "harvest" moon...makes sense now! lol xox

I'm with Janet...I still think the moon is made of cheese, too!

You beat me, with a Full Moon entry! :-) And you also have a lot more info here, than I do.

Beautiful photos.
The moon will always be romantic to me :-)

I saw the moon for a moment last night when the clouds broke apart for awhile! I love to see the moonlight reflected on the edges of the clouds!

I was pleased to read this after the comment I left 2 days ago. It's good to know my memory was correct. It seems many years since I saw a Moon like this however. I must make an effort to go and look this evening.

Lovely photos of the moon.

Julie, Julie, Julie - please don't go searching the internet for scientific facts about the moon... She is a Goddess as we all are - silly scientific men, they know nothing ! love you lots xo

Dearest Julie...I just read through your recent posts. Thank you so much for all the honor you have given to the order in the universe. Loved these posts! Beautiful words and art. The thoughts on the moon, the seasons change, the Druids...your art and the 15 y/o who lives in your heart!
xx

Hi Julie Marie:-) Can you please email me your home address? I need it for the Halloween Swap, thank you!! My email is carole_57@hotmail.com

Julie thanks for all the comments you just left for me on my blog, I have answered the questions ;-0

These images are wonderful particularly the last! still feeling sore... need a diversion..I am sure that I missed seeing this in person..
hugging gently NG

Gorgeous Julie, the last one especially. I've seen it somewhere else too. Do you hve the credit for it. If there are other's similar, I'd love to see them.

Hi Julie, you know I love hearing and seeing anything about the moon Smiles *!*