THE FIRST DAY OF AUTUMN 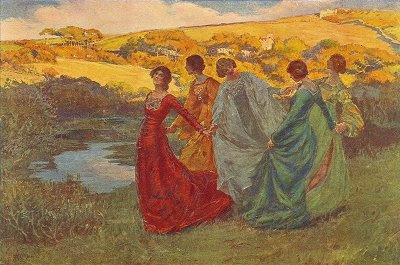 By Elizabeth Stanhope Forbes
**********
Today was the first day of autumn in the United States. Although it is celebrated and shown on the calendar on dates ranging from September 20 through September 23, the date in a particular area is based on the actual astronomical event. The first day of fall, or Autumn Equinox. occurs when the sun crosses the equator on its journey southward. Due to the the fact that the earth wobbles on its axis slightly, the date may vary by a few days depending on the year. For us in the central time zone of the United States, it occurred at 4:51 a.m. today.
The first day of autumn is also known as Alban Elfed, Cornucopia, Feast of Avilon (Avalon, possibly?), Festival of Dionysus, Day of the Aspen, Harvest Home, Harvest Tide, Mabon, Night of the Hunter, Second Harvest Festival, Wine Harvest, the Feast of Ingathering and Witch's Thanksgiving.
It is, simply, the second day of each year in which the day and night are of equal length, the other day of course being the spring, or vernal, equinox in March.
It is called the The Feast of Dionysus or Wine Festival because this is the time when grapes are harvested from the arbors and put away to become wine. It is called Harvest Tide because this is the time of the great tides. (Living in landlocked North Dakota, I have no idea of this is correct or not.)
Mabon is the term used by some Wiccans and Neopagans, and it's one of their minor
holidays. The name may derive from Mabon ap Modron, a character from Welsh mythology. In Pastoral England, it was also the Second Harvest Festival (the first being Lammas.)
The full moon closest to the autumn equinox is known as The Harvest Moon, and farmers would harvest their crops by the light of the moon. I remember driving with my family from Crosby to Larson at night, the huge orange Harvest Moon low to the horizon. We all would sing, "Shine on, shine on Harvest Moon, up in the sky, keep on shining, January, February, June and July."
Interestingly, I learned that Mabon is not an authentic ancient festival. The name Mabon has only been applied very recently, the term being invented in the 1970s. Previously simply called the autumn equinox, the event was re-named to impart a more authentic-sounding "Celtic" feel, since all the other festivals either had names deriving from genuine tradition, or had had names given to them. The use of the name is much more prevalent in America, with many British Neopagans being dismissive of it "as an unauthentic name with not even a glimmer of connection to any seasonal lore."
Alban Elfed (Elved/Elvid) is the Celtic and Druidic name for this holiday, the counterpart to Alban Eiler (Spring Equinox), which I wrote about in a post in March. "At this time, our ancestors saw the Lady who is the Spirit of the Land stand before her people with the full bounty of her harvest. Here is the reward of labour and perseverance of the Land. This is the fulfilled promise of the days of spring and summer. This is The Reckoning of the Year, for Harvest is now complete and the portions are set to feed folk and animals through the cold dark days that lay ahead. This is a time of wonder and gratitude for the gifts the Lady showers down upon her people." In short, it is the original celebration of Thanksgiving.
As I mentioned before, one of the names for this celebration is Harvest Home. I read Thomas Tryon's delightfully creepy "Harvest Home" years ago. Fortunately, the website "The Witches' Inn" reassures us: "Despite the publicity generated by Thomas Tryon's novel, Harvest Home is the pleasantest of holidays. Admitted, it does involve the concept of sacrifice, but one that is symbolic only. The sacrifice is that of the spirit of vegetation, John Barleycorn.
This spirit - also known as the Spirit of the Fields and The Spirit of The Barley, was believed to reside most especially in the last sheaf or shock of barley harvested. The sheaf was dressed fine clothes, or woven into a wicker-like. man-shaped form (hence the term The Wicker Man). This effigy was then cut and carried away from the field and usually burned, among much rejoicing.
This annual mock sacrifice may have been the origin of the misconception - a rumor started by Julius Caesar when the Romans were messing about Britain - that Druids made human sacrifices. In fact, there is not one single eyewitness account of a human sacrifice performed by Druids in all of history.
~~~~~~~~~~~~~~~~~~~~~~~~~~~~~~~~~~~~~~~~~~~~~~~~~~~~~~~~~~~
The next post will be my 200th post. Time for an autumnal/Halloween celebration. Make a comment on that post and you will be entered in my giftaway. It doesn't matter if you live outside the US. Please stop by and enter this celebration of one of my favorite times of year!
Posted by Julie at 6:12 PM

Happy Autumn dear Julie Marie:-) This was such an interesting post...many facts I didn't know about this time of year. I'm glad to hear that the Druids never did make human sacrifices...Julius Caesar has a lot to answer for doesn't he!! xox

blessings of the Equinox to you dear Julie xoxo

I love reading these details about Autumn, my favourite season. I too remember Thomas Tryon's Harvest Home. That was about 30 years ago!
I love the Harvest moon, and remember some spectacular ones when I was a girl in England. Huge and orange and seeming to fill the sky.
I realize I was just a kid, and they probably just seemed that way, but I cherish the memory and will hold on to it..
hugs
xx

Fall has always been my favorite time of year, and you've added so many great bits of info that I didn't know about. I also read Thomas Tryon's Harvest Home many years ago.

Wow! Thanks for all the interesting info. I love Autumn ~ it's my favorite time of year.

Happy Autumn to you, Julie Marie!!!

Congratulations on approaching your 200th post!!!!
Thanks for the information about the Equinox. However, I just can't deal with things that "shift" so I always just call the 21st of September the Equinox...LOL! For me, all the Solstices and Equinoxes have to be on the 21st of the month...its bad enough that Easter moves around!!! (Am I getting old and crotchety???)
I do know we have wine festivals around here in September....grape harvest being in August and it takes a few weeks to make wine! the festivals are lots of fun...even if they do have the "chicken" dance!

That was a really interesting post julie Marie! thank you.

Autumn Equinox blessings to you from very windy Somerset, UK!