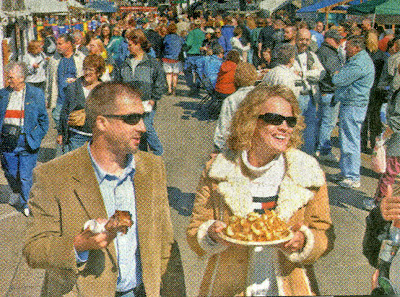 Two perennial favorites at Bismarck's Folkfest Street Fair - Turkey Drumsticks and Funnel Cakes (this Bismarck Tribune photo was taken Friday - no jackets were needed Saturday!
**********
Saturday was what my husband calls a Bluebird Day - a warm fall day with blue skies. Thursday and Friday had been unseasonably cold, and my right hand completely swelled up with an acute attack of what I like to call rheumatism. Dan, a former physician's assistant, says it is arthritis, plain and simple, and it know it really is. But I prefer what the old folks called it, "the rheumatiz", and I definitely felt like one of the old folks last week.
But Saturday dawned blue and mellow, with leaves just beginning to turn. Not entire trees yet - but portions of trees - are starting to show color. I was so glad it would be nice, because my sister and I were set to attend the Folkfest Downtowners' Street Fair that afternoon.
Glad, because I have vivid memories of shivering under grey skies while trying to eat a fleischkeuchle (German deep fried meat pie) during Oktoberfest. Bismarck's fall celebration used go by that name and was held a a month later, so as to celebrate the German heritage so strong in our area. But some years ago - in hopes of generally better weather - the celebration was moved to the third weekend of September and re-named to encompass a wider group of people.
Oktoberfest used to be little more than some local bars putting picnic tables in their parking lots and serving fleischkuechle, brats and kraut, knoephle soup and kuchen. Now, a large area of downtown Bismarck is roped off from auto traffic, and hundreds of food and craft booths dot the streets.
I used to go mainly for the crafts, but after 25 years nothing much is new. Now, we go mainly for the food, and I suspect a lot of other people do too (the men, for sure). Whatever you are hungry for you'll find it at the street fair: soup in a bread bowl, Indian tacos, gyros, buffalo burgers (they're good!), cheese curds, fry bread, satay (skewered beef in spicy peanut sauce), Chinese food, deep-fried walleye, Norwegian lefse, I could go on and on. It always made me chuckle to see my petite, extremely picky daughter chow down on a turkey drumstick like there was no tomorrow!
The only thing I regret about leaving my previous job is that my friends and I could go right out the front door of the Wells Fargo Bank building on Folkfest Fridays and immediately be in the midst of food heaven. We used our morning and afternoon coffee breaks to go scout out and bring back fresh raspberries on ice cream, mini donuts, kettle corn, cheesecake on a stick, caramel apple slices.
Yesterday, my sister and I followed our usual agenda - cover the entire fair, check out all the food and craft booths, then decide which foods we'd like to go back for, and secure two places among the crowded tables (this year, a table in the shade was a must). Oh, it was hard, especially as I had left most of my cash in a bank envelope on the seat of my car and I had to be very choosy.
I finally settled on a grilled pork chop sandwich, a bread bowl of chicken tortilla soup and a freshly-squeezed lemonade. My sister chose Chinese stir fry and rice, and an ice cream brownie sandwich. After we ate, we lingered at the table for the best part of the day: people- and dog-watching. I have never been able to figure out why people bring their dogs to a crowded street fair, but they were there, along with cute babies, excited kids, men bearing big plates of food, ladies carrying bags with fall crafts peeking out, teenagers having a good time but hardly deigning to show it, and the lovable eccentrics.
After we left, we went to Starbucks, as my sister had been shut out in her attempts to buy a frappuchino at the Starbucks' and other coffee booths downtown. We took our drinks outside to the patio, unwilling to end a perfect day. We sat under the tree and watched the world drive by, both on South Third Street and in the Starbucks drive through. More people watching!
As an added bonus, Glori drove me out to her house in Lincoln, five miles outside of Bismarck, to see her seven new kittens. She assures me at least one has my name on it, if I could get Penny and Gracie to accept it. There's an all-black little sweetheart named Stevie . . .We got our beloved Dusty the day before Halloween when Kristen was five years old. Now, it's 20 years later and Dusty has passed after 18 1/2 wonderful years. Maybe I could have another Halloween kitty in my house?
Posted by Julie at 4:35 PM

Your day sounds lovely! We have a local Harvest Festival here which is always the weekend after the State Fair ends (which is always) on Labor Day) and an Apple Festival south of here. Unfortunately, those things were out of the question this year, due to Martin's health problems. We are hoping things will be better next year.

Your talk of kittens gave me a happy yet sad feeling. I still don't foresee any new kitties coming into our lives. As an early birthday present Martin gave me a coffee mug with my favorite picture of Meggie on it. I cried when I opened it. I have it on my desk at work where I can look at it throughout the day.

Off to find something to eat. Your description of all the yummy food has made me hungry!

Hi Julie, Inkie, my black cat thinks it would be very wise of you to give little Stevie a home *!* Sounds like you and your sister had a wonderful day at the Folkfest, I like your husband's Bluebird Day description, hope the rheumatiz is easing a little

What a lovely street fair day!
Re: Stevie, perfect for Halloween! And I just mentioned our black cat in my post tonight!

is that you and your husband in the photo???
my nan use to call it 'rheumy' - she use to say 'I've got the rheumy'... lord, I was scared of catching it.. so, what do you do for your arthritis? I have lots of folk remedies :)

Nope, Robyn, that's not us in the photo. We are much older than that!

My "rheumatiz" is somewhat better. I can make a fist today, and I can see my knuckles re-emerging as the puffiness abates.