Have you ever been obsessed by someone or some thing? I can't say that I have, until just this past October. I spent nearly the entire month under the spell of searching for my ancestors.

I have been bitten hard by the ancestry bug, and it IS a sickness. It all came about because of two things. Dan's nephew Erik took out a trial membership on ancestry.com this summer and was able to fill in some key information on his tree, which is also in part his Uncle Dan's tree. Then, serendipitously, I heard from a distant relative of Dan's whom I had not been in contact with for years. She and her sisters are the tracers of the Sudie Sheppard line (Dan's paternal grandmother).

Seeing both their trees inspired me to take out a trial membership too. I have mentioned before that I have been lucky in the genealogy department. My cousin Kevin is searching the Norwegian Wangen line of our maternal grandmother. My second cousin Shirley from Scotland is searching the Munro line of Highlanders. I have a second cousin from Iowa who is tracing the Rockney/Cody line of my father.

Although the Rockney line goes way back to the 1600s in Norway, the Cody line stops abruptly with Bridget and John Cody, born in the 1830s in Ireland. But I thought I would try my paternal great-grandmother's line and see if it would take me anywhere.

It finally got to the point that instead of being extremely excited to see those wavy green leaves (ancestry.com's clues to familial links), I became dismayed. I was actually happy when some lines ended early. Ultimately, I realized  that it would be taking me far, far longer than a month.

I did a little math on my own and then looked up the info online to confirm my calculations. After just 20 generations, we have 1,048,560 ancestors. If you don't believe me, look at this:

Of course, you don't have that many identifiable ancestors. Thank god. And of course, this number doesn't mean you have that many unique ancestors in.  What is happening is repetition of ancestors, that is, the same ancestors appearing over and over again in a pedigree.  Repetition seldom appears within the first ten generations, but the further back you go, the more repetition you are likely to find.

The same evening I discovered the above chart, I decided the madness had to stop. I had to get my regular life back. I had to start reading again, and I did  (I have another five books under my belt now.)

This is going to be a lifetime job - and too bad I didn't start in on it earlier. Because not only do I have to (NEED to) list all the names I can, I must now go back and fill in the blanks that made these ancestors interesting people.

I have decided that I can afford to purchase 6-month ancestry.com packages at only $12.95 a month. I don't go to movies or rent movies, Dan and I don't dine out, I buy my clothing at thrift shops, I drive an old car. I can justify this one expense, for I believe this will be a satisfying hobby for the rest of my life.


And PS, I have already discovered some very interesting people so far. Know this fella? 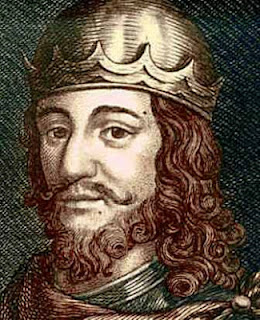 ﻿
If so, you know how shocked and amazed I was to find him at the end (so far) of one of my Great-Grandmother Malinda's lines.
Posted by Julie at 9:53 PM

Ancestry can be quite addicting. I had the same thing happen to me several years ago. Have you been to 'Find a Grave' yet? That's quite a site as well. I love being able to place virtual flowers on my ancestor's graves.
Mary

Hi Julie
I know exactly what you mean, it IS addictive!
I now fall in and out of searching, but as I try to do it on free sites it's maybe not as easy anyway. When I'm REALLY stuck I try and get copy birth/marriage/death certificates to get the generation before, but that is an expensive game.

You made me laugh about Dan's 'weird' shows - I watch them all!

Welcome to this wonderful addiction. It's time well spent. I "began" my genealogy searches 40 years, ago. With no computer or Ancestry available, I questioned everyone, spent hours in libraries, wrote countless letters, traveled to search original records and to retrace footsteps. It has been immensely rewarding. I'm surrounded by notebooks, letters, records and certificates. Congrats on your joining this fascinating "obsession". It never ends.