MY CELTIC GUARDIAN ANGEL TO THE RESCUE AGAIN 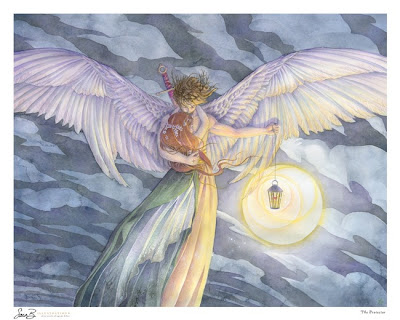 "The Guardian", by Sarah Butcher-Burrier

This painting speaks to me a great deal. The woman of golden brown hair and dress of typical green, being comforted once again by her Celtic guardian/warrior angel, is me. He has been my life-saving guardian angel several times, like the occasion when I escaped death from a water-filled, sinking car, and again, ﻿when I miraculously escaped what seemed to be a certain head-on collision at an intersection.

The first occasion, I merely thought, "That was a close call." (I was young then.) The second time, I consciously realized that something or someone had PREVENTED that accident. I had seen the crash coming, mere seconds from collision, and then all of a sudden, I was on the other side, myself and my car totally unscathed. 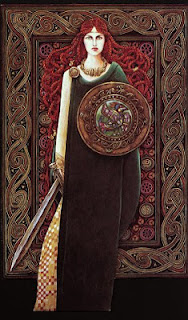 My angel has been, at other times, the fierce she-warrior with the long Celtic broadsword, instilling courage in me, such as when I confronted a bully of a boss. He/she has prevented me from physically harming another person. Guardian angels have saved my daughter's life several times over.

The angel craze, you may remember, really caught fire in the 90s, with the publication of many books on the subject. I was so proud that I, as a reporter at the Bismarck Tribune, wrote a story on angels a week or two BEFORE Newsweek and Time published their angel editions. In my story, I interviewed Sophie Burnham, whose book, "Angel Letters", had just come out.

But more importantly, I interviewed several North Dakota people whose had seen or felt the presence of angels. One lady, in fact, had been one of the letter writers in Burnham's "Angel Letters". She told of seeing guardian angels surrounding her dying grandmother's body. Another man told of being prevented from entering a certain room by an unseen hand when he was a soldier fighting overseas in World War II. A few moments later, the room was blown to bits. Another man told me of facing a dangerous confrontation on a Native American reservation. Later, after the other side had backed down, people asked him who the intimidating "big fella" was who came with him and stood closely by him while he faced down the crowd. Puzzled, he replied, "No one was with me."

The angel craze was overblown and overdone, and I, for one, became tired of all the angel statues and pictures for sale everywhere. But my guardian angel has never deserted me. Yesterday, I felt him again. I had just been wheeled into surgery when a bundle (more than necessary) of warmed blankets was tucked around me. Everyone else may have seen blankets, but I saw billowing, comforting, strong white angel wings enveloping me, and I knew I would be fine.

I had previously been quite afraid. I'm a lot older than the last time I went under the knife for a C-section 30 years ago. It's been 46 years since I had general anesthesia. But yesterday I went under totally calm and ready, no matter the outcome.

To back up a bit, until I was hired by the Secretary of State August 1, I hadn't had insurance for five years. After a one-month waiting period, I embarked on a series of long-needed medical check-ups including a mammogram and a Pap test, which were fine, and then to a gynecologist for a pelvic ultrasound for a pesky problem. All of a sudden that progressed to appointments for a uterine biopsy (not fun) and the ovarian cancer blood test (scary).

Both of those came back fine - no sign of cancer, which was a great relief. The only thing left was a follow-up ultrasound six weeks down the road. It is an understatement to say that I was shocked by what my doctor told me on Nov. 5. I totally expected to hear that I would be given a prescription and sent on my merry way. Instead, I was told that I needed surgery for a hysteroscopy, a D & C and removal of an ovarian cyst and uterine polyps. These are, she said, "seldom cancerous". What a loaded word, seldom. I was just gobsmacked.

After the surgery, I came out of anesthesia rapidly, with no wooziness, dizziness, weakness or nausea. I felt great yesterday, probably euphoric. Today I don't feel as great. I have three - yes three - incisions. I'm quite sore. The two small laparoscopic incisions are painless but the large one burns. I am very bloated, with the pumped in carbon dioxide trying to find a way out. My throat is raw from the breathing tube.

But, I am going back to work tomorrow and over the next week, while I await these new biopsy results, I will be calm, because I still feel those great white wings surrounding me. 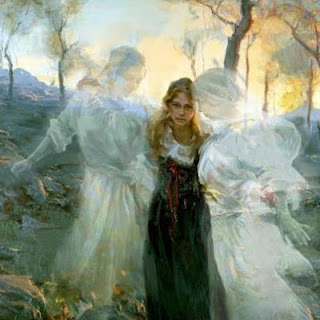 I hope you all have at least one guardian angel to watch over you, to protect you and care about you.

Julie dear, I'm very sorry to hear of your health problems.............but hopefully they will soon be completely behind you and you will be declared "good as new".

May many guardian angels surround you.....and know that I too am thinking of you, sending love and wishes for a quick recovery dear friend.

What a lovely post. An Angel has always been with me and has saved my life several times.
Mary

Sorry to read about your health problems Julie, but it's great to know that your guardian angel is there for you :o)
Don't be in a rush to get back to work - see how you feel first, another day at home won't do you any harm.
Sending healing hugs.
Rose H
xx

it has been awhile since I have sat down to write you. I haven't been as active for sometime. I am so glad your surgery is over, and that you have angels watching over you. I have known since childhood that my angel was really active. More than ones I have been in danger and knew that I was being watched over. Take care of yourself sweet girl, Mary

I hope all of your worries are gone soon. Your angel post is beautiful and I absolutely love the picure of the girl surrounded by an angel on each side. I'll bet they are there with you now...

Very best wishes and love to you sweet girl. Hope the results are good ones.

healing wishes from me too Julie, I am glad you are wrapped in angel wings through this

I too have seen and felt the angels - we like to recount to ourselves the wonderful incidents.

I'll be thinking of you over the next few days and weeks - waiting for the good word. I too had a biopsy like you did - and it did turn out to be cancer - but caught so early that I only needed surgery - no chemo and no radiation - and I've been cancer free for 6 years. Good things are coming to you - keep those angels close.

Oh, my, reading how many times your angel has been with you should make every doubter a believer! Wishing you all the best for a quick recovery.