NIAMH AND OISIN AND THE LAND OF TIR NA N'OG 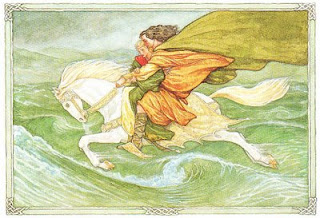 "Oisin and Niamh of the Golden Hair" by P.J. Lynch
http://www.pjlynchgallery.blogspot.com/
(A set of Irish postal stamps is based on this illustration!)
At least twice this past week, I found myself wishing I was somewhere far away from North Dakota. One time was Tuesday afternoon, when I was fighting my way home during the second blizzard in 11 days. Another was the next morning, when I got stuck in the parking lot at work and it took three guys to push me out. They were nice enough to blame not bad driving on my part but on my "light, little" Sunbird for getting me into trouble.

Anyway, I was wishing I was somewhere bright and warm, where you don't have to go out and earn a living. Somewhere with no health or money worries and no nasty people to deal with. Some place like .... Tír na nÓg.

Tír na nÓg (pronouced Tear na Noge) is the most famous of the otherworlds in Celtic mythology. The name roughly means "Land of Youth." When the last generation of Tuatha Dé Danann (the gods and goddesses who ruled ancient Ireland) were conquered in battle, they were allowed to stay in Eire - if they went underground. Some retreated to live under the hollow hills and thence became known as the sidhe - or fairies - of ancient Celtic myth. Others went to Tír na nÓg. 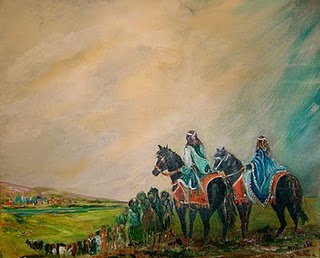 Artist Unknown
Tír na nÓg was considered to be a place beyond the edges of the map, located on an island far to the west of Ireland. It could be reached by either an arduous voyage or an invitation from one of its fairy residents. This otherworld was a place where sickness and death did not exist. It was a place of eternal youth and beauty. Here, music, strength, life, and all pleasurable pursuits came together in a single place. Here happiness lasted forever; no one wanted for food or drink. It is sometimes considered to be  the Irish equivalent of the Greek Elysium, or the Valhalla of the Norse.
However, Tír na nÓg was not a place where souls went after death. The island was only inhabited by fairies and elves. Only a few mortals had even seen the island and their journies there often ended unhappily. 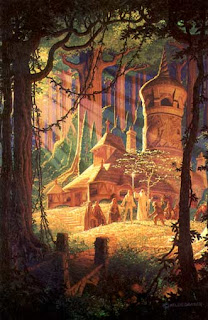 Greg and Tim Hildebrandt
Tír na nÓg is perhaps best known from the tale of Oisín (O-Sheen), one of the few mortals who ever lived there, and a fairy goddess, Niamh (Neeve).
Oisin was one of the great warrior poets of ancient Ireland. He was a member of his father Fionn’s band of legendary heroes, the Fianna. One day while Oisin was out hunting, a beautiful maiden approached him. She was Niamh of the Golden Hair, one of the Tuatha De Danann and the daughter of Manannán mac Lir, the god of the sea. Naturally, Oisin fell in love with her. She chose him to be her lover and live with her in Tir na nÓg. 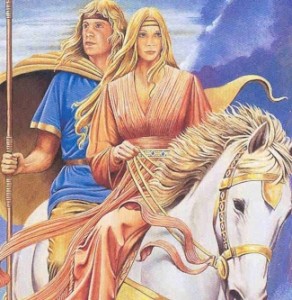 "Niamh, Oisín and Embarr", Artist Unknown
﻿They traveled to the Blessed Realm on a magical horse named Embarr, able to gallop on water. There they were married and lived happily together in that enchanted fairyland. Nobody - including Oisin - ever grew old or sick in Tir na nÓg. But even the land of eternal youth couldn’t banish memories and he began to miss his people and his home terribly. Niamh understood his need to visit the mortal world again and see his friends. She provided him with a fairy horse to take him there. She warned him, however, that he must not set foot on the earth – if he did, he would never be able to return.

Arriving back in Ireland, Oisin was devastated to learn that 300 years had passed in Ireland since he had been with Niamh, though it seemed to him only one year. His father and his men were long dead and the Fianna were the stuff of legends. Oisin decided to return to Tir Na nÓg and his beloved Niamh. On his way back he came across some men trying to lift a heavy rock and bent down to help them. Tragedy struck when he slipped from the saddle. Falling on mortal soil, Oisin was instantly transformed into an old blind man.

Oisin wandered Ireland for many years before St. Patrick took him into his house and tried to convert him to Christianity. Oisin told St. Patrick all of his tales of the Fianna and of The Land of Dreams. He eventually died without ever again setting eyes upon Niamh and Tir Na Óg. 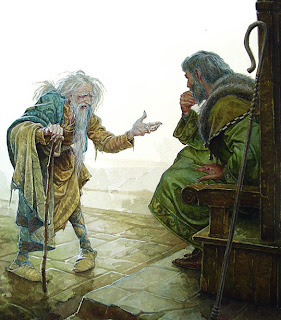 You might check into Maire Brennan's song of the same name. http://www.youtube.com/watch?v=VKGe_it8l3U

Dear Celtic Lady, your blog is exceptionally interesting. Thatnks for all the hard work and the entertainment which it provides.
NIgel JAMES - Vienna (diarikom)

Wow what an enchanting story.This is my firsr visit to your blog.I enjoyed myself so much that I decided to follow you.I love all things Irish.Visit my blog and my profile to see we have alot in common.

So how is Julie??? you know that I love all your stories.
come by and tell me what you are doing.
I am reading Montana Sky by Nora Roberts...just started it. My daughter loves her books, so I am givin it a try. Your, Mary

Hi Celtic lady!
I really like this story and all your stories for i love fairies and elves! Your blog is lovely! :)

Your blog is very good. At the start you mention that a series of stamps was produce based on the pictures. Could you tell me who produced them so I might check their availability please? Thanks Niamhs_Mum

It was a total unintentional coincidence that I even seen such a thing because... I studied this in Ireland. I even wrote of this very tale. I had studied the Irish Sagas and the Celtic Literature and Tir na nOg was something I had to do a presentation on in IADT (Institution of Art, Design, and Technology in Dun Laoghaire). I actually wrote about book about this phenomenon. I was fascinated to hear a different paraphrase though. This is a very unusual tale of irony, agony, and fantasy.