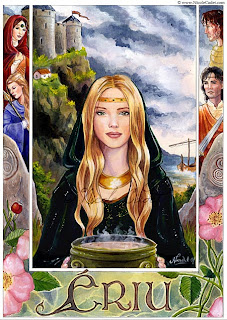 "ERIU" by Nicole Cadet﻿
Happy St. Patrick's Day! Erm - let's make that Happy Ériu Day instead. I like honoring an ancient Celtic goddess more than an upstart Catholic saint on this, Ireland's day.

The names Ériu, Éire and Erin for Ireland are national personifications -  or anthropomorphizations - of a nation. In Ireland's case, they are all feminine, although this is not always true. (England has John Bull and the U. S. has Uncle Sam). However, they are all well-recognized symbols or emblems of a country.

In Celtic mythology, Ériu was the matron goddess of Ireland. (The modern name for Ireland comes from the name Ériu and the word "land".)

With her sisters, Banba and Fódla, Ériu was part of an important triumvirate of goddesses of sovereignty. She was one of the queens of Ireland when the Milesians from Galicia invaded. All three sisters made deals with the Milesians that their names would be given to the defeated country. This was granted to them, although Ériu/Éire became the chief name in use (Banba and Fódla are still sometimes used as poetic names for Ireland.) 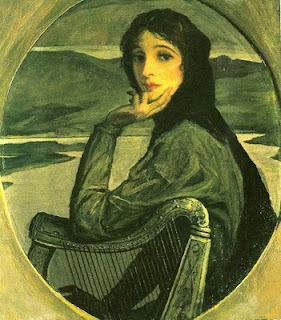 "KATHLEEN NI HOULIHAN", Sir John Lavery, 1923
﻿Another, more modern and more political personification of Ireland is Cathleen (or Kathleen) Ni Houlihan, a symbol of Irish patriotism (especially of an independent and separate Irish state). During times of trouble, especially war, Cathleen walks across Ireland to gather the support of men and boys to aid her in battle. As she gathers her supporters, she has the appearance of an old woman. Yet when she has gained her followers, she takes the shape of a fresh, high-spirited young woman.
The help of young Irish men willing to fight and die to free Ireland from the tyranny of colonial rule often resulted in the men becoming martyrs for this cause. However, their deaths were not be looked upon as tragic or needless, because they died as heroes and they will always be remembered as giving their life's blood to Ireland.
The great Irish poet and playwright William Butler Yeats, along with Lady Augusta Gregory, wrote a famous eponymous play about Cathleen Ni Houlihan - who is also sometimes called the Old Woman or Mother Ireland - in 1902.

It is set in a peasant cottage in the Irish village of Killala on August 22, 1798, the place and date where French troops landed to support the United Irishmen's revolution against England. Indicative of the symbiotic relationship between literature and politics, the play was performed just before the famous 1916 Irish Easter Rising against the English.

Here is the script of the play: http://cathleen-ni-houlihan.blogspot.com/
Posted by Julie at 7:40 PM

I loved this post and agree with the sentiment to honor Eriu instead. I am a Kathleen so I enjoyed your talk about her which I had never heard before.

You always have something to share about the Celtic's. I did not know about the Eriu. I guess it would be smart of me to find out more about our family line...Thank you for always giving delightful knewledge. Big Hugs, Mary

Wonderful reasearch and insights, Julie! Thanks for sharing!

Beautiful blog Julia - wonderful to ahve the celtic references. Long may it continue :)

Do you know how the Legend of Eriu was started and Cathleen Ni Houlihan were started? Was Cathleen a real person and the story about her traveling to gather boys and men to fight for Ireland an embelishiment of something that she did, inspire soldiers to fight for ex. or was she not a real person but the personification of Irish patriotism? (I guess from the post is it the latter?) Is her name Irish? The Ni in her name is like Di in many Italian names, I wonder what it and Houlihan mean.