"OSTARA BLESSINGS" by Angels Creations
﻿
The vernal - or spring - equinox occurs in my time zone about 6:30 this evening. As I have done in the past few years to honor this date, I am posting pictures showing beautiful spring goddesses. The goddess Ostara - or Eostre in Germanic languages - is honored at this time of year.

After publishing so many spring goddess paintings over the past few spring equinoxes, I was afraid that I wouldn't find any new images. But I did find a number of lovely ones to choose from, picking the most beautiful and rejecting any that I thought ﻿unattractive. There was one of Eostre with a face half human and half hare. Although the hare is a strong symbol of the vernal equinox, I found the image rather off putting. I also rejected any that showed nude women. Not that I found them unattractive, but I thought some readers might be offended.
﻿ 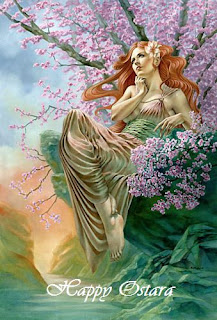 "BELTANE", copyright Matt Hughes
MattHughesArt.com
I hardly need to explain the vernal equinox. It is one of the two times of the year when day and night are of equal length. It is one of the eight major holidays of the Celtic Year. The Celtics called this day Alban Eiler.

In my time zone, the sun at this time of year comes up about 8:00 am and sets about 8:00 pm. Here in America we switched over to Daylight Savings Time a week ago today. It is lovely to have light late into the evening, but it is so hard to get up in the morning.

I had gotten used to - and had been happily - rising in daylight, but after the time change I found myself out of sorts all week. Many people say this feeling is because of the loss of one hour as we spring forward, but that is nonsense. It's the loss of light in the morning that throws us for a loop. 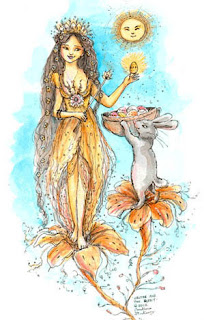 Paulina Stuckey-Cassidy
The Christian Easter holiday is derived from the pagan holiday Eostre or Ostara, as can easily been by the name. Many times, Ostara and Easter occur relatively close to each other, but this year it is not the case, as Easter will take place on April 24, almost the latest date it can occur. Easter is a moveable feast, meaning it is tied to the lunar calendar rather than a specific date - and can occur as early as March 22 or as late as April 25. Therefore, I tried to avoid using images that featured goddesses holding baskets of Easter eggs!

So here are my 2011 Ostara/Eostre paintings/images. I am sorry that so many are unattributed. I try hard to attribute all paintings I find on the web, but I find many on what I call "secondary sites", those which have already "borrowed" the paintings/images and not bothered to credit the artist.﻿ 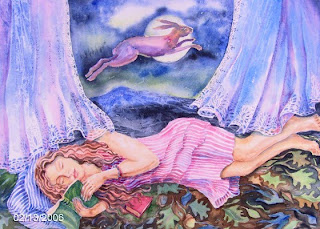 "READING ABOUT EOSTRA" by Trudi Doyle

Incidentally, I recently received a very formal e-mail from an artist whose work I had used once. She had the absolute gall to send me a CONTRACT which would enable me to show her work on my site. Of course, I would have had to pay a healthy fee to do so. What nerve! I promptly removed her image from that particular post and will never, ever use her again.

I have actually received e-mails from a few wonderful Celtic fantasy artists who are so thrilled that I use their art. I even devote entire posts to my most-admired artists. As often as I can, I include their website, although this is not really necessary, given that any reader can Google an artist's name and easily find their website. I find that most artists are truly thrilled and pleased to learn that I have given their work a wider audience. Not that I am a very widely-read blogger, but every little bit of publicity helps an artist sell his or her work, right?

(Note added April 9: I received an e-mail comment from Trudi Doyle, the artist whose painting is shown above. She asked me if I would mind adding a link to the print of this painting, which is for sale in her Etsy shop. Trudi, I'd be delighted to! Here's the link: http://www.etsy.com/listing/63497712/art-print-reading-about)

I also make it a practice to purchase prints or cards by these artists. For example, I found the work above on Etsy today. Although I am too late for the holiday this year, these would make great gifts for next spring equinox. 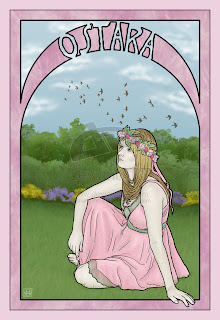 It is not truly spring here, although it is trying to be. March came in like a lion. The frigid Arctic air and fierce Alberta Clippers were unwilling to give up their hold over the state well into the middle of the month. Finally this week we have experience a slow melt. A slow melt is good for flood-weary ND folk who endured some really terrible flooding just two yea﻿rs ago in 2009. Even Bismarck, usually flood-free because of the Garrison Dam, had flooding problems that year in the southwest portion of the city because of a massive local ice jam. 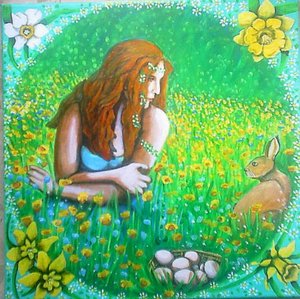 March can be a very deadly and serious month for weather problems in ND. A week ago Friday, a terrifying late spring blizzard sprang up with very little warning and closed down virtually all highways in the state. About 800 people were stranded on the roads during this vicious storm, including state highway troopers and one pregnant woman who feared she had gone into labor. Fortunately, ALL were rescued, with only minor injuries. This is almost a miracle.

The next day, newspapers carried stories of the notorious blizzard of The Ides of March, March 15, 1941, in which many people lost their lives. The trouble with these late wubter blizzards is that the day starts out just fine. People, fooled by the mild weather, would travel to town and then be caught in a tempest on their way home. Such was last Friday's blizzard. As I drove to work that morning, it was mild and featured blue skies. By 10:00 am it was snowing and by 3:00 pm they sent us home, with the Interstate highways already closed off. 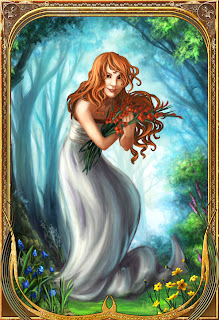 "GODDESS OF SPRING" by Alayna


Today, the streets are clear and the gutters are running with water. Our massive snowbanks are shrinking, but they are dirty, covered with sand and black dirt. All the detritus of winter has now been revealed - loose papers, pop cans and bottles, stray shoes (how do people lose one shoe?), etc. It is truly quite ugly, but even so, we are not as depressed as we were in the frigid, seemingly endless days of winter. 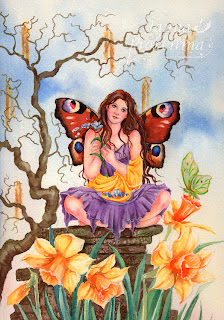 ﻿I have blogging friends in the Southern US and in England. I read their blogs with pure envy. WE don't have blooming daffodils, primroses and crocus. Our willow catkins won't be out for another month. Our fruit trees won't bloom until May. Our grass is dead and brown. But now, we have HOPE, hope that spring will indeed come as it has for millenia, just when we began to despair that it ever would come again. 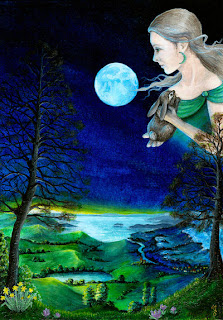 I love this Ostara painting which features a full moon. Did you see last night's supermoon, in which the moon was closer to earth than it was in the last 18 years? (The last full moon so big and close to Earth occurred in March of 1993.) Supposedly it was a full moon of rare size and beauty, but because of cloud cover we were not able to see it.

Full moons vary in size because of the oval shape of the moon's orbit. It is an ellipse with one side (perigee) about 50,000 km closer to Earth than the other (apogee). Nearby perigee moons are about 14% bigger and 30% brighter than lesser moons that occur on the apogee side of its orbit.

Well, we still have tonight, when to my unscientific eye the moon will still appear full on this, the spring equinox. Will it still be a supermoon? I don't know, but I do hope to see it. It will add to celebration of spring arrived at long last.
Posted by Julie at 10:09 AM

Although all these paintings are wonderously beautiful, greetings from a Debbie Downer: let the flakes fly because springtime and I never seem to see eye to eye. LOL! You most definitely can have my share of this no snow season.

Beautiful art as always. Blessed Ostara to you and yours. We have similar weather here in New York state. No blooms yet and frozen ground. Soon though.........

A blessed Alban Eilir to you! :)

Hi Julie-greetings from Ireland! I came across my painting "Reading about Eostra" on your blog.I read what you said about publishing an artists work without permission and although I do agree that there's no such thing as bad publicity when one is trying to make a living from the creative arts -I respecfully suggest you add a link to the artists site or shop when publishing . Technically it is an infringment of copyright which is a serious issue if permission is not sought.I have this piece for sale as a limited edition print at my Etsy shop http://www.etsy.com/listing/63497712/art-print-reading-about. Perhaps you could take a moment to add the link? I too have a blog and will become a follower of yours - hopefully you will reciprocate ! Trudi

Hi from Ireland - Easter blessings -I see you have included my "Eostra" image to your blog. Perhaps you would take a moment to add a link to my print of "Reading about Eostra" painting which is for sale in my Etsy shop.
http://www.etsy.com/listing/63497712/art-print-reading-about
Thank you,
Trudi

I'd be happy to Trudi! I'll do it right now!

Many thanks Julie - I will become a follower - your blog is beautiful and informative - perhaps you will take a look at mine as we do have some interests in common including Celtic Mythology which is a fascinating and inspiring subject !
Trudi

Hi
For this paint... https://lh3.googleusercontent.com/-ABBzeaBjXtI/TYU_FyoKWnI/AAAAAAAAGpc/Pa7nKb1UlAM/s1600/a+eostre+VI.jpg
The painter is Helene Grasset
Her website : http://omentie.canalblog.com/

I found your page in a random image search - the painting you have from "BELTANE", Mike Nichols is incorrect.
The painting was done by Matt Hughes and is copyright protected.
Please attribute correctly and link to his website: MattHughesArt.com