TO ALL THE DOGS WE'VE LOVED BEFORE 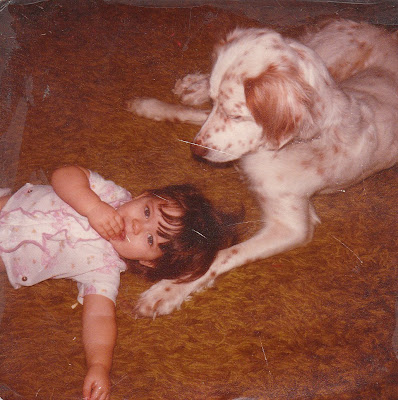 Kristen and Beau
I've spent the past few days going through old photos. I haven't found the ones I was searching for yet, but I did find pictures of Kristen with each of our family dogs (except for our first dog, Jacques, who was before Kristen's time, and whose pictures we lost in our home fire).

Dogs have been a part of daughter Kristen's life ever since she was born. No wonder she is a dog lover. Her very first dog was Beau. We'd already had Beau, an English setter, for seven years before Kristen was born, so he had been our only baby. We wondered how he would adjust to a new baby, on top of having been kenneled for two whole months after our fire. We needn't have worried. Beau appointed himself Kristen's guardian, and always would sleep by her crib whenever she napped.

The first time I heard Kristen laugh, she was laughing at Beau's antics. And "Beau" was her first word ("Mama" came in second.) 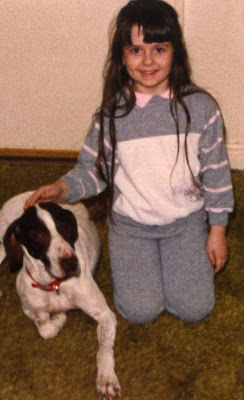 Kristen and Brandy
When Beau was 14 1/2 years old, he couldn't walk any more and we had to put him to sleep. That was a very sad day for one little girl and her mom and dad. That was in January. That March Kristen and I came home one day to find Dan anxiously waiting for us. There was a three-year-old German shorthair pointer available for adoption. Could he get her as a hunting dog? Yes, we said, as long as we could get a cocker spaniel too.
Brandy was in bad shape emotionally when she came to us. If someone innocently made a hand gesture, she dropped to the floor, cowering. Her tail was always tucked between her legs. She had been "strictly trained", it was said. I say she was abused. But with the love and kindness of the three of us, she thrived. She became Kristen's "Baby" forever more, and always slept with her. "Take care of my Baby," Kristen would always say if she was away from home. 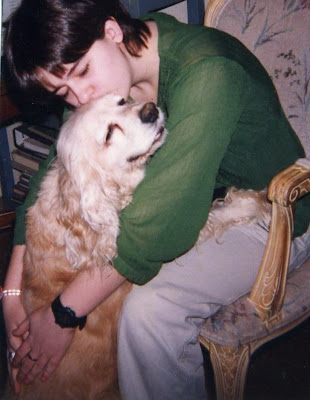 Kristen and Lady
We didn't forget the part about the cocker spaniel though. That May, I saw an ad for a cocker and Kristen and I went to meet the little pup. We had just a few minutes to decide on her, as a couple of guys stopped by to see her too. Kristen and I looked at each other, said "Yes" and never looked back. Lady was named - by Kristen - for the female star of "Lady and the Tramp".
Admittedly, bringing that little puppy into the house set Brandy back a bit, after she had been doing so well. But she quickly rebounded, and they became buddies. This dog, meant to be a hunter, became a beloved and adored indoor pet. But she was good in the field too, working only for her beloved master, Dan, and no other hunter.
Just before Kristen started college in Washington, DC, Dan and I found out that Brandy had cancer. As she was not suffering at the time, we did not tell Kristen, hoping to wait to put Brandy to sleep after Kristen left. But in August, it was time to say goodbye to Brandy, age 14, and we knew it. 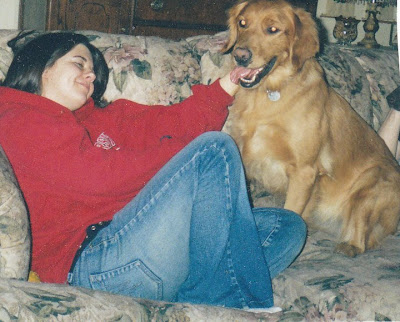 Kristen and Penny
(Note the yellow ball Kristen is hiding from
Penny in the photos above and below)
**********
It didn't feel right having only one dog in the house. It didn't feel right not having a hunting dog. (The only time Lady heard a gunshot, she ran away, tearing through the cornfields at a friend's farm, and was not found for hours.) And, it certainly felt wrong not having Kristen home for Christmas (she spent her junior year of college in Strasbourg, France).
So what did I do? I went out and got a hunting dog for Dan for Christmas. And that's how big, rowdy golden retriever Penny came into our lives. We spent Christmas Eve day wondering how a puppy could sleep so much, and was something wrong with her? Christmas Day and every day after that, we wondered how one little dog could have so much energy.
That Penny Pup harassed Lady no end, and she was always stealing Lady's dog bed. However, there came the day when Penny got too big for Lady's bed and "gave" it back to her. Penny and Lady became pals too.
Kristen was totally overwhelmed by Penny when she finally met her a year later. (Penny was a very demanding, "Play with me! Play with me!" kind of dog.) I think the tables finally turned the day I came home to find Penny and Kristen cuddling on the recliner. Even though Penny didn't see Kristen more than once a year, she would always remember her, and would spend at least the first 15-20 minutes licking her face. "Welcome home, my girl, welcome home!" 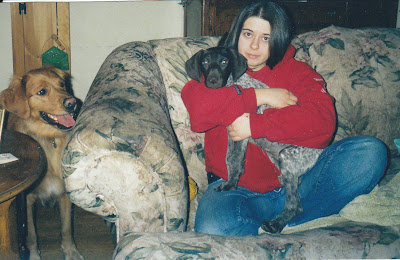 Kristen and Gracie - why the sad faces?
(Penny can't resist getting into the act too.)
**********
As the years went by, Lady became deaf, cataracts nearly blinded her, she was incontinent and she was losing her teeth. But like Brandy, as long as she was not in pain we weren't going to put her to sleep. But for the third time, there came the inevitable day, and Lady, age 16 1/2, crossed over the rainbow bridge with me gently holding her.
Dan and I were heartbroken, and Kristen, all those miles away, was very sad. But Penny - Penny was devastated. She became extremely depressed. We knew we had to do something to bring her out of her funk. Wouldn't it be fun to have two hunting dogs? And we'd already had a German shorthair - they're nice pets, right?
Wrong! Gracie came bounding into our house and took over in an instant. She fought with Penny, tore all the hair off her tail, chewed her ears and her muzzle. Penny took it all patiently, only once giving Gracie a well-deserved nip. We teased Penny that she was finally receiving payback after all the grief she had given Lady. I've written often about how naughty Gracie is, and how many things she's destroyed (she's Marley The Second). Meanwhile, Penny, the former troublemaker, had mellowed into "the good dog".
And then suddenly, in January, we lost Penny, probably to an unknown heart ailment. So Gracie has been our only dog for six months. I've often wondered why Penny had to leave us at the young age of 6. Was it so that I could become so much closer to Gracie?
Of course, I'll never know. But I do know it still feels strange to have only one dog in the house. And I think there might be a little pup at a shelter who could give Gracie a run for her money. Dan is willing. How about you, Gracie?
(Kristen lives in an apartment now so she can't have dogs. However, she is Mom to kitties Arabella, Sweetie Pie and Oliver.)
Posted by Julie at 4:19 PM

They're all beautiful. We couldn't live without a dog.

We have always had a pet. Cats and dogs. Your dogs are really lovely, they are faithful friends. They don't care if you brushed your hair, or anything.....they just love loving you. Rusty our first Beagle was a mix, but no one could ever figure out what the mix was. He was small, we took him everywhere. He really believed that he was one of the kids. If they went up a tree, he was going too. He was a hunter with Arney. And the best playmate my kids could have ever thought of. He took turns sleeping with the 3 kids, and always seemed to know what time it was. He would not die when he needed to. He was 17 years old and his life force would not let go. So on a cloudy day in the middle of winter we had to let him go. It broke our hearts, and for awhile I though no more dogs, no more tears. But time heals all things and soon there came a day when I wanted a four legged friend, and Mattie Anne ( Lemon Beagle) came in on a airplain from California to take our hearts again. LB came four years later, and he is the scout. He takes care of us. Mattie Anne just loves and eats. Hugs, Mary

I can't think of a better way to mark the passage of time than with dogs and children.

What a good story.... I enjoyed reading about your family of dogs. We usually are a two-dog family, too, with lapses very infrequently. Scout seemed pretty happy and content before we brought Maggie home. He could stay home alone, sleep wherever he wanted.... Even when we went out of town, my father-in-law could come over to let him in and out of the house. Now, with Maggie, they're outside in the yard with the door open to the garage if they need shelter. No more spending the night at home alone. They're both getting boarded this weekend while we go out of town. And Maggie is a handfull.... Much like your Penny and Gracie!

Thanks for going by to visit Maggie at my site. Scout has also been introduced in a post under the "pets" label.

Have a great weekend!

You never forget the animals that have been part of your family. We've always had either dogs or cats and more often than not we've had both. All have their own special places in our memories - or in one case in our lives as B Baggins is still very much with us:)

I've never lived a day without a dog that I know of...and very few without a cat. We love them and lose them and never forget them. What a beautiful post.
Sandi