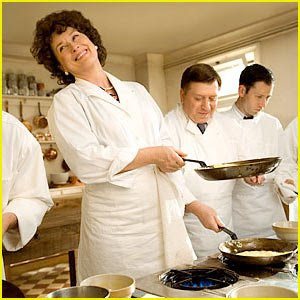 There's a new movie coming out August 7 that I might just have to check out, called "Julie & Julia", based on the true story of a young New Yorker named Julie Powell who sets out to devote an entire year to cooking every.single.recipe in Julia Child's "Mastering the Art of French Cooking" cookbook. (524 recipes in 365 days.) The movie adds the back story of Julia Child's life during the time when she lived in France and attended cooking school. Meryl Streep, who plays Child, is good in everything she does, so I'm sure she'll be a delicious JC (pun intended). 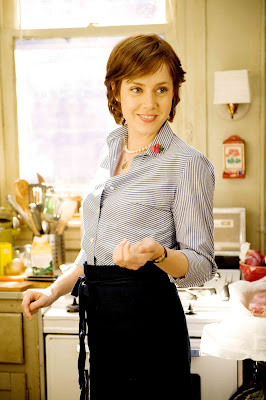 Amy Adams plays Julie Powell - smart, saucy (Bearnaise or Hollandaise?) and self-deprecatingly hilarious. I like Adams too, so this should be a fun movie. I hope they give Julie Powell "equal time" and more to her character.

Before there was "Julie & Julia", the movie, there was Powell's "Julie and Julia", the book. I read it a couple of years ago and enjoyed it very much. Even if you've never made a roux, souffle or fricassee, it's quite entertaining - a lot more entertaining than "Martha Stewart Entertaining". (I would venture to say that Powell is not a huge Martha fan.)
But before the movie and the book, there was the blog. I was unaware of this blog until a few days ago. Powell no longer writes the blog, but it is still open. To read "The Julie/Julia Project" go to http://blogs.salon.com/0001399/2002/08/25.html. This will take you to the very first entry so you can read it forward instead of backward.
Anyone who's even paged through "Mastering the Art..." can ascertain that Powell's was a colossal undertaking. She often doesn't get home from her "soul-sucking government job" until 8:00 p.m. and her long-suffering husband and/or guests sometimes don't get to eat until 10:00 or even midnight. After moving from Manhattan to Queens, Powell has to scour various markets for ingredients and cart her food and wine home on the train or subway. A picky eater in childhood, she has to cook some really gross stuff (to me - hey, I don't even like snails or mussels). Brains, anyone? But she and hubby Eric "gamely" consume it all.
The not-well-off Powell spends a lot of money on expensive ingredients, she and her husband both gain weight on all that rich food (even as much as I love butter, oil and cream, I don't think I could have handled this diet), some nights she just doesn't feel like cooking - but usually does - and about five months into the project craves a simple salad.
She has as many whopping disasters and miserable failures as she does scrumptious successes and rousing triumphs. After the first nasty comment her blog receives, she explains that she had not been in possession of culinary expertise, but just "simply thought it might be good for me and hopefully entertaining for others to map my progress as not an accomplished, but a passionate, cook." She also adds that she probably slightly overemphasized the culinary disasters, finding them inherently more interesting to read (and write, I'm sure).
The blog, naturally, is not as finely edited as the book, and I don't mean just for spelling and grammar. (Potty mouth Julie!) But that makes it more real and more immediate, and must have been a delight to follow day by day. Apparently, Powell's blog is the first blog ever to be made into a book - and then a movie. Bon Appetit!
~~~~~~~~~~~~~~~~~~~~~~~~~~~~~~~~~~~~~~~~~~~~~~~~ 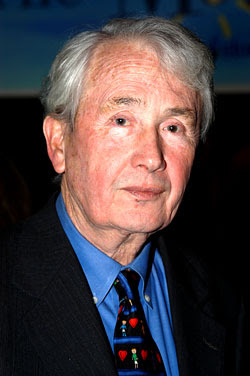 In the past few weeks we've had to say goodbye to a few really good men (and I'm not talking about Michael Jackson). This week I learned, with much sadness, about the death of Frank McCourt, best-selling author of "Angela's Ashes", "Teacher" and other books. McCourt is considered to be an Irish writer, but actually he was born in America. His family later returned to Ireland, where they suffered the grinding poverty depicted in "Angela's Ashes". 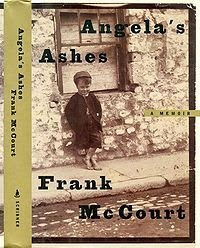 "Angela's Ashes" has been described as a book almost too painful to read. But I believe it is an essential read, especially for any American - or anyone - of Irish heritage.
I belong to goodreads.com, a website for book lovers (link on sidebar). In goodreads, members list and rate the books they've read. Prospective readers of those books can ask you, "Should I read this book?" I always give a resounding "Yes" to "Angela's Ashes", and also to another well-known book, Anne Frank's "The Diary of A Young Girl."
I'm going to add another strong recommendation, for a not-so-famous book: "The Book Thief" by Markus Zuzak. I've actually seen it on some goodreads' readers "Worst Book Ever Lists". Universally, they call it depressing.
I can see that a book narrated by Death about a little girl living in Nazi Germany could be a downer. Yes, the story of Liesel - the young collector of books not her own - is not a happy one, but that's no reason not to read this book - or any book that rings so true about the human condition and the enduring human spirit in times of desperate situations and unspeakable horrors.
Posted by Julie at 11:40 AM

Hi Julie. Thanks for the link to the blog. I was going to look for it but had put it off. You've saved me the search.

Kris and I have plans to see the movie together when it comes out. Can't wait.

"The Book Thief" - I perused the book and just could not bring myself to read it. Call me a coward. I did the same for "Schindler's List", book and movie.

Hi Julie; Appreciated this post. Will check out the link you gave to the original blog. Read Angela's Ashes twice - sad and inspiring. Was sorry to hear that Frank McCourt died. Thank you for the recommendation for The Book Thief. Sounds like something I would like.

Hello, Julie -- how are you?? I stopped by to see and found you're doing well and your blog is more beautiful than ever. Hope your summer is good too!
xxxxx

Great post! I happen to be reading "Julie and Julia" right now!
I'm looking forward to the movie with 2 good actresses!
Amy Adams was wonderful in"Junebug", too!

I read "Angela's Ashes" but I'm with Annie on "the Book Thief"....I just can't bring myself to read really sad, depressing books.

The movie sounds as though it might be fun to watch but I'm afraid that the books aren't my kind of thing. I'm not a reader of 'serious' books I'm afraid, I like a happy ending and feel good stories or a rousing adventure story.

I saw the previews for this film and it looked great. I may have to read the book though now that you have spoken of it.

Well, Julie, you hit a nerve with both of these topics today:-) I just bought the book by Julia Child that "Julie" read and took her ques from! It's in paperback and I have JUST purchased it so it's still in my car!

The other note, I hadn't heard about Frank McCourt's death. How sad. I must be living under a rock not to have heard. I started reading Angela's Ashes but, like some others have said, it was too painful to read. My sister read it and loved it so I might have to have a go at it again.

Have a GREAT week-end and know I'll be one of the first in line to see the movie! (Love Meryl Streep)

That is a movie I'm looking forward to as well. Julia Child has special place in my memories because of my own Mom. I'll have to check out Julie's blog too.
Did not know about Frank McCourts death. Angela's Ashes has stayed with me ever since I read it. When I wake up each morning I have
"Presbyterian Hair" like little Frank did.

Well Sweetie, I am looking forward to the movie Julie and Julia. I will have to grab my daughter, she wants to see it also.
I am reading Go Down Moses right now by Faulkner. I had wanted to read it, and then forgot about it. So when I found it a a yard sale I got it. I hope you are having a sweet summer. Please stay in touch,
Mary