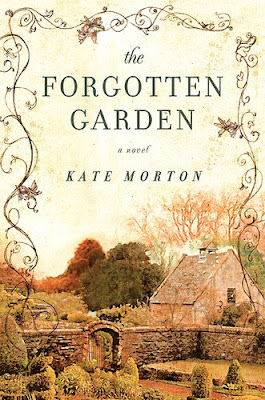 Armed with birthday money from Kristen, I was browsing the new hardcovers section at Barnes & Noble. I seldom go into B&N anymore, and if I do, it's only to browse - not buy.

I haven't stopped buying books - I don't think I could. I've just stopped buying NEW books. I gave up my B&N discount card some time ago. I come in to scout out books, then purchase them used on amazon.com.

But this visit I had some mad money, and I found a big fat book - 550 pages! On the cover of "The Forgotten Garden" is a painting of an old English cottage - very like the cottages I had recently seen in "Lark Rise to Candleford".

I opened the book and saw that the end papers were a reproduction of Arthur Rackham's brown-toned painting of faeries being blown about by a brisk autumn wind. Because of the cover and endpapers, I was nearly sold on the book right then and there. Reading the dust jacket flap completed the sale in my mind.

That was a few days ago, and I have finished the book. I heartily recommend it. It was all I expected it to be, and more: it's part Gothic mystery novel, set in Victorian and Edwardian England, and part modern mystery, set in present day Cornwall and Australia.

It's also part romance and part fairy tale. There are several actual fairy tales incorporated into the book, which is about - among other fascinating characters - "The Authoress", who is a writer of fairy tales, and a painter who illustrates fairy tales in the style of Rackham.

And - ta da! - it has a secret walled garden, much like Mary Lennox's secret garden in the much-loved book by Frances Hodgson Burnett. In fact, the secret - or hidden - garden of the book is a homage (an homage?) to Ms. Burnett, who makes an appearance in the book as herself, a party guest at Blackwell Manor, the Montrachet family estate in Cornwall.

This book is nearly perfect, as a birthday book should be. I say nearly because it does skip around in time and place. At first it was a bit difficult to follow, not because I could not immediately sense the era or the setting, but because I got the girls/women confused. For this book follows the lives of four women of one family: Georgiana, Eliza, Nell and Cassandra. Read this book and you will love them all, and remember them for a long time.

"The Hidden Garden" starts with a four-year-old girl, later to be named Nell, found alone and abandoned on the docks after her ship has arrived in Australia from London. A dock worker and his wife "adopt" the girl. Only as an adult does she learn her true circumstances and, later, returns to England to discover who she is.

Nell comes close to unraveling the mystery, but has to stop searching to assume responsibility for her granddaughter, Cassandra. It is up to this granddaughter to travel to Cornwall and finally learn the circumstances of "Nell's" birth.

I had never heard of author Kate Morton before, but I've learned that she wrote another book, "The House at Riverton", a bestseller in her native Australia and in England. I'm off to locate a used copy of that book now! 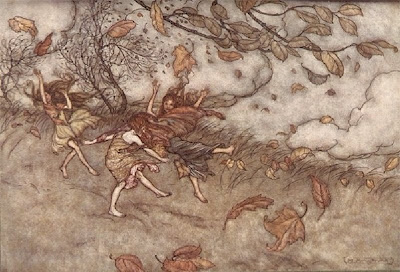 I am an intermittent commenter due to not having my own computer currently. It has been quite a while, but I stop in to read every once in a while.

The birthday books sounds wonderful (Happy belated Birthday !) I have head most of Kate Morton's books and they are great. I know you will enjoy them as you have enjoyed her current one.

I also have a copy of the illustrated "Larkspur" book and find it enchanting. AND I too go to Barnes and Noble (and Borders) to check out books and get them mostly on Amazon.

Glad to hear the recommendation of another good book and I will check it out.

This sounds like a wonderful book...I will see if our library has it!
~Kelli

Such a Wondrous Place this Faery Space said...

Rackham is my idol! I was just asking the Universe for another great book and here you are with a recommendation! Blessings and surprises never cease! You should go to the movie anyway. Get your fave treat and enjoy with the best person you could ever enjoy with, yourself. Now that would be a beautiful way to see a fantastic movie!!! Love to you, Amy

My friend just sent me this link :) I'm from PEI in Canada... i have been raving this book up and down. I felt like i was writing your blog about this wondermous book! You feel exactly as i do, throughout your writing :) You just had the right words lol
I had to chime in with you all and say this is #1 book in my books :) Not over Anne of Green Gables, of course... but *shock* it's right up there lol

Hi :)
My friend sent me this link... and i just had to chime in with you all. wow! It could have been me writing this... You feel exactly as i do about the book. It's one of THE most wondermous books i've ever read. I don't even want to lend my copy out, i like to have it sitting where i can see it :)
It's a definite must read :)
Love,
Denise of Ingleside
Prince Edward Island
*my second posting, as my first didn't seem to work*

This sounds a lovely book, must look out for it - fairies, walled gardens and a mystery, sounds just about perfect:)

Hi Julie, I'm writing from the cool mountain town of Flagstaff.
That book looks wonderful. Great way to give yourself a birthday treat! xx

Julie- serendipity!! I bought this books a few weeks ago!

i have a paperback, with a different cover than yours...this is my one...

i havent started it yet, but it instantly appealed to me too.

After reading your review of this book I definitely want to read it! It sounds like just my kind of story, and I love how you described the front cover and the endpapers. It might be inspiration for art as well!

I will definitely look for that book! So glad you found the perfect birthday book for YOU!