NOW THEY SHINE IN THE HEAVENS 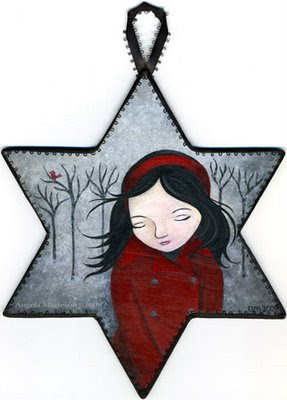 JILLIAN AND HER BOYS, HOLDING
THE STAR CALLED "SCHINDLER'S LIST"
Minnesota blogger Jillian Curtis and her children are engaged in what I consider to be an extremely worthwhile project. Read about it in the article below, which I am reprinting from the Winona (MN) Daily News:

"Jillian Curtis doesn’t want her children to bring hate into the world.

So she and her sons, Jarrett, 10, and Josh, 11, are building a Holocaust memorial — their first major undertaking in their first month of homeschooling — to remember the 6 million Jews killed in the Holocaust.

Curtis, 32, of Winona, and her sons have received nearly 500 stars in the mail, including one of their favorites, center, depicting Schindler's List, from artist Angela Matteson of Chicago. Curtis posted a request for stars, which each represent a Jewish life lost during the Holocaust, on her blog a month ago as a home-school project for the boys. The stars will be displayed as a memorial in their garden. The project is inspired by the movie “Paper Clips,” in which students at a Tennessee school, wanting to know what the number 6 million looks like, try to gather 6 million paper clips.

Instead of paper clips, the Curtises are asking people to send them stars.“We started with the Holocaust because that’s the world’s biggest tragedy,” Jillian said. “They need to learn acceptance and not to be bullies or start fights. I want them to be good people when they grow up.”

Jillian, 32, posted a request for stars, representing the yellow stars Jews were forced to wear in Nazi Germany, on her blog, http://www.blog-me-til-midnight.blogspot.com/, a month ago.

So far, about 500 stars have arrived at their home from as far away as Australia and China.

One, a blue card with a yellow Star of David on front, included this note: “What a wonderful thing you are doing! I designed my star to look like the sun in the sky because the brightness of those who died in the Holocaust still burns in my heart.”

Josh said thinking about the Holocaust makes him feel sad, and sometimes angry, because of all the children who died for no reason.

His favorite star so far is a cloth one, which is the biggest sent yet.

“(I was) wondering where the stars would come from, what they would look like,” he said. “I was hoping for a humongous one.”

For now, the family keeps the stars in a popcorn tin with planets and the words “Stories in the Sky” pictured on it.

This summer, Jillian’s husband, Robert, will help his kids build a wooden casing in the shape of a star, either a five-pointed star or a Star of David. They’ll put the stars inside and place the memorial in a flower garden next to roses.

Jillian said they don’t know whether they’ll make it to 6 million stars." 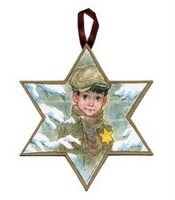 Jillian had contacted me about two months ago and I pledged to make a star for the project. I had not seen pictures of the other stars at that point. My design was going to be very simple, because I am no artist. It was also going to be yellow, because I am very literal! Now that I have seen some contributions, I am awed by the beautiful designs. But I am still going to participate! It doesn't matter how elaborate or beautiful the design. It's the thought that counts, and recognizing these 6 million human beings whose lights were snuffed out too soon. 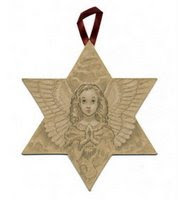 After I make my star I will publish a picture of it. I hope that those of you who read this post will consider making a star as well.
Go to Jillian's blog (link in the article above) to see other stars. For her postal address, email her at jillianmcurtis@yahoo. com. 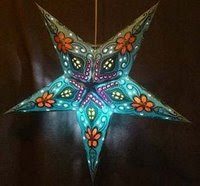 Thank you for posting the article. That is a great idea for teaching her children. All of us need to remember the holocaust and other times of cruelty so that we will not allow these things to happen again.

What a great idea Jillian had I am going to join in too. Thanks for posting this.

This is wonderful! I have heard about it and want to make a star too.

Hi Julie
Great post, however when I went to the webpage url and read her blog, nowhere did I find the post asking for the stars that listed any contact information on how to send one. I don't know if I missed it or if it has been removed.

Wow, this is a beautiful idea.

This is wonderful, there is no words to say how much we need to remember and celebrate these lives.
Human kind needs to wake up to the
needs that are infront of us past, and now. Hugs, Mary

Great post Julie,children should learn all about things like the holocaust,like Susan says hopefully it will stop this cruely from happening again!Thanks for bringing this to our attention!
Hope all is well at the moment!
Love from Kathy and the girls

ohhhh ohh !!!
I want to make one for sure. I have to go and check the details.
Thanks Julie!
for everything!
specially for your wonderful support and friendship!

What a beautiful idea and such beautiful stars. The cause is so good !!!!!

great stuff! love this idea.. I must go and see the blog.. maybe I could make a star.

Thanks for posting this. I am going to try and get my book group to do this. I have sent her an e-mail.

This is a beautiful cause.I lived with a survior of the prisons ..my dear mother survived but her siblings and parents were not as fortunate.
Peace love and forgivness is what my mother taught me.
On a happier note I have great news to share!! filled with Joy aNNa xo

Amazing - and heartbreaking at the same time. What a wonderful Mother to teach this way. Thank you for bringing this to us - I had not heard of this..
Colleen

Have a great weekend...I am going to yard sales tomorrow, and then to lunch with the girls...
I just love coming to your blog, Your, Mary

What a beautiful thing they are doing! And those stares are amazing.

Hi,
just letting you know I've wandered around and found myself a secret meadow, you can find me if you click my name.
Just came by to wish you a great weekend !!!

FABULOUS!!
I loved this. What a great way to teach some valuable life lessons to her kids.....I'm going to her site right now to look in.
Thanks for posting this information!
Joyce

I've just finished reading "Schindler's list". Also, as I am from Poland, I researches a little bit about http://iwka.wordpress.com/2008/05/13/sendlers-list-catholic-woman-rescued-2500-jewish-children/