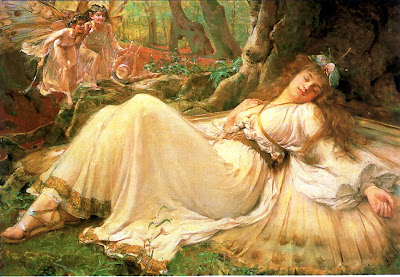 "There Sleeps Titania"
Frederick Howard Michael
**********
I had always thought that the Summer Solstice and Midsummer Night were interchangeable, occurring on the same date, but now I have learned that Midsummer Night can be celebrated as late as June 24, as it is in England. Perhaps that is why June 24 was selected as Fairy Day. 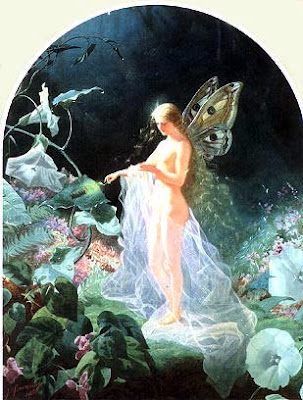 **********
"Titania"
John Simmons
**********
I thought this date would be perfect to share fairy paintings revolving around William Shakespeare's "A Midsummer Night's Dream".

The main plot of "Midsummer" is a convoluted tale that involves two sets of couples (Hermia and Lysander, and Helena and Demetrius) whose romantic cross-purposes are complicated still further by their entrance into the play's fairyland woods where the King and Queen of the Fairies (Oberon and Titania) preside and the impish folk character of Puck (or Robin Goodfellow) plies his trade.

Another set of characters—Bottom the Weaver and his bumptious band of "rude mechanicals"—stumble into the main doings when they go into the same enchanted woods to rehearse a play that is very loosely (and comically) based on the myth of Pyramus and Thisbe. 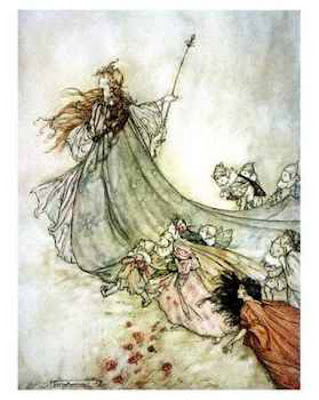 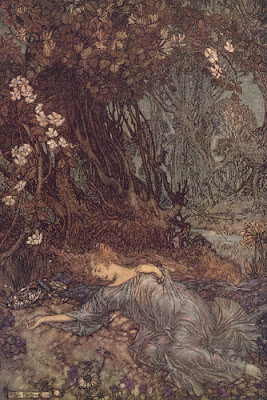 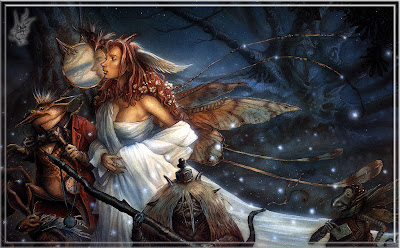 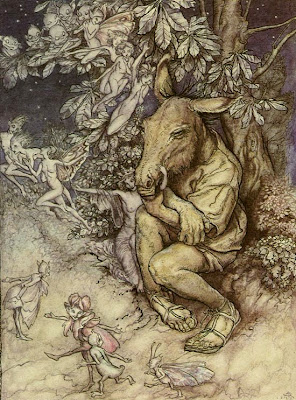 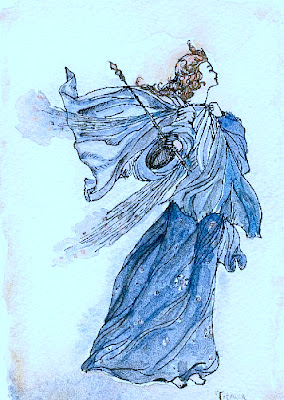 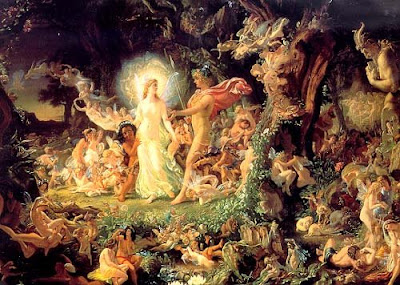 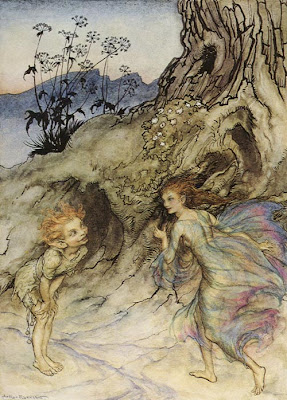 **********
"Puck and A Fairy"
Arthur Rackham
**********
Notice how many of these paintings were done by Arthur Rackham, one of the most famous fairy painters ever. I will be devoting an entire post to his work soon. He is among the best of the "Midsummer Night's" illustrators, which is why I featured so many of his paintings here.
I was also looking for paintings of Puck and Bottom, and found them in Rackham's work. As part of the plot, the mischievous Puck transforms Nick Bottom's head into that of a donkey. Titiania, who has been put under a spell, immediately falls in love with donkey-headed Bottom. Don't worry - although that's a different play, you might say that "All's well that ends well."
~~~~~~~~~~
BE SURE TO GO TO MY "CICELY MARY BARKER" POST, BELOW, AND ENTER THE DRAWING FOR BARKER'S "RETURN TO FAIRYOPOLIS".
Posted by Julie at 8:09 PM

Julie these were wonderful images!
One who believes in the magical world of fairies! NG

Arthur Rackham is one of my all time favorite artist ..
When I look at one of his works I feel pulled into the picture..
I am looking forward to your post on him…

And Michael’s “There Sleeps Titania” is also another favorite picture..

Titiania and I have much in common, we both fell in love with
The face of a donkey….

Smile and have a wonderful day,

Beautiful pictures....but then you always find the best ones. Rackham is definitely one of the best at fairy paintings. And how cool that Fairy Day is also my anniversary!

Once I saw the play it was wonderful(a play within a play)...they even had a reflecting pool on stage.
Hope you enjoyed a lovely midsummer day and hope you are having a Happy Birthday.
Love ya
x

Thanks for sharing all these wonderful faery pictures!

Oh and Happy Birthday!! I hope you have a lovely one!
Sending birthday hugs and faery wishes!

I LOVE Rackham's Titania painting. All that luscious blue.

I didn't post on Tuesday and now I realize I missed your birthday! Aaarrgghhhh! I will have a card for you on my post in the morning:-) Happy Birthday dear friend, I do hope your day was fabulous.

Happy "day after your Birthday"!
Hope it was a good one!
the "Midsummer Night's Dream" movie
with Michelle Pfifer was a visual treat...I need to rent it again!

Beautiful entry. I am a bit groggy this morning so I'll come back to really enjoy it.

And I see I missed your Birthday. Or is it today? -sigh- Anyway, Happy Birthday!

Oh Julie, what lovely fairy posts you've created for us to enjoy. What a joy these little creatures have brought to many an imagination over the years. I certainly believe in the magic of that.
Thank you for your many gestures of friendship. I've been thinking of you and sending love and healing your way.

Goodness...you've enjoyed a birthday! Best wishes to you, and a whole lotta happiness too!
xoxo

Hm, I think it is time I read A Midsummer Night's Dream again.....

Happy Birthday...
I think this is the season for fairy's, I found one in a Jar over at The Feathered Nest.
Love your pictures, they make me smile! Hugs, Mary

Julie, Happy belated Birthday!!! I'm so sorry that I missed it.
I hope you had the very best day ever.
Blessings & hugs ~Mary~ :-}
PS I love your Fairy banner too!

On random, I stumbled past the wonderful post. The "Artist Unknown" is called Tony DiTerlizzi, who has illustrated such wonders as the roleplaying game Changeling: The Dreaming, the Spiderwick Chronicles, Magic: the Gathering-playing cards and so on.

I have given Tony credit for his beautiful painting.